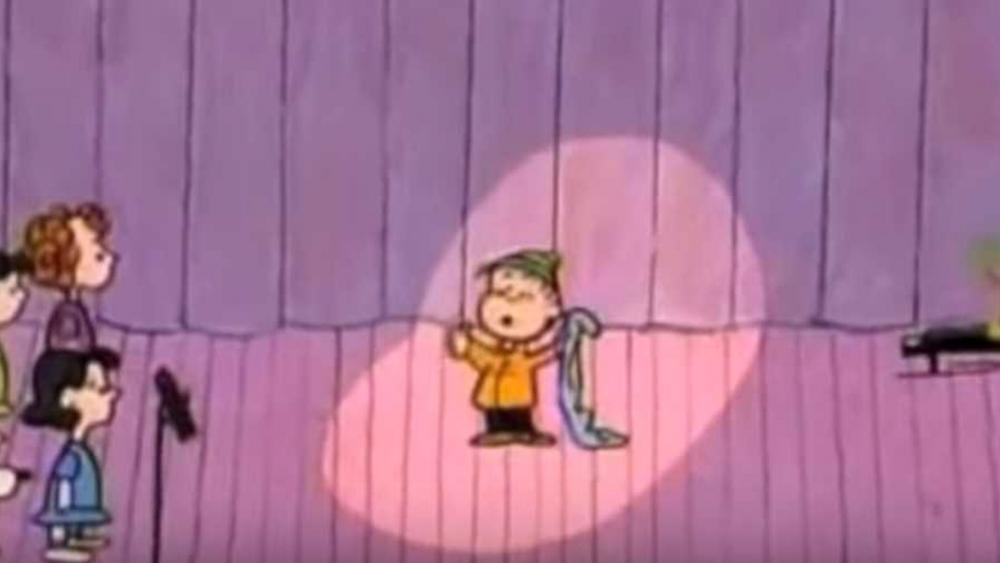 We’ve been watching it for over half a century, and one of the more poetic and symbolic moments of the epic Linus Christmas speech most people have never even noticed.

On December 9th, 1965, CBS aired the animated TV special “A Charlie Brown Christmas” and it was sponsored by Coca-Cola.

The entire special ran 25 minutes and had a production budget just a hair under $100,000. In today’s dollars, that’d be about $750,000 – still a relatively modest budget for this type of programming.

The feature centers around Charlie Brown’s disappointment at the overall commercialization of the Christmas holiday. He eventually decides to put on a play to show everyone the true meaning of Christmas, and while everything in Charlie Brown’s play doesn’t seem to work out (including the now infamous skinny tree), Linus steps in to save the day and explain everything.

Most people have seen the wonderful speech, during which he quotes from the Gospel of Luke.

One thing most people, including this author, have missed every single time they watch this classic piece of TV history, is what happens when he recites Luke 2:10.

Right when he says “Fear not” – Linus drops his security blanket. It remains on the floor for the rest of the speech, and he picks it up when he’s done.

The imagery, of course, represents the hope of the Christian – that we do not have anything to fear, for God is with us. Of course, in our human state, we always end up finding things to worry, be anxious, and even fearful of – so we always go back to whatever our own earthly security blanket is.

If you’ve already noticed it – kudos, you’re pretty observant! If you’re like me and never noticed it – watch again and be amazed you never were able to pick up on that after all these years.

Either way, it’s still every bit as good today as it was back then. Enjoy!

Editor's Note: As the author states, he offers “kudos” to those who have noticed the only time Linus is known to have willingly let go of his blanket. Here are two of those observations in case you would like their take:

"Fear Not:" The Moment Linus Drops the Blanket

Just Drop the Blanket: The Moment You Never Noticed in A Charlie Brown Christmas