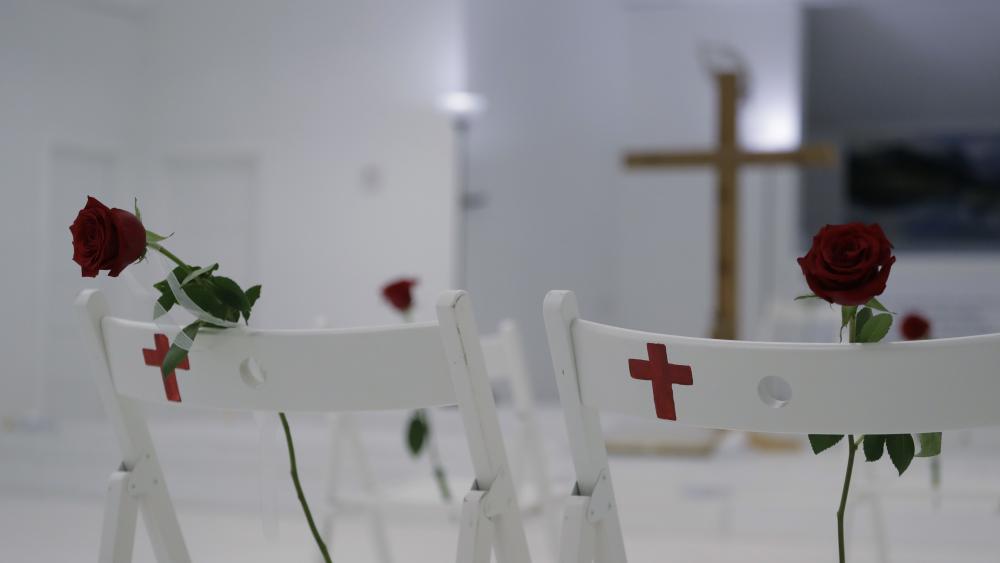 The First Baptist Church in Sutherland Springs opened to the public today and amidst the grief, one visitor gave his life to the Lord.

Mitch Kolenovsky, a field ministry strategist for the Southern Baptists of Texas Convention (SBTC), told CBN News "one man prayed to receive Christ at that chapel."

Since the shooting that took 26 lives one week ago, Baptists have removed the blood-stained carpet and painted the sanctuary white while placing 26 chairs inside to honor those killed.

Kolenovsky said the church will remain open to the public every day for the next week.  The church still has not decided whether or not it will demolish the building but plans to temporarily worship at the site in a tent.

Licensed professional counselors are available at the church as it remains open to the public, mindful that just visiting the site will trigger pain and grief for many.  "We've got people there to help them," said Kolenovsky.

Monday afternoon, the family of 14-year-old Annabelle Pomeroy remembered her in a packed-out service that hundreds attended. Kolenovsky told CBN News she was a "vibrant, vivacious young lady who captured the hearts of many people."

He described her dad, Pastor Frank Pomeroy, as "a rock" who has been at the hospital visited those wounded in the shooting every day since last Sunday.

Tomorrow, a funeral is planned for all nine members of the Holcombe family who lost their lives in the massacre.

The state and the national convention will cover funeral expenses all the victims.  "We want to make sure the families have no funeral expenses," said Jim Richards, executive director of the Southern Baptists of Texas Convention (SBTC).

Southern Baptists will also cover the salary of pastor Pomeroy for the next year.

The convention holds its annual meeting in Dallas this week and has re-worked its schedule to focus on the tragedy.  Monday night's opening session will feature a live report from the area from Kolenovsky.

The SBTC also created a security seminar to address the latest concerns of its 2,650 affiliated churches.  One hundred and seventy have signed up for the seminar which will help churches with the basics of creating a safety plan

The SBTC will host five church security conferences in the next year to help chuches think through not only how to respond to a shooter but how to prepare for weather emergencies, medical emergencies and fire.