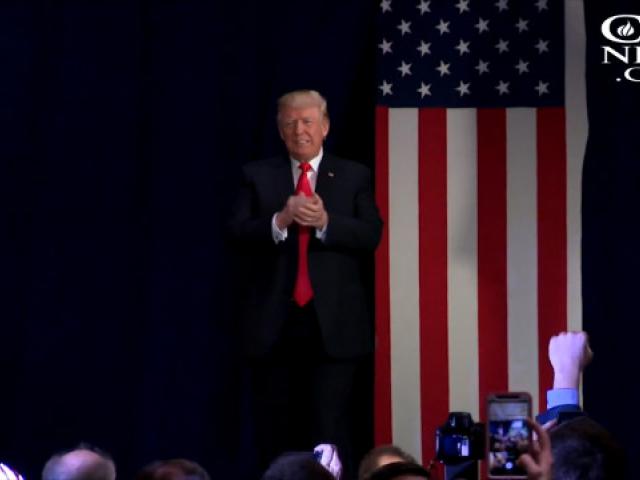 President Trump's plan to give the American people a tax cut by Christmas has moved another step closer to reality.

Debate on a Republican tax reform bill is now under way in the United States Senate.

Republican Sen. John McCain, who wrecked his party's efforts to dismantle Obamacare last summer,  says he will support the tax bill - paving the way for what party leaders hope is full GOP support for the bill.

"It's clear this bill's net effect on our economy would be positive," McCain said in a statement. "This is not a perfect bill, but it is one that would deliver much-needed reform to our tax code, grow the economy, and help Americans keep more of their hard-earned money."

As the Senate debate on tax reform began President Trump made one final push for approving the measure before a crowd in Missouri.

He again voiced optimism that a tax reform bill will be delivered to his desk for signing by Christmas.

At the  St. Louis, rally he said the country is on the verge of a thrilling new era of opportunity and growth

But Democrats have chosen not to support the Republican plan. Debate began with a strong show of Republican party unity, with every GOP senator supporting it. The vote came on straight party lines: 52-48.

"If the president and Republicans in Congress set out to pass a middle class tax cut as they claim. If that's where they set out, this bill completely misses the mark," Schumer said.

President Trump insists the Republican plan will cut taxes by $2,000 for the typical American family of four earning $75,000 annually.

The version of the bill already approved by the House of Representatives cuts the corporate tax rate from 35 percent to 20 percent. But some senators are considering only cutting it 21 to 22 percent. That may help Senate Republicans gain enough support within their own party to pass the bill.

Bumping the rate to 22 percent would raise another $200 billion over the next decade. That would help win the votes of Senate Republicans who want to expand the child tax credit and keep deductions for property and state income tax taxes.

The president wants to keep the corporate rate at 20 percent, but Republicans expect he may likely sign a bill that slightly raises that rate.

"We are going to be celebrating Merry Christmas again and it's going to be done with a big beautiful tax cut. Thank you everybody. God bless you," the president told the Missouri crowd.

Still to be worked out is language that would trigger automatic spending cuts or tax increases if Washington doesn't get as much money in taxes as expected. If the Senate passes its bill, differences with the House bill will have to be worked out in conference committee.