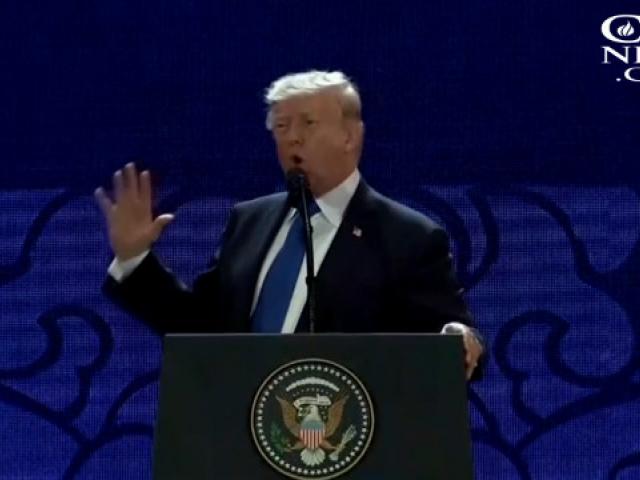 (DA NANG) Vietnam--During his speech at the Asia-Pacific Economic Cooperation Summit, President Trump acknowledged the achievements of the nations represented, but denounced trade practices that he said hurt the United States economy.

"Nothing short of miraculous" is how Trump described the great achievements of the countries and economies represented at the APEC gathering.

"Few would have imagined just a generation ago that leaders of these nations would come together, here in Danang, to deepen our friendships, expand our partnerships and celebrate the amazing achievements of our people," he said.

The president offered a renewed partnership to the nations in the Indo-Pacific but denounced unfair trade practices.

"From this day forward we will compete on a fair and equal basis. We are not going to let the United States be taken advantage of anymore," President Trump insisted. "I am always going to put America first the same way that I expect all of you in this room to put your countries first."

Early in his term, Trump pulled out from the Pacific Rim Trade pact known as the Trans-Pacific Partnership. Some argue that the U.S. was abused by the easy availability of cheap goods and Americans lost jobs overseas.

"That's why President Trump is pushing back with an America First stance. The flight of American manufacturing to China after it opened to foreign trade and investment hurt U.S. workers," explained Duterte.

China's President Xi JinPing addressed the gathering after Trump.He emphasized that as the world's second largest economy, China is fully aware of its responsibility. He said his country will continue to promote fair and social justice.

"China is offering Asia and the world a different vision. Well it's a China-vision led economy, and they have a billion people and they're coming up with economic viability. ...Traditionally been different from the American vision. I think President Trump is just 11 months into his presidency and I'm not sure if he has solidified where he's going on trade," Feldman said.

With APEC-leader economies the United States, China and Japan accounting for 60% of the world's GDP, it is expected their visions are likely to determine the future path of APEC and the world.

And although faced with many challenges, the APEC leaders are committed to continue to promote economic stability and prosperity in the region by working towards a more fair and dignified globalization where no one is left behind.