Would Jesus Stand or Take a Knee During the National Anthem? Players Say Church Divided on Protest 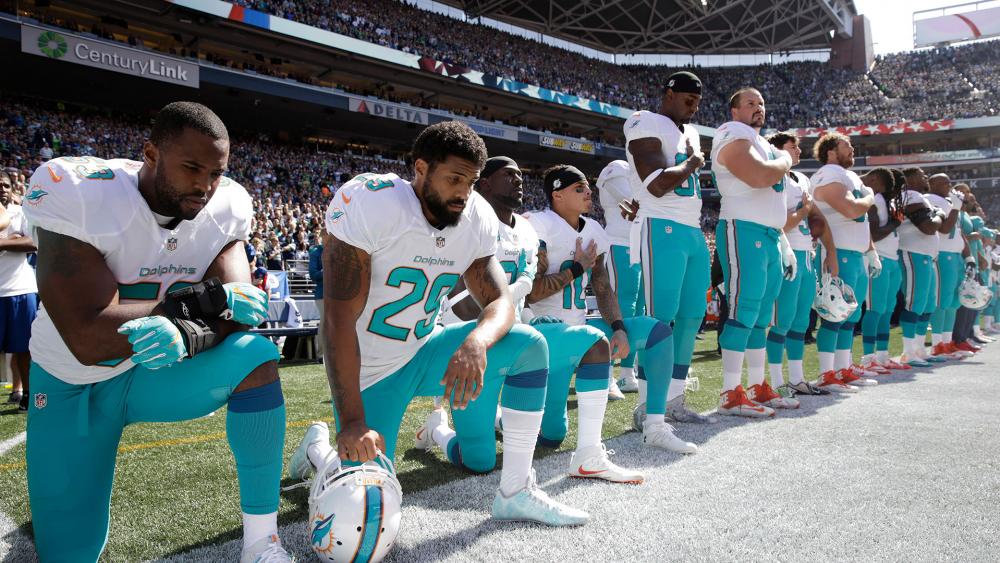 San Francisco 49'er Eric Reid and other Christian pro football players who support Colin Kaepernick's social injustice protest by kneeling during the National Anthem are asking fellow believers who don't agree with them to ask themselves "What would Jesus do? "

Reid, 25, joined his former teammate Kaepernick last year, taking a knee during the playing of "The Star-Bangled Banner."

Reid says they chose to kneel because they felt it was a "respectful gesture."  The gesture was aimed at raising awareness for police brutality against African-Americans and other issues.

The linebacker says he wants to be a "voice for the voiceless," a lesson derived from a Bible verse found in Proverbs.

He says he has discussed faith with Kaepernick, who in the past has also professed his Christian faith.  The former quarterback who led his team to back to back NFC championships and a Super Bowl remains unsigned.

"It's the foundation of why we started doing this," Reid told The Associated Press. "We all have a love for people. The Bible tells us love your brother as yourself so that's why we're doing it."

"We have to speak up for those who can't do it for themselves. My faith is ultimately what led me to start protesting and it's what continues to drive me," he explained.  "Faith without works is dead. I feel like the past year before we started protesting, the Lord has prepped me for this moment."

Reid said he made the decision to kneel for the National Anthem after meeting with Kaepernick and Seahawks long snapper Nat Boyer.  Boyer is a former Green Beret.

However, the movement continues to draw heated criticism from football fans across the country with many fans even deciding to boycott NFL Sunday game broadcasts.

President Donald Trump also entered the fray, suggesting team owners should fire any player who did not stand for the anthem.

Reid said he's "baffled" that some people have misconstrued the player demonstrations as being against the anthem itself, the American flag, the U.S. military or the police.

He's especially frustrated by fellow Christians who continue to angrily call out players.

"I do see some hypocrisy with the people that call themselves Christians," Reid said.  "If you know Jesus, he went into the house of God and turned over the tables and was angry and said they made the house of God into a marketplace so I would say this is something that He would do."

Many Christians, who have watched the players take a knee for social injustice, also can't agree.

"This is not about black, white, brown, red or yellow; it's about respect for the country and its flag, which symbolizes we are 'one' nation under God," said Joseph Bruce Sofia, senior pastor at Gloucester County Community Church in Sewell, New Jersey.

"The national anthem speaks of oneness and not division; it speaks of hope and unity, of poverty to wealth, from the ghetto to the Presidency," he continued.  "The Biblical principle of sowing and reaping is in effect here. Sow discord and we'll reap discord. Oppression is a horrible thing and needs to be taken on head-on, but take it to the town hall or courts or social media but, in my opinion, using the national anthem during a football game draws a line in the wrong sand."

"What we see right now in culture is what's easier? To make this about a flag, which it's never been about, or to actually say Colin, what's your beef? What's your passion? What's going on?" Lentz said. "Our country has a sad history of missing the mark, missing the moment, and deflecting issues. To judge this guy for putting his career on the line for something he's passionate about, I do not understand. It's sad."

"We talk about what Jesus would do. Let's think about that," said Watson, who has been standing for the anthem. "How should I Biblically look at this situation? Is my response as an American going against what my response should be as a Christian? If I'm a Christian, I want to delight in the things that (Christ) delights in and those things are blind. They're not based on color, creed or culture or money."

"Being kind is not predicated on what you can do for me. Justice is not predicated on if I experienced injustice or not. We can advocate for people who have experiences that we don't even have," he explained.  "True justice is blind and righteous. Christians should be about expanding and promoting the gospel. If you listen or think about the subject matter that players and people are concerned about, you could not as someone who reads scripture turn a blind eye to it."

Philadelphia Eagles safety Malcolm Jenkins, one of the founders of The Players Coalition, said the Christian community could effectuate positive change if it wasn't divided.

"As big as we are, as much influence as we have on policy and politics, if the Church ever got behind really being for equality and really being for justice, it would show up, it would come," said Jenkins, who has been raising a fist during the anthem. "But a lot of times we don't show the empathy.  We don't take the time to listen and we're just as segregated as the world is right now."

Watson underlined the importance of both sides listening to each other.

"These guys love America. We're not traitors. We just want this country to be better on some things," Watson said. "When we're able to sit and communicate with one another, it allows us to understand. None of us are perfect."