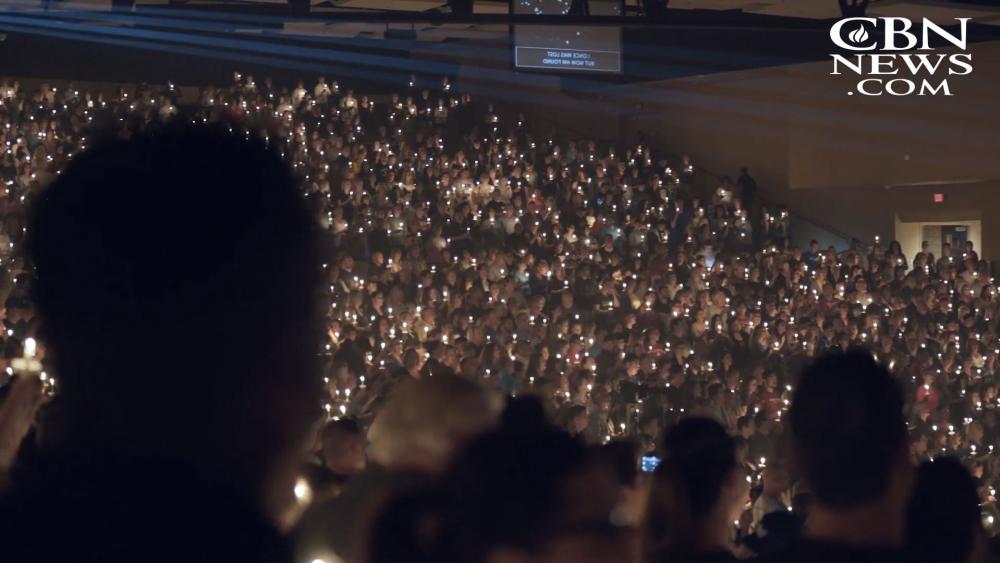 Canyon Ridge Christian Church sits in the northwest suburbs of Las Vegas, 25 miles from the Strip, but its congregation is deeply affected by the Sunday night massacre at the Mandalay Bay Resort and Casino. Many police officers attend services as well as entertainment and hospitality workers.

Executive Pastor Mitch Harrison told CBN News, "Many of our people that attend our church, that live in our community are people that work, have jobs, in and around the Strip and the hotels and the entertainment – we're the bedroom community for the industry."

More than 6,000 worship at services every weekend, and Monday night more than 3,000 came to a candlelight prayer vigil to try and process the tragedy that had just taken place.

"It feels like it's one of those things that kind of shakes everyone awake and helps them realize that there's more to life than just living for superficial temporal things," said Harrison.

Many that came, he said, admitted they rarely go to church. "People were showing up and saying, 'I haven't been to church in years but I need faith in my life,'" said Harrison.

The service opened with music designed to help people express the pain they're experiencing along with the anger, sadness, fear and confusion.

Pastors read scripture that spoke about the Lord being our light as they asked people to light their candles.

The candles, said Harrison, proved to be a fitting metaphor for what the church believes is happening in a city known more for its sin than Gospel witness.

"You look for any opportunity for the light to come shining through the darkness and in moments like this," he said, "we believe what John said 'the light has come into this world and the darkness has not overcome it.'"

Harrison said people in Las Vegas are surprised to see the city unifying so well in this moment.

"People are amazed at how the people of Las Vegas are rallying together to support each other, to care for one another in a city that is known for a lot of other things," he observed.

Carolyn Goodman, the mayor of Las Vegas, called pastors and the community together for a prayer vigil at City Hall late Monday. A spokeswoman said she has a history of working with Las Vegas faith groups on a variety of issues ranging from drug addiction to homelessness.

For Harrison, the mayor's prayer vigil was a positive sign. "There's a welcoming of what the church community is doing to meet the spiritual needs of our community," said Harrison.

For now, Canyon Ridge is trying to assess where it can best meet the city's needs. It's keeping its chapel open all week for prayer. It's working with a local blood center to organize a blood drive on its campus and it's ministering to the many police officers and those employed by the entertainment and hospitality industries that attend its services.

Many who work in the hotels and casinos on the Strip are unable to work right now because their businesses are closed, but Harrison expects they will soon be going back to work. "We're going to be watching that pretty closely," he said.

The church is also thinking about Sunday and how best to plan services that will meet needs at that point in time.

While Harrison is quick to point out that he would never wish for such a tragedy he's also very aware of the opportunity the church has right now.

"We feel a huge responsibility in these moments to help people find their way back to God and we believe that God wants that too," he said.