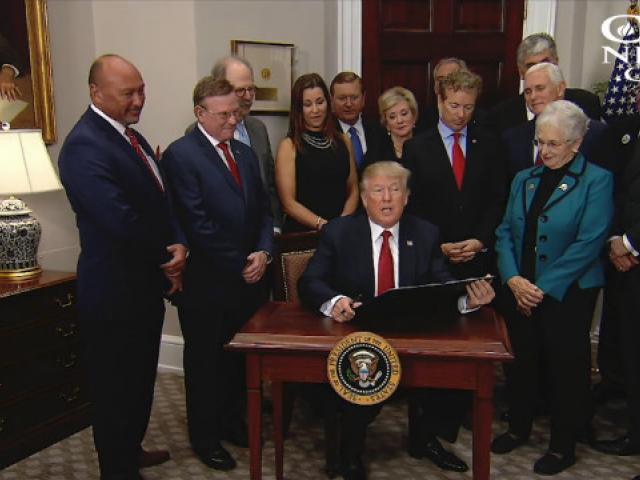 President Donald Trump has taken a step to roll back another part of President Obama's legacy – Obamacare.

Congress couldn't get the job done on repeal and replace of Obamacare, so a frustrated President Trump took matters into his own hands.

Thursday, he signed an executive order which he said will provide Americans with better and less costly healthcare.

After making a few remarks, the president warmly greeted those who came to see him sign a new executive order on healthcare. Vice President Mike Pence reminded him he had yet to sign the document.

But Democrats argue it will be costly to those covered by Obamcare – especially the sick. Former Obama economic advisor Austan Goolsbee told MSNBC, "That would be a catastrophic decision that will lead to millions of people losing their insurance."

The president is ending some of Washington's key subsidies for Obamacare. He says the government cannot legally pay $7 billion dollars in Obamacare co-pays and deductibles because Congress has never appropriated specific money to do it. Trump insists the money would be better going to directly to the states for them to handle it.

The executive decision also allows insurance to be purchased across state lines.

"So, this is promoting healthcare, choice and competition all across the United States. This is going to be something that millions and millions of people will be signing up for and they're going to be very happy. This will be great healthcare," the president proclaimed.

"The president is sabotaging healthcare and we have no action in the Congress," said House Minority Leader Nancy Pelosi, D-Calif.

And while the president says his executive order is the first step in repealing and replacing Obamacare – something the Senate has failed to do three times this year – House Speaker Paul Ryan, R-Wis., says legislating healthcare is best left up to Congress.

"If you first don't succeed, try, try again. So we just keep telling our Senate friends just keep at it."