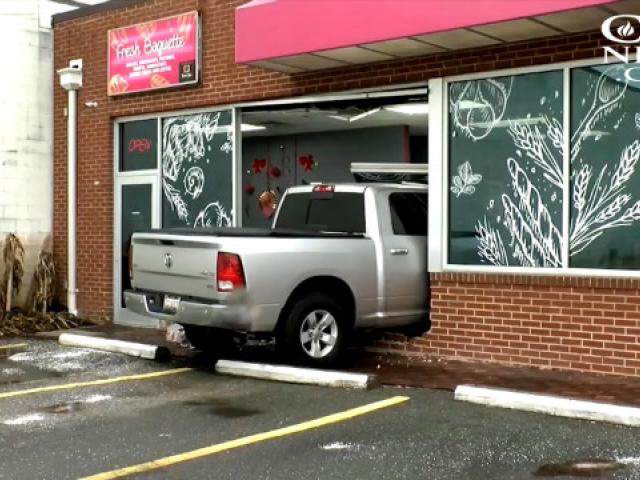 A monster winter storm has brought snow and ice to the eastern half of the United States.

Slick road conditions have wreaked havoc on motorists from Iowa to New England.

Just outside Washington, DC, a man driving a pickup truck lost control in a slick parking lot and crashed through the walls of a Maryland bakery shop.

Driver Adam Trejo said, "I started applying my brakes as I came in, ice took hold and the truck had a mind of its own and went into the building."

In New Haven, Connecticut a FedEx truck driver on a delivery hit an icy patch and skidded down a neighborhood street.

It was all because of the latest winter storm and it brought death and destruction as it moved across the Plains and into the Northeast.

Parts of western Ohio and Pennsylvania received up to nine inches of snow.

Erie, Pennsylvania broke its all-time snowfall record with more than 12-feet of snow. The average snow accumulation for the city by early February is about half that amount.

And some headaches for commuters – just outside New York City, multiple car accidents caused a bridge to shut down.

Slick roads wreaked havoc on parts of the South, as well. In Arkansas, several motorists were injured as their cars were mangled and overturned. The driver of one car was forced to make a split second decision.

"I had to either hit the cars that were turned over, hit the car that was spinning out in front of me, or come down into this ravine, and I chose the ravine," John Boyd explained.

In Texas, a car crash cost a driver his life, and in Georgia, high winds damaged trees and structures west of Atlanta. A garage was even moved off its foundation.

On the East Coast, flights were cancelled or delayed. At BWI Airport, Federal Aviation officials are investigating what caused a Southwest Airlines flight to skid off the runway. All 149 people on board evacuated safely.

Meanwhile, in New Hampshire they're digging out from seven inches of snow and some beleagured residents say they're ready for winter to come to an end.

"It probably won't be, but I'm hoping it is...I think we've had enough," said one Penacook resident.

Others had a more positive attitude.