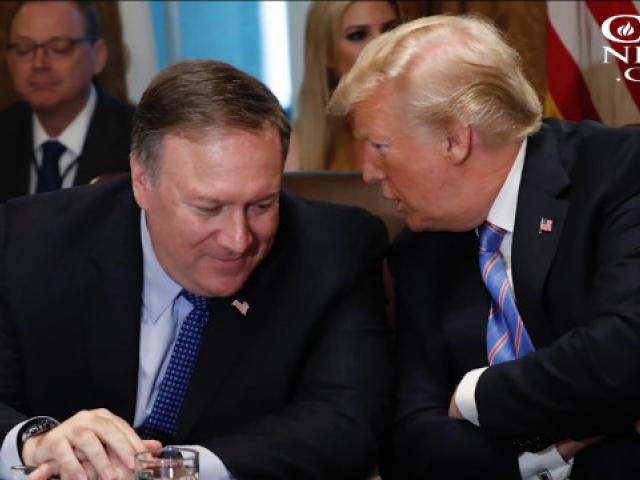 WASHINGTON - In an interview with CBN News, Secretary of State Mike Pompeo says the United States will not agree to Vladimir Putin's request for certain American citizens to be interrogated by Russian officials in exchange for help with the 12 Russians who were indicted for election hacking.

"That's not going to happen," Secretary Pompeo says from the Treaty Room at the State Department. "The administration is not going to send, force Americans to travel to Russia to be interrogated by Vladimir Putin and his team."  The White House had previously said they would be discussing Putin's offer.

CBN News EXCLUSIVE: Pompeo Says US Will Not Send Americans to Be Interrogated by Russia

Secretary Pompeo also pushed back against critics from both political parties who believe President Trump was too cozy with Putin in Helsinki, Finland, earlier this week.

"There's been a lot of heat and relatively little light in the past few days about the president's visit to Helsinki," Pompeo says. "But make no mistake: President Trump understands that Russia doesn't share our interests in every place and so he was very clear with Vladimir Putin about that."

Pompeo says he's hopeful that the private meeting between the two leaders will ultimately be fruitful.

"He went there with the objective to create the opportunity for leaders of these two powers that own enormous nuclear capacity to have a channel to communicate," he says. "There were places they found overlap. We're going to work on counterterrorism together. We're hopeful that on some of these grand arms control issues, that are very important to the world, that there may well be a path forward."

As for the question of whether Russia is still trying to spy on the United States, Pompeo says Russia's track record is pretty clear.

But he says this administration will not back down from Russia's espionage efforts.

"We're going to do our level best to stop them and when we don't stop them we will call them out for it and make sure they understand that that type of behavior is unacceptable," he says. "This administration has been incredibly tough on Russia. We're proud of that and I'm confident we'll have to continue to do so as there's still Russian behavior that is inconsistent with a good relationship between our two countries."

He believes the mainstream media has been going overboard with their anti-Trump coverage. Some have said that when Trump equated America and Russia on the hacking issue, it was 'open treason.'

"It's silly. I actually looked back at some of the senators' statements when Obama was president, was Barack Obama," he says. "They were talking about the need for an important, good relationship…Somehow they have either changed their mind or they've become pure political hacks. I suspect it's the later and not the former."

Pompeo sat down with CBN News to discuss the importance of next week's ministerial conference to advance religious freedom.  The secretary of state will lead the event that will be attended by government officials, religious leaders and many more.

CBN News will have in-depth coverage of that significant event next week, but Pompeo told us that his views on religious freedom come from his deep faith.

"It's very consistent with what the Trump administration is trying to achieve with respect to religious freedom but it also fits with my worldview," Pompeo says. "I'm an evangelical Christian. I know that not everyone shares that faith but it's important. It's important not only to Christians but to people of all faiths have the capacity to worship in the way that they desire, that they do so without fear of retribution from their government, or the risks that they'll be punished, or not have the ability to raise themselves and their families in the faith way they want to."

Meanwhile, the secretary of state also weighed in on the religious freedom case of Pastor Andrew Brunson. Just recently, a Turkish court ordered the pastor from North Carolina back to jail.

The United States government says he's been unjustly detained in Turkey for two years on false terrorism charges when Turkish President Erdogan began cracking down against his political enemies. Erdogan's government claims Brunson worked for one of those political opponents. The case lacks evidence and Pompeo had this message for President Erdogan of Turkey.

"Time for Pastor Brunson to return home and to be free," Pompeo tells CBN News. "We worked diligently; the president personally has worked diligently on this issue. This is an example where a higher degree of religious freedom around the world would create less risk, not only for the citizens of their own country but for Americans as they travel abroad."

"Pastor Brunson's case is very much a focus of the team that I lead here at the State Department," he says. "And we're optimistic in the days and weeks ahead, we'll get a good outcome for Pastor Brunson, his family and frankly for many of those that are held in places around the world."