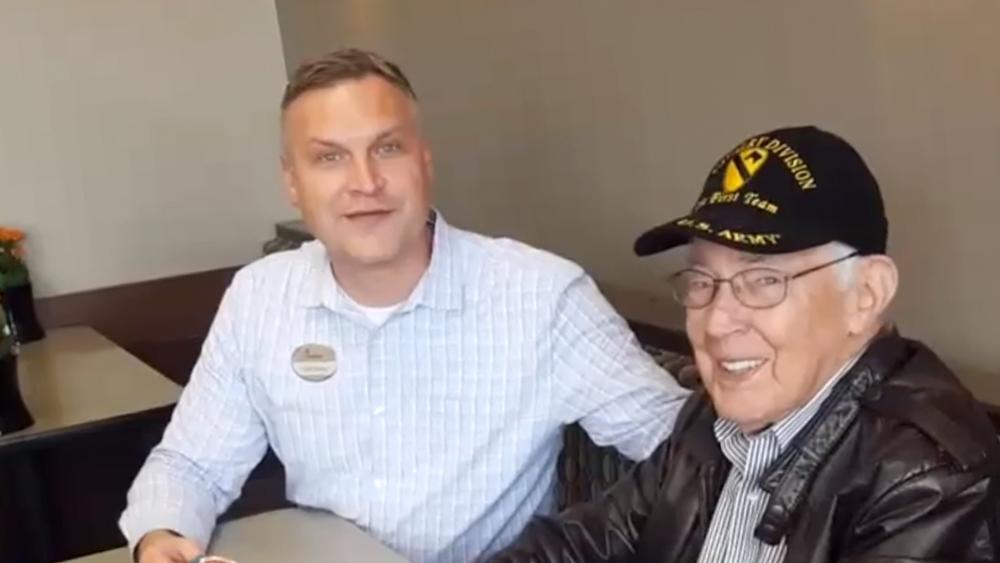 A Chick-fil-A restaurant in Avon, Indiana just honored one of their favorite customers with free food for life.

Ernie, a World War II veteran, first started coming to the restaurant about a year ago.  Now, he comes back for a lunch of chicken nuggets and root beer nearly every day.

At the age of 92, Ernie still drives and works around his house.

"We were just fascinated because he's always like 'oh I just mowed my lawn,'" Executive Director Melissa Luebbert told the station. "And he push-mows!"

Ernie was in fact so friendly that all of the restaurant's employees got to know him.

"All of us take turns sitting with him and eating with him," said team leader Amy Chambliss. "We just enjoy his company."

In an effort to honor Ernie for his service, employee James Cooke came up with an idea. He suggested that Ernie would no longer have to pay for his meals at Chick-fil-A.  So he spoke to Tincher and Luebbert about his idea.

On Nov. 12, the trio decided to tell Ernie about Cooke's idea.

"James came up with a really good idea as we were thinking of how to honor you," Tincher told Ernie in a video posted to Facebook.

"He said 'what if when Ernie came in, he never had to pay for Chick-fil-A again, when he came to our restaurant?' So that was James' idea, he wanted to honor you. So we wanted to say every time you come into this restaurant, you're family now. So you no longer have to pay for any of your meals," Tincher said.

In the video, Ernie begins to refuse the offer and tells Tincher "that's not fair to you guys."

But Tincher, a veteran himself, tells him "we're actually telling the whole world now.  We just want to thank you.  When you come in, you make us feel so special."

"It was kind of a shock to me," Ernie said. "I didn't think I really deserved a free meal."

Tincher told the television station that Ernie's company means more to the restaurant than his money.

"He really does make people feel special," Tincher said. "He's almost more important to our staff than we are to him."

"I wouldn't know what to do without him," Luebbert said. "He is definitely a bright spot in our day."

Even though Ernie can choose any menu item he wants for free, the restaurant reports he still keeps ordering the same kid's meal.

And Ernie says he's thankful for all of his new friends.

Watch Tincher and the other employees tell Ernie about their idea.