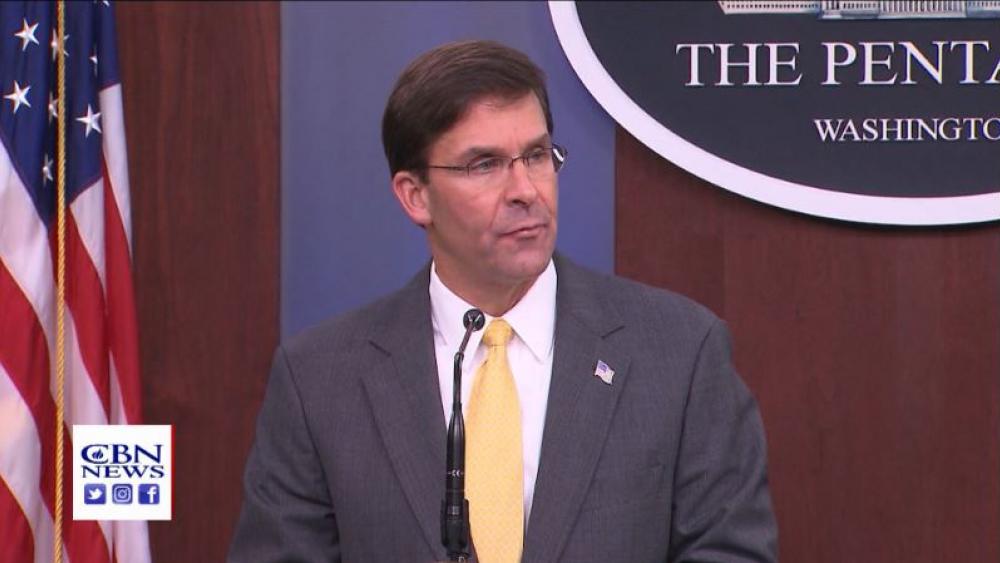 Michael O'Hanlon is a senior fellow, and director of research, in Foreign Policy at the Brookings Institution, where he specializes in U.S. defense strategy, the use of military force, and American national security policy.  He appeared on Monday's edition of CBN News' Faith Nation to discuss the negotiations with the Taliban and the issues Secretary Esper and his team must prioritize.

The new US Secretary of Defense held his first press briefing at the Pentagon Wednesday to explain his top priorities.

Secretary Mark Esper was joined by Gen. Joseph F. Dunford, the chairman of the Joint Chiefs of Staff for the briefing.

Esper says it's his commitment to be more communicative with the media and the American people.

That's just one of the significant changes he says he's made in his first 30 days in office.

The secretary says he has started having meetings every Monday with Pentagon leadership to make sure everyone is on the same page where objectives are concerned.

He's also initiated a defense-wide review process to see where resources need to be reallocated to better support the national defense strategy.

The secretary listed four points of the strategy.

"Building a more lethal force, strengthening our alliances and partnerships, and third, reforming the department for better business practices," Esper said. "And I added a line of effort four for me -- taking care of service members and their families."

There were lots of questions about Afghanistan and how the negotiations with the Taliban are going. The secretary and Gen. Dunford were very clear though reluctant to give any specifics beyond what has already been said. But there was an underscored emphasis that Afghanistan cannot become a theater from which the US can be threatened.

And there was one other point Dunford stressed regarding the negotiations.

"I think an agreement that can initiate inter-Afghan dialogue potentially leading to a reduction in violence associated with the insurgency is something that's worth trying," Dunford said. "Any agreement that we have moving forward is going to be conditions-based.  And so those conditions is what makes me confident that its worth trying.

Beyond that, they were not willing to go into any details like a timetable of any potential troop withdrawal. In fact, Dunford said he's reluctant to even use the word "withdrawal" right now.

Just about every hot button issue you can think of was touched on in Wednesday's briefing -- North Korea, South Korea, China and, of course, Iran.

Both Esper and Dunford seemed heartened by the US ability to deter further provocative behavior from Tehran in recent days. But they know there's still much work to be done there.

One other issue briefly touched on was politics. There were many questions about how much politics play into what goes on at the Pentagon if at all. Both men said they're committed to remaining apolitical and they're confident their rank and file will follow their lead.