The Faith of Our Fathers: God and the American Revolution 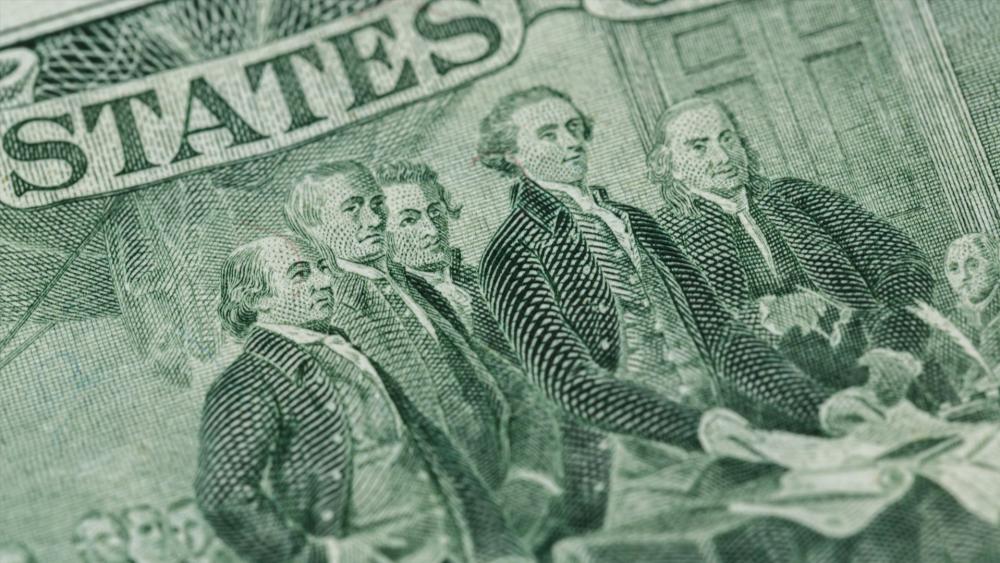 Many people are unaware of America's Judeo-Christian heritage. The following are short profiles of some of America's founding fathers, sharing their thoughts on how God's hand could be seen in the establishment of this nation.

In June of 1776, John Adams was in Philadelphia, deep in the flurry of political activity. The Continental Congress appointed him, along with Thomas Jefferson and three others, to draft a "Declaration of Independence" from England. Although Adams was later to become the second president of the United States, he is best remembered for being one of the great minds and statesmen of the American Revolution. His prolific diaries, letters, and books provide an invaluable insight into the politics of the time and to what liberty meant to the founding fathers.

Freedom, Adams believed, did not rest solely on man. Instead, he wrote, "It is religion and morality alone, which can establish the principles upon which freedom can securely stand ... the only foundation for a free constitution is pure virtues, and if this cannot be inspired into our people, in a greater measure, than they have it now, they may change their rulers, and the forms of government, but they will not obtain a lasting liberty" (letter to cousin Zabdiel Adams, June 21, 1776).

John Adams would face another difficult situation as the second president of the United States in 1798. He had a hard act to follow -- the popular George Washington. Although he tried to avoid the trap of partisan politics, Adams soon found himself caught in its web. And if trouble at home wasn't bad enough, diplomatic relations with France were rapidly sinking. Adams prepared the American army and navy for defensive measures against France.

It was during this time that Adams spoke to the first brigade of the militia of Massachusetts, and re-affirmed the foundations for the American government:

"We have no government armed with power capable of contending with human passions unbridled by morality and religion," Adams said. "Avarice, ambition, revenge, or gallantry would break the strongest cords of our constitution as a whale goes through a net. Our constitution was made only for a moral and religious people. It is wholly inadequate to the government of any other."

Thomas Jefferson was just 33 years old when he was given the task of writing the Declaration of Independence. His knowledge of political philosophy, his eloquence as a writer, and his belief in natural rights made him a leader among the patriots.

But he was not without his political problems. Jefferson's opponents often portrayed him as an infidel and an atheist. But in reality he was a staunch supporter of the freedom of religion and considered it a very personal matter -- one he often pondered in his writings. The man who gave us the immortal words "when in the course of human events" also gave us these reflections on God and his role in freedom. Etched in the marble of the Jefferson Memorial in his honor are these words:

"...God who gave us life gave us liberty. Can the liberties of a nation be thought secure when we have removed a conviction that these liberties are the gift of God? Indeed I tremble for my country when I reflect God is just, that his justice cannot sleep forever" (from notes on the state of Virginia).

In the early 1780's, Jefferson was drafting a plan for future territories of the United States. Much of this plan became incorporated into the Northwest Ordinance of 1787, which established guidelines for territories applying for statehood. Under this law, any new states added to the nation would be recognized as equals with the original 13 states and not as colonies. The ordinance's provisions for the states included self-government, religious tolerance and the prohibition of slavery.

Jefferson's belief in the unquestionable relationship between good government and religious freedom is reflected in article three of the Northwest Ordinance, where he writes:

"Religion, morality and knowledge being necessary to good government and the happiness of mankind, schools and the means of education shall forever be encouraged."

Noah Webster's dictionaries, spellers, and grammars shaped the education of America in the 18th century and his legacy still lives on today. As author of the first American dictionary and a son of the American Revolution, Webster sought to give the new country a different kind of freedom -- a culture of its own. Webster considered his most important project his revision of the King James Bible. He wanted to make it accessible to every American. He believed God played an important part in the education of the people and in the preservation of the American experiment.

Here is his advice on how to choose the nation's leaders:

"When you become entitled to exercise the right of voting for public officers, let it be impressed on your mind that God commands you to choose for rulers, just men who will rule in the fear of God. The preservation of a republican government depends on the faithful discharge of this duty; if the citizens neglect their duty, and place unprincipled men in office, the government will soon be corrupted" ("Advice to the Young" from Value of the Bible and Excellence of the Christian Religion, 1834).

Benjamin Franklin's role in drafting the Declaration of Independence was far from his first invention. The founding father contributed to America both in politics and in science. From almanacs and kite flying, to serving as ambassador and statesman, Benjamin Franklin was truly one of the most versatile of America's founding fathers. Franklin's scientific mind also led to many intellectual and philosophical discussions.

Although he was not a regular church-goer in his adult life, he expressed the importance of implementing God's moral values in all aspects of life. His writings demonstrate an acknowledgement of God that transcended the scientific mysteries Franklin longed to answer. In 1731 he articulated a creed to live by, both personally and in public life:

"That there is one God, Father of the universe. That He is infinitely good, powerful and wise. That He is omnipresent. That He ought to be worshipped, by adoration prayer and thanksgiving both in public and private."

In the summer of 1787, delegates to the Constitutional Convention in Philadelphia had been in bitter debate for ten long weeks. Tempers flared over heated issues between the northern and southern states. As tensions rose, some delegates threatened to pull out of the convention altogether, leaving the fledgling nation without a strong constitution.

When it looked like no one would ever be able to agree, the elder statesman of group took charge. 81 year-old Benjamin Franklin stood to his feet. And although he was not known to be devoutly religious, he gave this contentious gathering a stirring call for prayer.

"I have lived, sir, a long time, and the longer I live, the more convincing proofs I see of this truth, that God governs in the affairs of men. And if a sparrow cannot fall to the ground without His notice, is it probable that an empire can rise without His aid? ... I also believe that without His concurring aid we shall succeed in this political building no better, than the builders of Babel … Therefore, I beg leave to move that henceforth prayers imploring the assistance of heaven, and its blessings on our deliberations be held in this assembly every morning..."

Benjamin Rush's impact on America did not stop with his signature on the Declaration of Independence. Although he was a member of the Continental Congress, Rush was also one of the most influential physicians in early America. He served as the continental army's Surgeon General during the American Revolution.

Under President John Adams, Rush was Treasurer of the United States Mint. More notably, the statesman encouraged support for building more African churches in Philadelphia. Rush was convinced this would reduce high black prison populations, since many of the convicted served time for stealing food and clothing.

Benjamin Rush's advocacy reflected earlier writings of his beliefs in a strong religious and moral foundation for all people. In 1806 he wrote:

"The only foundation for a useful education in a republic is to be laid in religion. Without this there can be no virtue, and without virtue there can be no liberty, and liberty is the object and life of all republican governments."

Little did William Penn know that his vision of establishing a society that was godly, virtuous and exemplary for all would one day birth the freedoms of a nation. After establishing Pennsylvania with land granted by King Charles the second, Penn set out to plan a city called Philadelphia. Years later William Penn's historic city would become the first capital of the United States and out of it the nation's foundational structure would be laid.

Although Penn is best remembered for his vision of a democratic government and peaceful co-existence with the native Indians, in 1682, William Penn's beliefs of government fundamentals echo those of biblical principles:

"It is impossible, Penn wrote, that any people of government should ever prosper, where men render not unto God, that which is God's, as well as to Caesar, that which is Caesar's."

One of the lesser-known patriots and founding fathers of our nation was Scottish born James Wilson. The young lawyer's writings on the British Parliament's authority impressed members of the continental congress so much they elected him to the body in 1775. The following year, Wilson signed the Declaration of Independence and later the United States Constitution.

Serving as a United States Supreme Court Justice until his death, James Wilson realized there was a much higher law than man's to consider. When questioning what the ultimate cause of moral obligation is, Wilson determined, "I give it this answer, the will of God. This is the supreme law. His just and full right of imposing laws, and our duty in obeying them, are the sources of our moral obligations."

In May of 1776, fighting was well under way in the American Revolution. For General George Washington it was a stressful time. Under his command in New York he had about 7 thousand men. The rag tag army was poorly trained. They were about to face some thirty thousand soldiers from the most highly trained and successful military force in the world. The Americans were outnumbered and outgunned. As they waited in New York for the onslaught of British military power, Washington issued orders for his troops to pray for the campaign ahead.

On May 17, 1776, he wrote that that day was, "...to be observed as a day of fasting humiliation and prayer, humbly to supplicate the mercy of almighty God, that it would please Him to pardon all our manifold sins and transgressions, and to prosper the arms of the united colonies, and finally establish the peace and freedom of America upon a solid and lasting foundation."

After the Revolution, Washington was elected America's first president. Years later, as he prepared to leave office and return to his beloved Mount Vernon, foremost in his mind was the need for the young nation to stay neutral on foreign issues until it grew stronger. George Washington chose to send this message to the nation in a farewell address -- not in a speech, but in the September, 1796 Philadelphia newspapers. In it, the president advised Americans to value the newly formed republic and its constitution. But Washington cautioned that the country's success depended not only on national strength but also on two essential factors:

"Of all the dispositions and habits which lead to political prosperity, religion and morality are indispensable supports."