'We Are Proudly Defending the Sanctity of Life': Trump Touts Pro-Life Record at 'Road to Majority' Conference 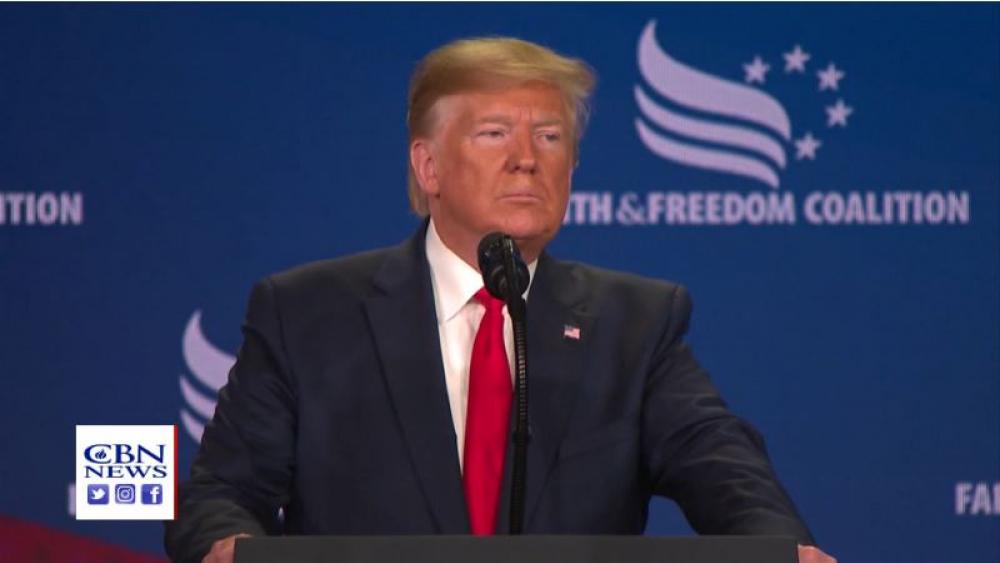 WASHINGTON - Judicial appointments, abortion, criminal justice reform -- all issues of importance to many evangelicals and they were all issues President Trump brought up Wednesday as he spoke to supporters at a conference in the nation's capitol.

Trump addressed a friendly, exuberant crowd at the Faith and Freedom Coalition's Road to Majority conference, touting what he says were promises made and kept to his evangelical voting base.

The biggest applause from the audience greeted his pro-life record.

"We are proudly defending the sanctity of life," Trump said, followed by crowd chants of  "Four more years."

"Every child born and unborn is made in the holy image of God and that is why I have asked Congress to prohibit the late-term abortion of babies and they'll do that," he said.

Another positive response from the crowd is his impact not just on the Supreme Court, but lower courts, as well.

"I will soon appoint my 145th judge to interpret the Constitution as written," the President said.

Trump also mentioned another big factor in why 81 percent of white evangelicals supported him in 2016.

"Democrats are determined to pack the courts with radical left judges who will oppose their own far left views on the American people," Trump noted.

The President also hit on plans for the future.

"If we win the House back, keep the Senate and keep the presidency, we're going to have a plan that blows away Obamacare. It'll be less expensive and it'll be far better health insurance and we'll be announcing it over the next month or so," he said.

Going back on previous statements that voters will have to wait until after 2020 for the GOP health care plan, Trump explained what Democrats are offering Americans.

"The choice of out future has never been clearer," he said. "The radical left offers a vision of socialism, censorship, high taxes, open borders and extreme late-term abortion.

The President also took a few swings at his Democrat opponents, including "Sleepy Joe Biden."

He admitted one thing he admires about the Democrat Party to the conference's audience.

"They stick together," Trump noted. "They vote in a group. Uou don't see them going haywire."

"We know that faith and prayer, not federal regulation defines the moral character of our country," Trump said.

The event continues through June 29 with other notable speakers, including Vice President Mike Pence and Senate Majority Leader Mitch McConnell.

The "Road to Majority" conference is the premier national event for people of faith and conservative activists, according to the Faith and Freedom Coalition's website.