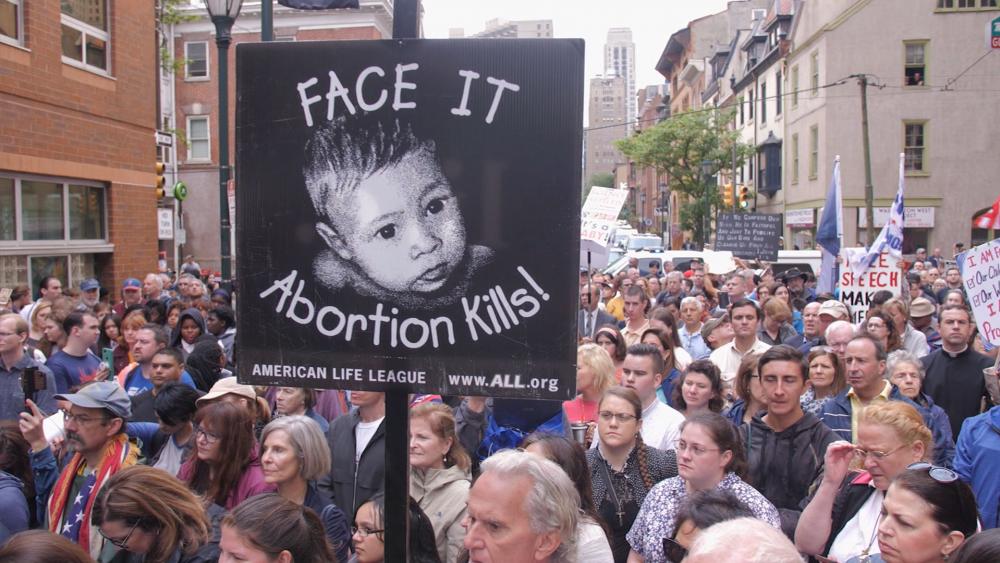 Pro-lifers rally in Philadelphia (Photo: CBN News)
6036270433001
Pro-Lifers Pack Street at Philly Planned Parenthood: 'We Are Not Going to Continue to Be Bullied'

As CBN News has reported, state Rep. Brian Sims (D) put out a video of himself blasting a woman who was merely praying a few feet from the Elizabeth Blackwell Planned Parenthood clinic. "An old white lady telling women what to do with their bodies," he said.

Sims then basically offered a bounty for information on three teenage girls praying at the same clinic.

He called them, "A bunch of pseudo-Christian protestors who've been out here shaming young girls for being here. So here's the deal: I've got $100 to anybody who'll identify any of these three."

The pro-life advocates who came to this clinic told CBN News they won't be intimidated or stopped because abortion must be fought.

She said, "We are not going to continue to be bullied as pro-lifers. I'm sick of this idea that just because we are Christians, we cannot stand up and defend ourselves, that we cannot defend our unborn brothers and sisters."

Claire Howson offers prayers and counsel outside a New Jersey abortion clinic and told CBN News, "We need to be able to be out there and offer alternatives to these women going in."

Lila Rose of Live Action told the rally, "We're calling on Rep. Brian Sims and all those who dare to harass and violate First Amendment rights of the constituents here in Philadelphia to step down." Sims accuses the pro-lifers of targeting and hurting women. But Meg Phillips told CBN News it actually hurts women if they're not warned about the physical and mental impact an abortion can have on them.

Confessing she'd had an abortion, she stated, "First of all, unless you've had an abortion, I don't think you have any right to talk about it, because you don't know the experience. And quite frankly, most people who have wouldn't wish it on their worst enemy. Because the emotional aftermath never, never, ever leaves you."

National pro-life leaders came to here to call on Sims to stop trying to shame women and girls who are exercising their rights.   They saw the true shame is the 61 million lives lost since the Supreme Court decision legalizing abortion.

That's why these and countless others plan to remain praying and counseling outside this and other clinics across the country.