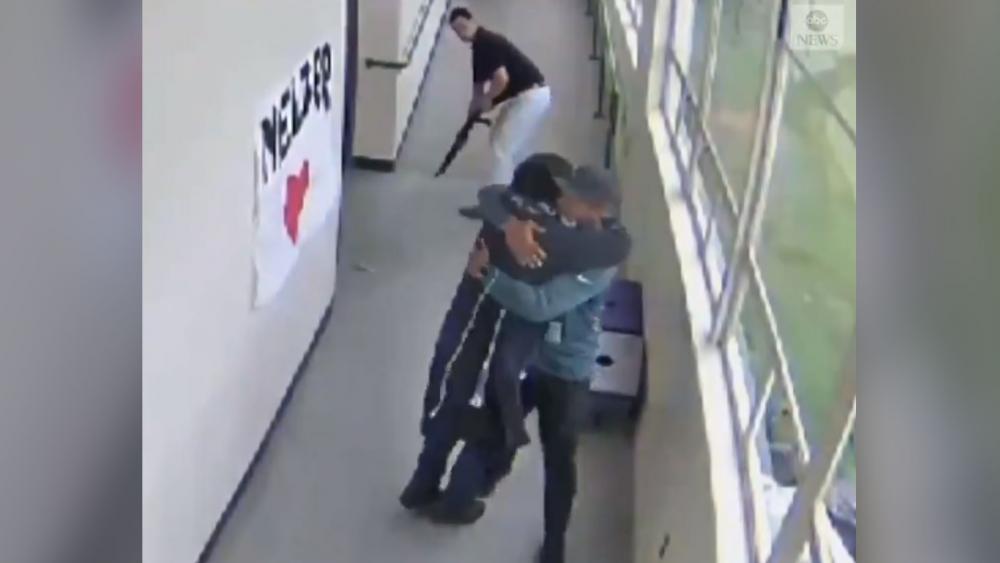 A potential school shooting was prevented when a Portland, Oregon student holding a rifle was disarmed by a high school coach.

Stunning surveillance footage captured the moment a high school coach in Oregon disarmed a student with a shotgun and then embraced him. Police eventually arrived and took the student into custody. https://t.co/a5artNKKlJ pic.twitter.com/rIKG9Phl0e

The heroic act was caught on surveillance video at Parkrose High School. Keanon Lowe, a track and football coach, is seen on the video walking into a classroom and then is dramatically seen emerging out of the classroom with a shotgun which he took from a student.

While backing away from the student another teacher runs over and takes the shotgun away from Keanon Lowe who then hugs the student, Angel Granados-Diaz. Angel tries to break free but Keanon continues holding the student.

ABC News reported, “Lowe, a former Oregon Ducks football player, told the station that when the student entered the classroom with the weapon, he was close enough that he lunged for the gun and grabbed it with both hands.” The surveillance video captures the emotional moments after this tense situation.

Keanon said, “Then it was just me and that student. It was a real emotional time. It was emotional for him, it was emotional for me. In that time, I felt compassion for him. A lot of times, especially when you’re young, you don’t realize what you’re doing until it’s over.”

Responses on Twitter are hailing Keanon as a hero for his act of bravery and compassion in a desperate moment.