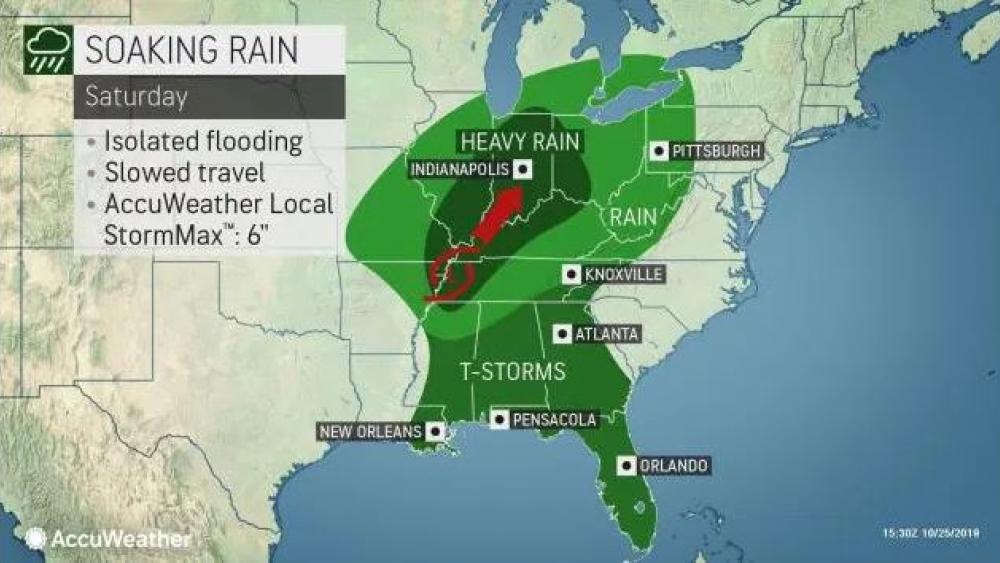 A pair of storm systems, one of which is Tropical Depression 17, will unleash torrential rain from the central Gulf Coast to the lower Mississippi, Tennessee and Ohio valleys into this weekend.

Tropical Depression 17 formed in the Gulf of Mexico during Friday morning and may garner tropical-storm status before moving ashore Friday night. A large, non-tropical storm over the South Central states will absorb the tropical feature and its moisture this weekend.

A general 3-5 inches of rain is forecast to fall from the central Gulf coast to southern Illinois and southern Indiana with an AccuWeather Local StormMax™ of 6 inches in parts of Mississippi, Louisiana, eastern Arkansas, western Alabama, and Tennessee.

Even though long-term drought conditions exist in part of this area and the rain will be beneficial in that respect, the anticipated rainfall is enough to trigger urban and low-lying area flooding.

The first day of the Voodoo Music and Arts Experience in New Orleans will be a soaker with rain heavy at times well into Friday night.

Gusty thunderstorms can occur at the festival in New Orleans, as well as high school and college football games over the lower Mississippi Valley.

Because of the tropical nature of the storm, it is possible that a couple of tornadoes and waterspouts are produced along the Interstate 10 and 20 corridors into Saturday evening.

Southeastern Conference college football games in Knoxville, Tennessee; Lexington, Kentucky; and Tuscaloosa, Alabama; are likely to be wet at least for part of the time on Saturday.

Motorists venturing along portions of Interstate 10, I-20, I-30, I-40, I-55, and I-59 in the South can expect slow travel with poor visibility and excess water on the roads that could affect braking, handling, and emergency stopping.

The rain will spread farther north across the Ohio Valley and parts of the central Great Lakes during the first part of the weekend.

While rainfall is forecast to be less intense than that of the South, a general 1-3 inches with an AccuWeather StormMax™ of 4 inches can occur in parts of Indiana, southern Illinois, and western Ohio.

The rain and associated low-cloud ceiling can be substantial enough to lead to airline delays in Indianapolis, Cincinnati, St. Louis and Detroit at times.

Rainy conditions are in store for the Big Ten matchup between Wisconsin and Ohio State at Columbus, Ohio, on Saturday. Rain is also expected to move into East Lansing, Michigan, for the Penn State and Michigan State game on Saturday afternoon. Expect drenching rain for the Notre Dame and Michigan matchup at Ann Arbor, Michigan, on Saturday evening.

While thunder and lightning cannot be ruled out for these games in the Midwest, gusty thunderstorms are much less likely from the storm set up north of the Ohio River.

The back edge of the rain may not push east of the Mississippi River in many areas until later Saturday afternoon and evening.

The rain will end from west to east across the Ohio Valley and central Great Lakes region from late Saturday night to Sunday morning.

As AccuWeather meteorologists have been discussing this week, the bulk of the rain will tend to push up from the southern Appalachians on west.

However, some showers and spotty thunderstorms are forecast to slice eastward across the southern Atlantic seaboard from later Saturday night to Sunday.

For a time Sunday, the rain may be heavy over the southern Appalachians.

There is the likelihood the NASCAR race at Martinsville, Virginia, will be delayed or postponed on Sunday.