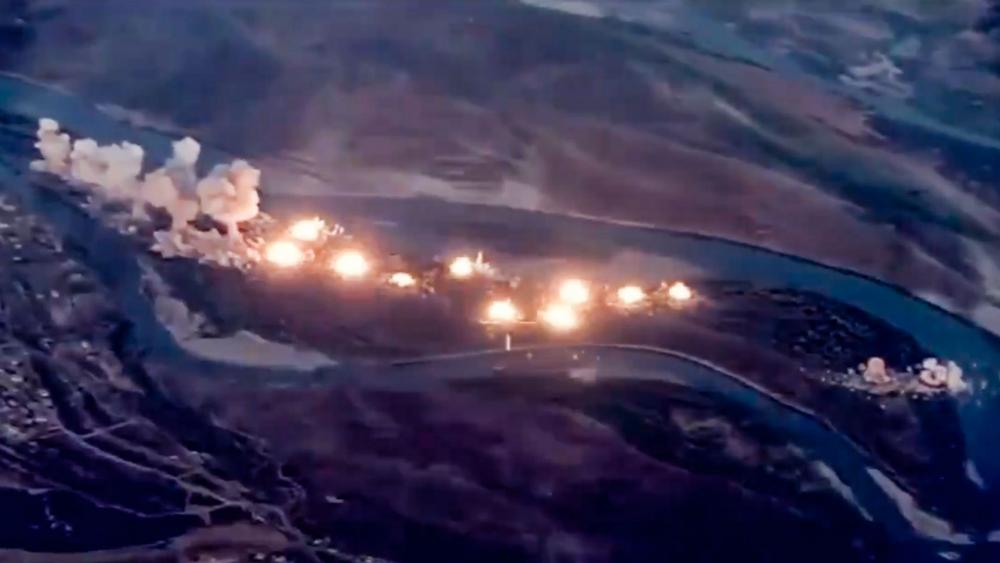 A US-led coalition of warplanes conducted an airstrike against an Islamic State stronghold in Iraq on Tuesday, dropping 40 tons of bombs on an island in the Tigris River in order to deny the terror group a safe haven, according to Operation Inherent Resolve.

OIR Spokesman Col. Myles B. Caggins III posted a video of the airstrike to Twitter with the caption: "Here's what it looks like when @USAFCENT #F15 and #F35 jets drop 36,000 Kg of bombs on a Daesh infested island."

US F-15 and F-35 aircraft dropped 80,000 pounds of munitions on Qanus Island, located in the Salah ad Din Province, north of Baghdad, to disrupt ISIS fighters' "ability to hide in the thick vegetation," the coalition said in a statement.

According to the coalition, the territory north of Baghdad is "infested" with Islamic State fighters, also known as ISIS or Daesh.

The assault is part of a larger campaign by US and Iraqi forces targeting the terror group.

"We're denying Daesh the ability to hide on Qanus Island," Maj. Gen. Eric Hill, the commander of the coalition's special operations forces, said in the statement, referring to the group by its Arabic acronym. "We're setting the conditions for our partner forces to continue bringing stability to the region."

Meanwhile, a little more than 1,400 miles to the west, a rocket exploded on the US Embassy compound in Kabul, Afghanistan, early Wednesday morning on this 18th anniversary of the 9/11 attacks on New York City and Washington, DC. No one was injured.

It was the first major attack in the Afghan capital since President Trump called off the US-Taliban peace talks over the weekend after the Taliban claimed responsibility for a bombing which claimed the lives of one American service member and several civilians.

A US-led invasion of Afghanistan in October of 2001 toppled the Taliban, which had harbored Osama bin Laden, the al-Qaeda leader and mastermind of the 9/11 terror attacks.  Bin Laden was killed by Seal Team Six on May 2, 2011, in Abbottabad, Pakistan, inside a compound where he lived with his wives and children.

According to the Brookings Institution's Bruce Riedel, the al Qaeda organization that carried out the 9/11 attacks, is today a shell of its former self.

"The global campaign against Osama bin Laden's creation has achieved notable success," Riedel wrote in an article posted to the institution's website on Sept. 10. "The ideas that inspired bin Laden and his followers have lost some, but not all, of their attractiveness. There is no place for complacency, but the threat is different."

In his address during the 9/11 commemoration at the Pentagon in Washington, President Trump warned terrorists not to return to the US.

He said America would continue to fight terrorism.

"If for any reason, they come back to our country, we will go wherever they are, and use power, the likes of which the United States has never used before," the president told the assembled audience outside of the Pentagon building, which was draped with a huge American flag.

He clarified that he was not talking about nuclear arms, but vowed retaliation.

"They will never have seen anything like what will happen to them," he warned. "No enemy on earth can match the overwhelming strength skill and might of the American armed forces."