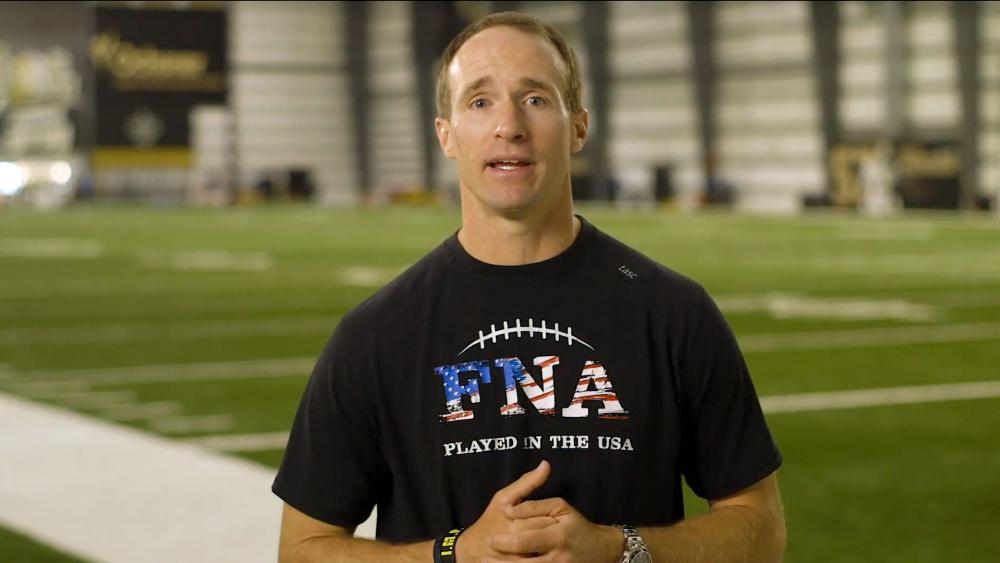 Drew Brees recently partnered with Focus on the Family to promote ‘Bring Your Bible to School Day,’ appearing in a video in which he encouraged children to participate in the event Oct. 3.

The star New Orleans Saints quarterback immediately received push-back from left-leaning media outlets, ridiculing him for aligning with Focus on the Family, which is a socially conservative organization that believes in traditional marriage.

‘Bring Your Bible to School Day’ has been taking place every year since 2014, moving students to “celebrate religious freedom and share God’s love with their friends.”

Brees’ video, which was all of 22 seconds, encouraged students to bring their bibles to school, and join the movement in which thousands of students have participated.

“Hey guys,” Brees says in the video, “one of my favorite verses in the Bible is 2 Corinthians 5:7, “For we live by faith, not by sight.”

“So I want to encourage you to live out your faith on ‘Bring your Bible to School Day’ and share God’s love with friends,” Brees adds. “You’re not alone.”

The 22-second video has since then received flack from left-leaning publications who are bashing Brees for working with an organization that promotes traditional marriage.

What Are Critics Saying?

The articles bashed Brees for his involvement, labeling Focus on the Family an anti-LGBT group.

“Focus on the Family supports and promotes the practice of ‘conversion therapy,’ which uses a combination of shaming, emotionally manipulative and traumatic stimuli, and physically painful stimuli in order to ‘cure’ LGBTQ+ people of their sexual orientation,” Jenn Bentley of Big Easy Magazine wrote.

According to Focus on the Family, they support the belief in traditional, biblical marriage, which reserves marriage to be between a husband and wife.

“Many people with same-sex attractions choose not to identify as homosexual, lesbian, gay or bisexual. Instead, their primary identification comes from their faith in Jesus Christ,” the Focus on the Family website details. “They identify as Christians, followers of Jesus and God’s children. And they choose to live according to biblical truths and values, reserving sexual expression for marriage between a man and a woman.”

“We understand that this may be a difficult struggle, requiring help and assistance from other Christians,” the website adds.

Big Easy Magazine took to Twitter following the video release, criticizing the quarterback for participating in the promotional, citing Focus on the Family’s support of “dangerous ‘conversion therapy’ practice.”

On Thursday, August 29 the anti-#LGBTQ+ religious group Focus on the Family (a strong promoter of the dangerous "conversion therapy" practice) released a video featuring none other than #Saints star quarterback, Drew Brees.https://t.co/ojAy1Hb1jV

Big Easy Magazine then tweeted again, encouraging followers to use the hashtag “SaintsDontHate” in order to raise awareness of quarterbacks involvement with the group.

We are starting a hashtag, #SaintsDontHate #IsitTrueDrew concerning @drewbrees commercial for an anti-LGBTQ group. Help us. https://t.co/RJSMngiaax

In a statement to The Christian Post, Focus on the Family President Jim Daly expressed his gratitude to Brees for promoting the event.

“We have deep respect for New Orleans Saints quarterback Drew Brees and appreciate him encouraging students to ‘live out’ [their] faith on ‘Bring Your Bible to School Day’ and share God’s love with friends,” Daly said.

Many Christian celebrities have partnered with Focus on the Family in the past to promote ‘Bring Your Bible to School Day,’ including author and speaker Sadie Robertson, singer Tauren Wells, and the rock-band Newsboys.

Colton Dixon, a singer, and ex-American Idol contestant, also appeared in a promotional video for the event this week.

“Hey this is Colton Dixon,” he said, “I just want to encourage you to not be ashamed of the gospel.”