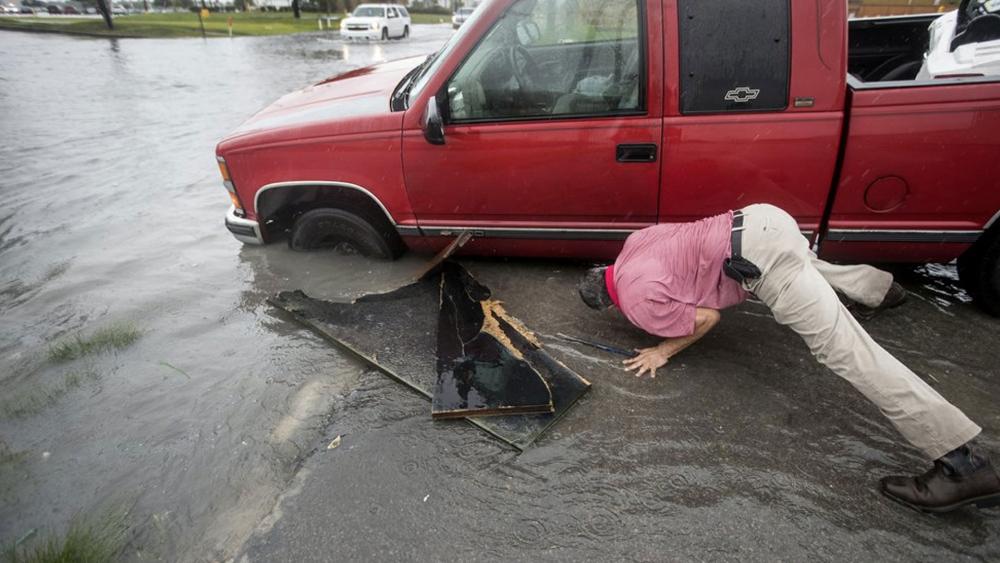 Felipe Morales works on getting his truck out of a ditch filled with high water during a rain storm stemming from rain bands spawned by Tropical Storm Imelda on Tuesday, Sept. 17, 2019, in Houston. (Brett Coomer/Houston Chronicle via AP)

The storm made landfall Tuesday near Freeport, Texas, and had produced over 22 inches of rain near the San Bernard Wildlife Reserve, while over 17 inches were reported near Sargent, Texas, according to Accuweather.com.

The storm has been downgraded to a tropical depression that is dumping vast amounts of rain in the Houston area. As much as 18 inches of rain could fall in some areas as the storm slowly moves north at a mere five miles per hour.

Houston television station KPRC-TV reports the system is producing moderate to heavy rainfall, especially in the northeast, east and southeastern counties of Texas.

Forecasters say the storm could produce up to two feet of rain in some areas.

The stormy weather only caused a few delays at Bush Intercontinental Airport in Houston. Inbound flights were delayed an average of 26 minutes due to low hanging clouds, according to flightaware.com.

Imelda is the first named storm to impact the Houston area since Hurricane Harvey, according to the National Weather Service. Harvey dumped nearly 50 inches (130 centimeters) of rain on parts of the flood-prone city on August 2017, flooding more than 150,000 homes in the Houston area and causing an estimated $125 billion in damage in Texas.

Meanwhile, meteorologists are watching two storms in the Atlantic and one in the Pacific.  Humberto is now a Category 3 hurricane with maximum sustained winds of 115 mph is moving away from the US East Coast. It's expected to brush by just north of Bermuda with high winds, rain, and waves. However, even with the hurricane's glancing blow to the islands, rounds of heavy rain, thunderstorms, and strong winds will ramp up into early Thursday, according to AccuWeather.com.

Another storm is forming off far out in the Atlantic that could develop into a hurricane later this week. Tropical Storm Jerry has become the 10th named storm of the Atlantic hurricane season. It remained far from land Wednesday. Jerry was located 960 miles to the east of the Lesser Antilles at 1:00 pm Eastern Wednesday. Forecasters believe additional strengthening is anticipated, and Jerry will likely become a hurricane by Friday. It is likely to track near or just to the north of the Virgin Islands Friday night, then north of Puerto Rico on Saturday.