Robert Jeffress to CBN News: 'If the President is Removed from Office, It's Going to Cause Lasting Wounds in Our Country' 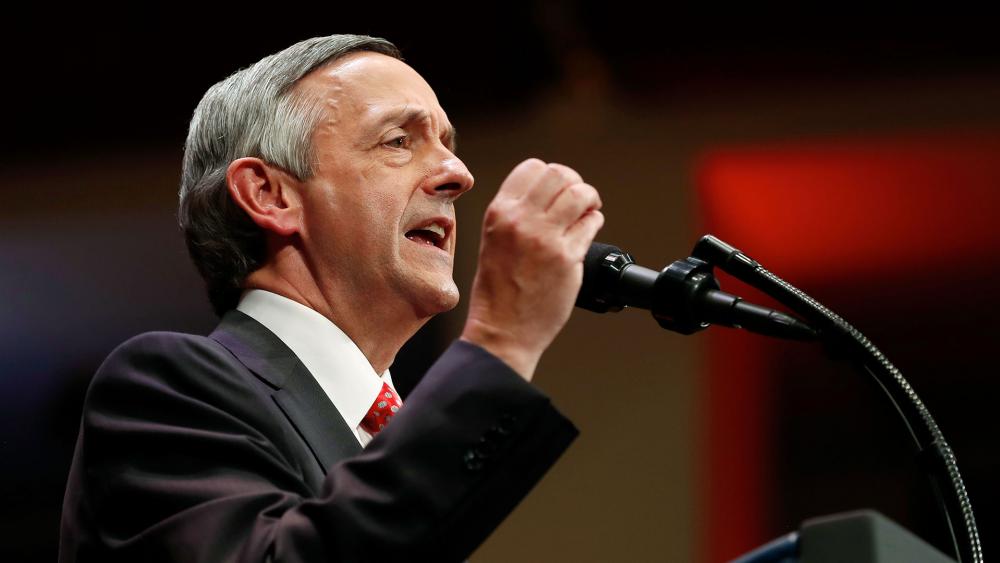 Rev. Robert Jeffress, of the First Baptist Church in Dallas, speaks as he introduces President Donald Trump during the Celebrate Freedom event on July 1, 2017 (AP photo)
6090789790001
Robert Jeffress to CBN News: 'If the President is Removed from Office, It's Going to Cause Lasting Wounds in Our Country'

Trump supporter Pastor Robert Jeffress is speaking out again to oppose the Democrat effort to impeach the president.

On Monday's CBN News' Faith Nation, the pastor of the First Baptist Church in Dallas, Texas, clarified what he earlier told Fox News during an interview that "if the Democrats are successful in removing the president from office, I'm afraid it will cause a civil-war like fracture in this nation from which this country will never heal.

The president later tweeted that remark and added Jeffress' comments that evangelicals are outraged at the way Trump has been treated.

He told the network that the president's impeachment will divide America with lasting consequences.

Jeffress is also a spiritual advisor to President Trump, an author, and a radio and television host.

Jeffress told CBN News he was very careful in the words he chose during the Fox News interview. He said he was neither predicting nor advocating an actual civil war in our country.

"But what I did say was that if the Democrats are successful for the first time in the history of removing the president from office, it will cause deep and lasting divisions in our country just like the Civil War did," he explained. "The Civil War ended 160 years ago, but our nation has not yet completely healed from that experience. I believe in the same way a duly elected president who received the votes of 63 million Americans is removed from office, it's going to cause lasting wounds in our country."

When CBN News asked Jeffress if using the comparison of the Civil War, in which more than 600,000 lives were lost during a four-year period, was a bad idea for an analogy to the impeachment inquiry, Jeffress responded, "No, it was a perfect idea."

"What I was talking about was the spirit -- the fracture of the spirit of America -- that lasted long after the war had ended. Talking about that kind of divisiveness is a good parallel situation to what we're experiencing right now," he said. "Look, our nation is already divided. I believe that this kind of action by the Democrats one year before an election is just adding fuel to the fire."

"And I believe that Nancy Pelosi is sincere about praying for America and praying for leadership in this. If she would set this aside and let voters decide one year from now about whether President Trump should remain in office," Jeffress continued. "But I believe the reason the Democrats are moving so quickly on this impeachment effort is they've tried everything else they can to get this president out of office. It hasn't worked. They're scared to death about 2020. They're becoming increasingly aware of the fact that they can't beat Donald Trump legitimately in 2020 and this is the only way they can remove him."

Jeffress said Christians should do whatever they can to bring healing, but not at the expense of truth.

"You know the truth always divides people," he noted. "And I believe that the truth is this president has been the most pro-life, pro-religious liberty, pro-Israel, pro-conservative judiciary president in history, and that's why we need to stand behind him."

Jeffress also called on Christians to take action by contacting their representatives in Congress.

"And I would say to call Americans 'Let's pray for America, but let's do more in addition to praying, let's take action,' Jeffress told CBN News. "Daniel 11:32 says 'The people who know their God will stand firm and take action.' I think Christians need to let their representatives know that they should not support impeachment. That they need to stand with this president."