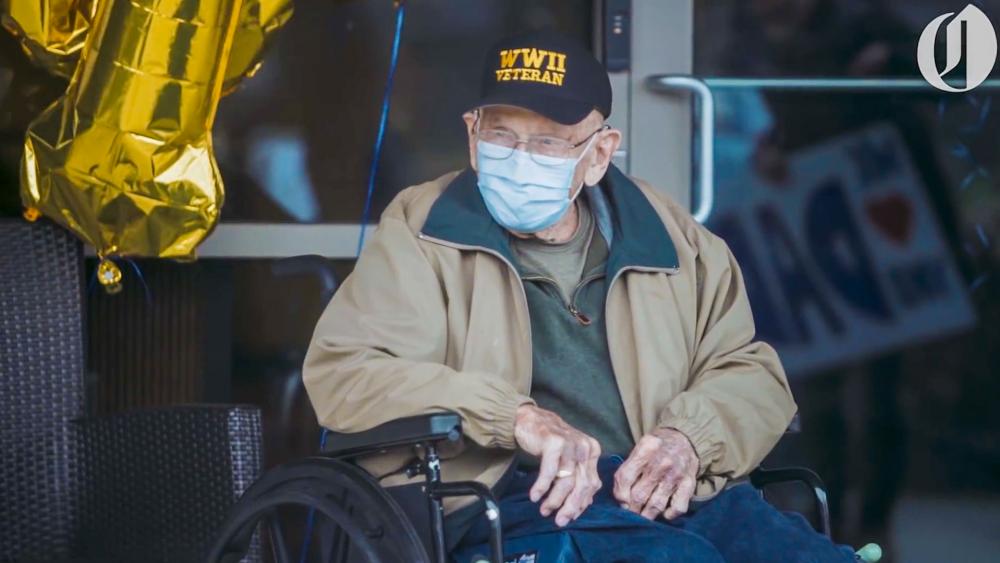 They’re called the greatest generation for a reason.

A World War II veteran from Oregon who survived the coronavirus just celebrated his 104th birthday this week.

William Lapschies has defied the odds after becoming one of the oldest people in the world to have taken on the coronavirus — and won.

“He is fully recovered. He is very perky,” a family member told Oregon Live. He was also excited:

They brought balloons and a double-layered cake. “Because he loves chocolate,” Brown said.

A caregiver had brought Lapschies out in a wheelchair to sit a proper distance away from the small semi-circle of people, but he still held forth, wearing a World War II veteran hat and dark blue jeans.

When asked about how it was he was able to survive this deadly virus, Lapschies didn’t take any of the credit. “It just went away,” he told cameras at the birthday celebration through a few laughs.

But it wasn’t always a laughing matter. Not long after he’d started feeling ill, he was struggling to survive. It looked as though he might not make it. His fever spiked and he was having trouble breathing. Doctors were talking with the family about preparing for the worst.

It seemed almost inevitable, as two people at the veterans home in which he lives have already passed away due to the virus.

Aside from it “just going away” the family attributes a few other reasons to their dad’s survival.

“He has such an upbeat attitude. He’s never down.”

The most challenging part for him has been the lockdown, as he’s normally out and about and chatting it up with people.

According to Oregon Live, Lapschies was actually born right in the midst of another pandemic — influenza. Over 50 million died worldwide during that time.

Now he’s surviving once again. Clear of coronavirus, he’s just looking forward to speaking to people in the same room, actually face to face — instead of through the window or over the phone.

For more on Lapschies background and life story, check out this wonderful profile.