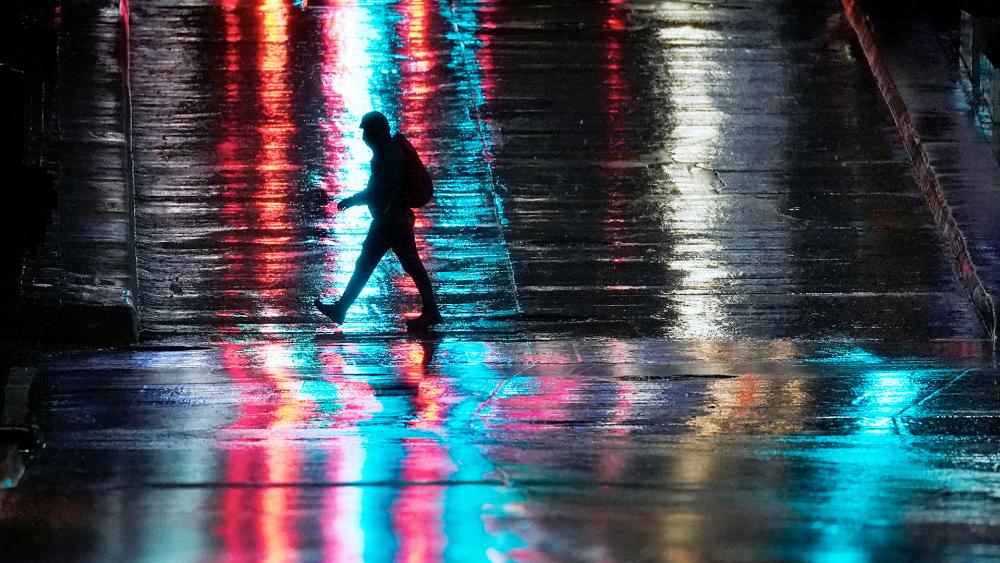 A pedestrian is silhouetted against a wet street in downtown Kansas City, Mo., Tuesday, Dec. 29, 2020, as a winter storm moved through the area, dropping first light snow and then cold rain. (AP Photo/Charlie Riedel)

AUSTIN, Texas (AP) — A winter storm moving across southwestern Texas on Wednesday could dump more than a foot (0.30 meters) of snow before moving eastward and possibly spawning tornadoes in parts of Texas, Louisiana, and Mississippi on New Year's Eve, according to weather forecasters.

Jeremy Grams, a forecaster with the National Weather Services’ Storm Prediction Center in Norman, Oklahoma, said 12 to 18 inches (0.30 meters to 0.46 meters) of snow was possible west of the Pecos River in southwest Texas, with another 3 to 5 inches (0.13 meters) predicted for western Oklahoma by Thursday.

Tornadoes are possible as the cold air moving eastward with the storm collides with moisture and warmer temperatures from the Gulf of Mexico, Grams said.

“On the warm side of the system we have the chance for tornadoes from southeast Texas across most of Louisiana and at least into southern Mississippi,” Grams said.

Grams said a wintry mix of precipitation and a threat of tornadoes is uncommon — but not unheard of — this time of year.

The storm produced what Grams said was a likely a brief tornado in Corsicana, Texas, about 50 miles (80 kilometers) south of Dallas shortly before noon Wednesday.

The Navarro County Office of Emergency Management did not immediately respond to a request for comment.

In Oklahoma, the state Department of Transportation reported wet and slushy roads on Interstate 40 in the central part of the state on Wednesday and extending along I-44 to Tulsa. The state said salt and sand were being applied to make roadways less slick.

The city of Odessa, Texas, in the Permian Basic oil patch, opened a winter weather shelter that would be available through Friday. Federal guidelines for social distancing to stop the spread of COVID-19 will be enforced at the shelter, the city said.