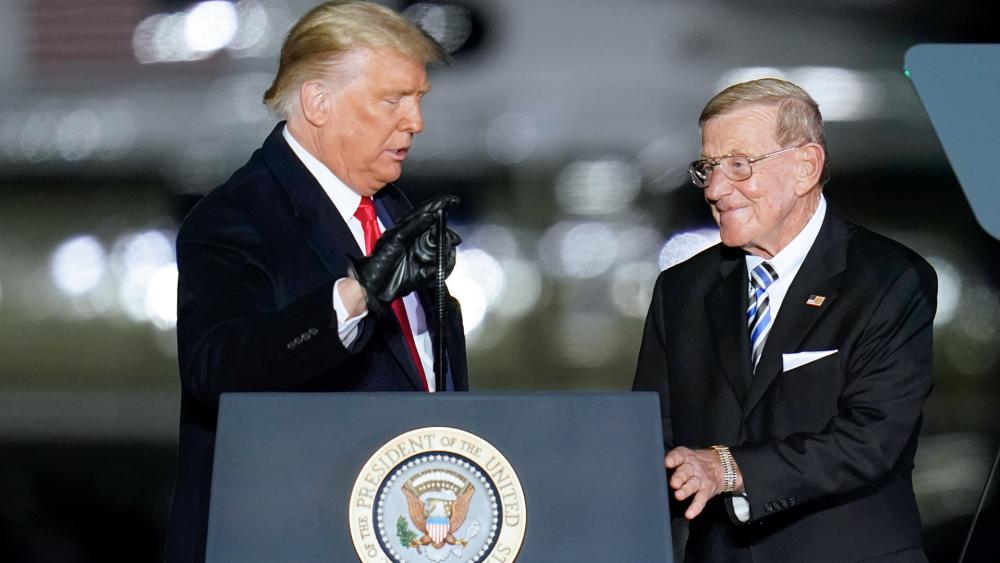 The White House has announced that President Donald Trump will award the Presidential Medal of Freedom to Louis Leo "Lou" Holtz in a ceremony on Thursday.

The Presidential Medal of Freedom is the nation's highest civilian honor, which may be awarded by the President to individuals who have made especially meritorious contributions to the security or national interests of the United States, to world peace, or to cultural or other significant public or private endeavors.

After growing up in a small town in West Virginia, Holtz attended Kent State University, becoming the first member of his family to enroll in college. At Kent State, Holtz played football, studied history, and joined the Army Reserve Officers' Training Corps. For the next seven years, he honorably served as an officer in the United States Army Reserves.

When asked about his service during an interview with the American Legion, Holtz said, "I was taught at an early age that I had an obligation to serve my country."

Upon graduating from Kent State, Holtz began his historic coaching career as a graduate assistant at the University of Iowa before landing his first head-coaching job at the College of William and Mary, leading the team to the Southern Conference title and an appearance in the Tangerine Bowl. Over the next 35 years, Holtz led successful college and professional football teams, including North Carolina State, the University of Arkansas, the New York Jets, the University of Minnesota, and the University of South Carolina, compiling an impressive overall record of 249-132-7.

Most notably, Holtz earned an outstanding 100-30-2 record in 11 seasons at the University of Notre Dame. His 1988 team earned a perfect 12-0 record and were crowned national champions. Most importantly, he inspired generations of young athletes along the way.

Since his retirement from coaching in 2004, Holtz has authored several books, contributed to ESPN and CBS as a sports analyst, and continues to give back to his community through two of his own charities, the Holtz Charitable Foundation and the Holtz's Heroes Foundation. He has received honorary doctorates from the University of Notre Dame, the University of South Carolina, Trine University, and the Franciscan University of Steubenville.

The former coach is also known for his sense of humor and has appeared as a frequent guest on several television and radio talk shows over the years. During an appearance on "The Tonight Show" in 1978, while he was the head football coach for the Arkansas Razorbacks, Holtz told Johnny Carson what he did to motivate his players.

"Basically, I feel that if you're honest with people, you'll have no problem at all communicating with them," Holtz said. "If you feel like ranting or raving or saying something that's deep down inside, that's the only way to go. You know people say like at the Orange Bowl last year, 'Boy your team's enthusiastic. They came out on that field and I knew they'd win that football game. What did you say to them?'  I just told them, "Men, Oklahoma has a great football team. The last eleven of you out of this locker room door are going to have to start the football game."

One of Holtz's funniest quotes, according to the bleacherreport.com is: "On this team, we're all united in a common goal: to keep my job."