Blood & Fire: The True Story of the 1st Kansas Colored Infantry in the Civil War 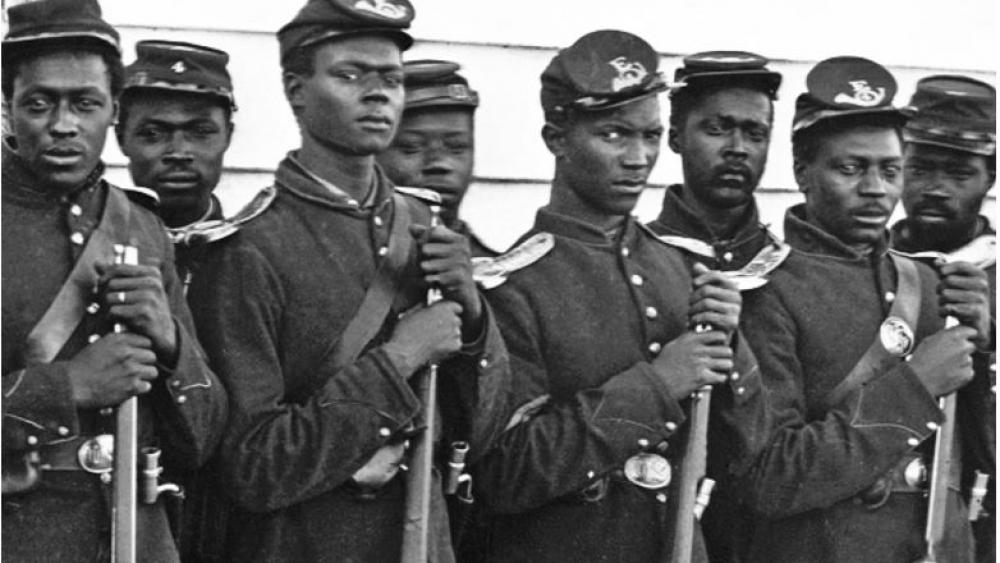 History tells us they charged through blood and fire so that the nation might live. However, at the time of their military service, they were not even recognized as citizens of the country they fought so valiantly to defend.

They were the men who comprised the 1st Kansas Colored Infantry. Their regiment compiled a proud campaign record in Arkansas, Missouri, Kansas, and the Indian Territory during the Civil War.

Contrary to popular belief, the 1st Kansas was the first black regiment raised and trained by a state during the American Civil War. They were recruited to serve in the United States Army as a fighting unit. However, Hollywood would have you believe the 54th Massachusetts Infantry was the first black unit to serve as a fighting regiment. The 54th's story was portrayed in the 1989 film "Glory."

But according to history, the honor belongs to the 1st Kansas.

Kansas Senator James H. Lane began recruiting blacks as soldiers in June of 1862. He was successful at organizing two regiments.

The Fort Scott Bulletin reported on August 16, 1862, "Colored Regiments--Gen. Lane is still going on with the work of organizing two Colored Regiments, notwithstanding the refusal of the President to accept black soldiers. Last Tuesday about fifty recruits were raised here."

The men of the regiment were never paid for their service from August through December of 1862, according to the Kansas Historical Society. The state didn't pay them and they were not in federal service.

The 1st Kansas Colored Volunteer Infantry Regiment was mustered into the United States Army on January 13, 1863, at Fort Scott, Kansas.

They were later paid for their federal service from January to June of that year. While the white troops received $13 a month, black soldiers only received $10 a month.

Colonel James M. Williams served as the regiment's commanding officer. Throughout the Civil War, white officers commanded black regiments. However, a few black soldiers would eventually earn an officer's rank. Others were promoted to positions within the regiment as non-commissioned officers.

War to the Knife

The late Edwin Bearss, chief historian emeritus of the National Park Service described the war in the Indian Territory as "war to the knife and the knife was usually driven into the hilt." This is the kind of war that the men of the 1st Kansas faced. This particular section of the Trans-Mississippi theatre of the war had one fact that was accepted by the soldiers on both sides. Prisoners would not be taken. Quarter was not asked and it was not given, even to the unfortunate wounded who could not escape.

Many history buffs do not realize the war reached into the Indian Territory, but historians have found documentation proving more than 160 Civil War battles and skirmishes were fought in the Indian Territory. The men of the 1st Kansas participated in many of these lost and forgotten battles of the war.

The 1st Kansas was the first black infantry regiment to see combat in the war. They fought in the battle of Island Mound, Mo. on October 28, 1862. Outnumbered five to one, the soldiers of the 1st Kansas were recognized for their 'desperate bravery' in the New York Times, Nov. 19, 1862.  After the war, noted guerilla Bill Truman told people in Butler that the black troops had fought "like tigers."

The 1st Kansas Colored Infantry also holds the unique distinction as the first black unit in the US Army to fight alongside white soldiers. This historic event took place at what historians call the first battle of Cabin Creek, Indian Territory. The battle was fought July 1-2, 1863 at the Cabin Creek ford of the Texas - Military Road, which ran between Fort Scott, Kansas, and Fort Gibson, Indian Territory.

Two weeks later, the regiment participated in the largest Civil War battle in the Indian Territory. The battle of Honey Springs was fought near present-day Rentiesville, Okla. on July 17, 1863. The entire regiment of the 1st Kansas was engaged in the battle. Members of the regiment fought bravely and captured a battle flag from the 29th Texas Cavalry, C.S.A. The battle would prove to be the high watermark for Confederates in the territory.

The Texans and the 1st Kansas would meet again on April 18, 1864, at Poison Springs, Arkansas.  A detachment of the 1st Kansas was helping escort a Federal wagon train of 200 wagons to the Union base at Camden, Arkansas, when a Confederate force attacked and captured the wagon train.

The soldiers of the 1st Kansas also performed other duties, including escort, engineer, and garrison duty during the war. Duty with haying parties and wagon train escorts were especially dangerous. Men often had to work with their weapons in easy reach, in case of enemy attack.

On September 16, 1864, a small detachment of the 1st Kansas was cutting and baling prairie hay for the command at Fort Gibson at Flat Rock located in the Cherokee Nation. The detachment also included men from the 2nd Kansas Cavalry.

A mixed Confederate force of almost 2,000 Texas and Indian cavalry led by Brigadier Generals Richard M. Gano and Stand Watie attacked the haying party, forcing the Union soldiers to seek shelter in a ravine on the prairie.  As the Confederate cannon pounded the Federal position, Captain Edgar A. Barker of the 2nd Kansas made a decision. He would mount his remaining white troops and try to break through the Confederate lines. The black soldiers would have to remain behind.

Of the 65 men who made the charge through the Confederate line, only 15 men succeeded in escaping. The rest were either killed or captured.

Lt. Thomas B. Sutherland was in command of the black soldiers in the ravine. He told the men to "sell their lives dear" as the soldiers began firing into the on-coming Confederate line. The men of the 1st Kansas held off three separate charges before being forced to flee. The Union forces suffered more than 100 casualties. It was reported that out of 37 black soldiers who had been with the detachment, only four remained left alive.

General Gano, a popular minister in Texas after the war, reported that "the sun witnessed our complete success and that its last lingering rays rested upon a field of blood." Survivors reported that several black soldiers were murdered after they had surrendered. Several soldiers had been found hiding in a nearby creek. They were dragged out and shot.

"The Longest Walk I Ever Took"

A few days later, the same Confederate force attacked and captured a wagon train of 300 wagons at Cabin Creek, Indian Territory. The remaining men of the 1st Kansas regiment were called upon to try to recapture the wagon train.  At the time, the regiment was camped between Fort Gibson and Fort Smith, Arkansas. Williams ordered his men to get ready to move as quickly as possible. The soldiers had to march "at the double-quick" an estimated 80 miles in less than 48-hours. Speaking to an interviewer years after the war, elderly veteran Cpl. Allen Lynch recalled that it was "the longest walk I ever took."

Col. Williams and his troops arrived at Pryor Creek, located a few miles south of Cabin Creek, and tried to lay a trap for the enemy. They attacked the Confederate advance party as it came down ahead of the wagon train. Skirmishing continued until sundown and Williams ordered his men to stay in line. The soldiers had had no rest or hot food. Now they were ordered to sleep in battle formation.

Williams was sure there would be a battle the next morning. He and his men were ready. However, when dawn came the next day, they found the Confederates were gone. They had slipped out during the night. Williams was unable to pursue the train due to the exhausted condition of his men.

On Dec. 13, 1864, a general reorganization of the black regiments was carried out and the 1st Kansas Colored Infantry became the 79th United States Colored Troops (U.S.C.T.).

According to the Kansas Historical Society, the 1st Kansas lost more men than any other Kansas regiment (white or black) during the Civil War. The regiment lost 182 men of the 463 involved - a death rate very close to 40 percent.

President Lincoln later called the 180,000 men who served in the U.S.C.T. "the sable arm" and credited them for helping turn the tide of the war.

Monuments to the Bravery of the 1st Kansas

In 1988, a monument to the First Kansas regiment was placed on the Honey Springs Battlefield by the Community Recognition Heritage Committee of the nearby city of Checotah, Okla.

Another monument to the 1st Kansas was dedicated in October of 2008 in Butler, Mo. You can read the monument's inscription here.

The Island Mound Battlefield is located approximately 7.5 miles southwest of the city of Butler and it became a Missouri State Historic Site in 2012.

Army Life in a Black Regiment

Last Raid at Cabin Creek, a documentary about the Cabin Creek raid is available as a DVD and is also currently streaming on Amazon Prime.