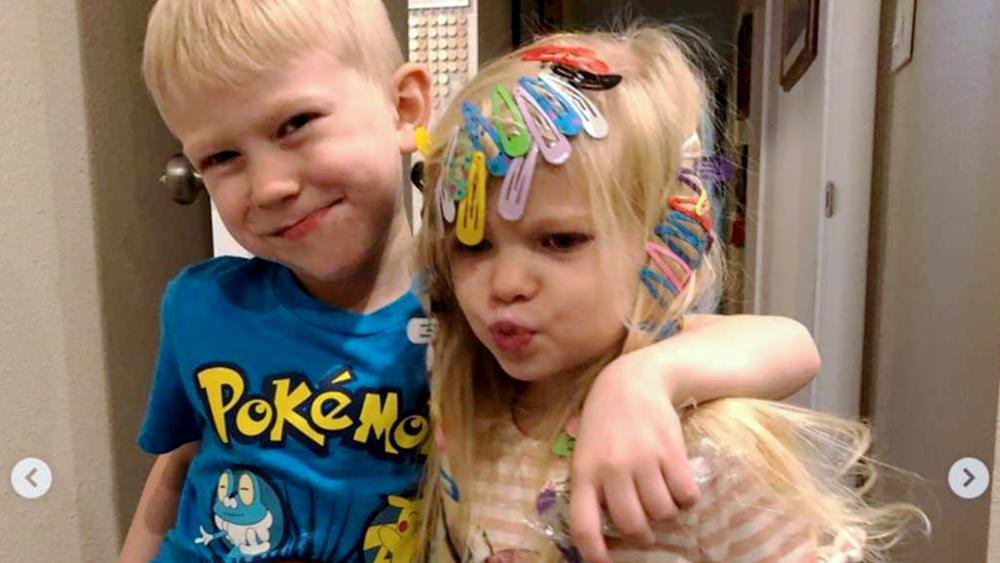 “The boy goes down so the girl goes free.”

These are the words, as Matt Chandler says in his series “A Beautiful Design” that we “know” are right. God’s design for men is made innately clear when we see, for example, actions such as the three heroes who died protecting their girlfriends at the Aurora movie theater shooting,.

Six-year-old Bridger saved his little sister’s life after he stood in between her and a charging dog, thus putting himself on the receiving end of vicious blows that resulted in some pretty gruesome injuries.

When asked why he acted the way he did, he said, “If someone was going to die, I thought it should be me.”

Bridger’s proud aunt Nicole has been posting about the ordeal on Instagram.

“His wounds are looking so much better! He’s in great spirits, and his awesome personality is intact,” she wrote in a recent update. “He can’t smile too widely yet, but he was grinning as I read some of your comments to him. I’d also like to mention here that the dog’s owners are really great people who have been nothing but kind to Bridger and his family. We feel no resentment toward them at all, and—if anything—there’s only been an increase of love between our families as a result of this incident.”

He’s had 90 stitches and is “finally resting at home” according to Nicole. She also tagged a few of Bridger’s favorite action heroes in hopes they’d be able to give the young hero a shout out.

“We love our brave boy and want all the other superheroes to know about this latest hero who joined their ranks. @tomholland2013@chrishemsworth@robertdowneyjr@markruffalo@prattprattpratt@twhiddleston@chadwickboseman@vindiesel@chrisevans” she wrote.

My nephew is a hero who saved his little sister from an attacking dog. He, himself, took on the attack so that the dog wouldn’t get his sister. He later said, “If someone was going to die, I thought it should be me.” He got home from the hospital last night. I know it’s a long shot, but I’m reaching out to the Avengers and other heroes so that they can learn about this latest addition to their ranks. Please, check your DM’s for my sweet nephew’s story. @tomholland2013 @chrishemsworth @robertdowneyjr @markruffalo @prattprattpratt @twhiddleston @chadwickboseman @vindiesel @chrisevans @vancityreynolds @thehughjackman Edit: I never expected my sweet nephew’s story to reach so many. Please, follow my other post (I only have two so far) for the latest info regarding my sweet nephew and his family.

Hey, all. Please, share my nephew’s story so that it gets as much exposure as it can. We know that our little hero would love some words of encouragement from his favorite heroes. On July 9th, my six year old nephew Bridger saved his little sister’s life by standing between her and a charging dog. After getting bit several times on the face and head, he grabbed his sister’s hand and ran with her to keep her safe. He later said, “If someone had to die, I thought it should be me.” After receiving 90 stitches (give or take) from a skilled plastic surgeon, he’s finally resting at home. We love our brave boy and want all the other superheroes to know about this latest hero who joined their ranks. @tomholland2013 @chrishemsworth @robertdowneyjr @markruffalo @prattprattpratt @twhiddleston @chadwickboseman @vindiesel @chrisevans EDIT: I just finished visiting with Bridger at his home. His wounds are looking so much better! He’s in great spirits, and his awesome personality is intact. He can’t smile too widely yet, but he was grinning as I read some of your comments to him. I’d also like to mention here that the dog’s owners are really great people who have been nothing but kind to Bridger and his family. We feel no resentment toward them at all, and—if anything—there’s only been an increase of love between our families as a result of this incident. EDIT 2: Once again we’re blown away by the amazing comments and messages that Bridger’s receiving. I’ve had lots of inquiries about a GoFundMe. Bridger’s family has asked that any one wishing to help out financially can, instead, donate to @mission_22 or @wwp. Bridger is also a huge fan of Science, especially Geology. So I’m going to start a post where people can share with him pictures of cool rocks that they see. EDIT 3: Once again, everyone’s kindness has meant so much to us. I’m trying to get to all of the messages that I can, but it may take some time. For those who have inquired about sending Bridger some rocks, here’s the address to use: Bridger Walker P.O. Box 22141 Cheyenne, WY 82003 #BridgerStrong

As mentioned at the top of the article, Matt Chandler gave a sermon about God’s design for men and women. He quoted Dr. Randy Stinson while talking about them, and he said this:

If you hear a bump in the night, men, do you go, “Baby, go check that out. I’m frightened”? Do you do that? “Hey, baby, the dog is going nuts. Get down there”? You don’t! Are you serious? Surely you didn’t. If you have and you’re feeling shame, you should feel that shame. I’m not taking that off of you. No, we go down. We check it out. We’re the ones who go check out the bump in the night because we are physically stronger.

In fact, even unbelievers know this to be true. Let me give you the example of how this played itself out. On July 20, 2012, in a Century movie theater in Aurora, Colorado, three young men all under the age of 30 took their girlfriends (not their wives, not their mothers) to a midnight showing of The Dark Knight Rises. Twenty-something minutes into the movie, a man who had lost his mind popped off tear gas canisters in the theater, lifted up a semi-automatic rifle, and began to randomly shoot in the theater.

In the same year, in fact six months earlier, on an Italian cruise ship, the Costa Concordia, January 13, it capsized off the coast of Tuscany. Thirty-two people were killed. In fact, if you Googled it and saw the image, you’d be like, “Oh yeah. I remember that.” Now there were widespread reports that when that ship capsized, men were shoving women and children down to get to the life rafts first. This was universally condemned.

Why does it matter? Do you want me to tell you why it matters? Because we all know this sentence in our gut: the boy goes down, and the girl goes free. A good friend of mine, Randy Stinson… one of the vice presidents of Southern Baptist Theological Seminary. He has a lot of children. He has adopted children. I mean, he is like a kid away from a TLC show. He has taught all his little boys concerning his daughters and women in general, “The boy goes down. The girl goes free. Say it back to me, sons. The boy goes down so that the girl can go free.” He tells this story of being in his office at his house working, and he saw his son going down the hill in his little red wagon thing. He was like, “Okay, that’s going to end badly.”

He got up and went. He was opening up the blinds. He saw his son. It’s like the wagon is like… He was like, “My son is going to die here.” As he was watching his son, waiting for impact so he can go save his life, he saw this little girl on her tricycle starting to come out. He said the impact was imminent when he saw his son rock it and throw the wagon down and then begin to dump head-over-foot. Randy and his wife ran out. They got their son. They brought him in. They were trying to get the blood off of him to see if they needed to go to the hospital.

Because we’ve been hardwired as men to keep it, to protect it. In some sense, it’s physical, and then in another sense, it’s very much spiritual. As we get through this series, we’re going to get into the narrative. What happens is the Serpent deceives Eve with Adam standing right there. Eve takes the apple, believing the lie of the Serpent, takes a bite of the fruit, and then hands it to her passive idiot husband, who also takes a bite.

Do you know who God blames for sin introducing itself into the cosmos? Adam. Because he had the role of spiritual headship, of covering and protection. He didn’t step up. He did the spiritual equivalency of, “Go check it out, baby.” He did the spiritual equivalency of, “You head to the front line and get dismembered, raped, and slaughtered, and I’ll be back here.” The boy goes down, and the girl goes free. That’s how God designed it to work in the home, in the church, and in culture by and large.

You can check out the whole sermon HERE.

Praise God for raising up heroes like Bridger – and prayers for the young man’s speedy recovery!