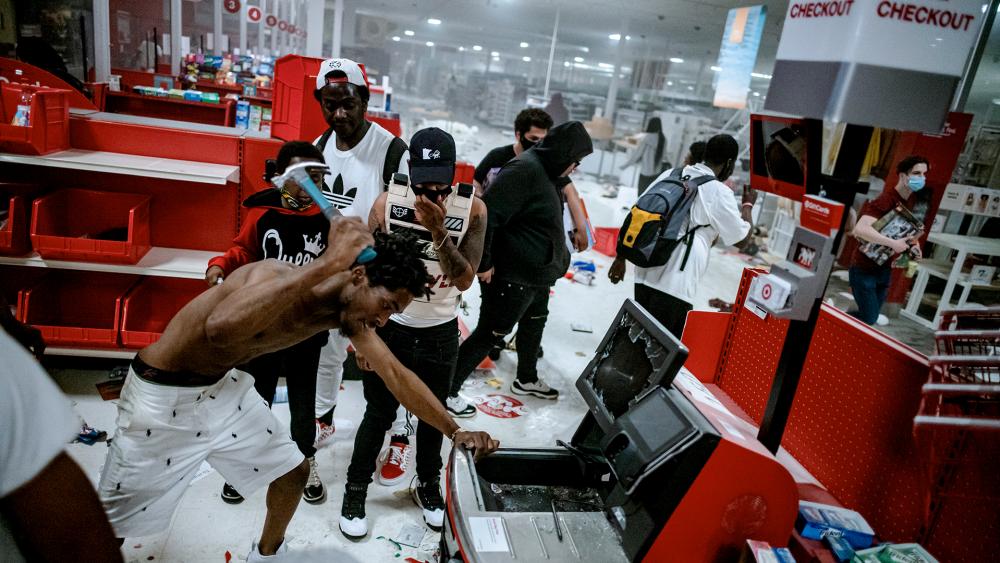 In this Wednesday, May 27, 2020 photo, a looter uses a claw hammer as he tries to break in to a cash register at a Target store in Minneapolis. (Richard Tsong-Taatarii/Star Tribune via AP)

President Donald Trump has denied a request from the Democratic governor of Minnesota for money to rebuild parts of Minneapolis ravaged by rioters following the killing of George Floyd.

Gov. Tim Walz (D) asked the president to declare Minnesota a “major disaster” zone in a request to the Federal Emergency Management Agency, which would send the state’s progressive government over $500 million after more than 1,500 buildings were damaged by looting and rioting in the wake of Floyd’s death, the Star Tribune reported.

One Minnesota Republican urged Trump to reject the request.

“If the federal government is expected to assist in the clean-up of these unfortunate weeks, it has an obligation to every American — prior to the release of funding — to fully understand the events which allowed for this level of destruction to occur and ensure it never happens again,” Rep. Tom Emmer (R-Minn.) wrote in a letter to the Trump administration.

Great news! @realDonaldTrump has DENIED Minnesota's disaster request to repair half a billion dollars in damage from the riots. Governors and Mayors who ordered police to stand down and watch their cities burn shouldn't get a penny in taxpayer aid! https://t.co/8WAgm7AFa7

Minneapolis Mayor Jacob Frey (D) ordered the police to stand down as the city literally went up in flames. Even as rioters torched the Minneapolis Police Department’s 3rd Precinct, law enforcement officers abandoned it and let it burn.

The New York Times described one night of mayhem this way:

As the night wore on, dozens of buildings burst into flames, without a fire crew in sight. A six-story apartment building that was still under construction collapsed into a ball of fire. A high-tech factory was set ablaze. Residents called 911 desperate for help, but dispatchers were overwhelmed.

Over three nights, a five-mile stretch of Minneapolis sustained extraordinary damage. The police precinct house itself was set on fire, after the mayor age orders to evacuate the building. A month later the city is still struggling to understand what happened and why: Not since the 1992 unrest in Los Angeles has an American city suffered such destructive riots.

In addition, progressive politicians in Minneapolis have repeatedly ridiculed law enforcement offices and have vowed to dismantle the city’s police department — even as violent crime continues to surge.

Asked by CNN what Minneapolis residents should do if their homes are broken into and there are no police officers to call, City Council President Lisa Bender said, “Yes, I mean, I hear that loud and clear from a lot of my neighbors, and I know, and myself, too, and I know that that comes from a place of privilege because, for those of us for whom the system is working, I think we need to step back and imagine what it would feel like to already live in that reality, where calling the police may mean more harm is done.”

CAMEROTA: "What if in the middle of the night my home is broken into. Who do I call?"

BENDER: "Yes, I hear that loud and clear from a lot of my neighbors. And I know — and myself, too, and I know that that comes from a place of privilege." pic.twitter.com/WhubQ9yJIf

A group of black peace activists held an “urgent news conference” last week, speaking out against city policymakers’ plan to do away with the police department.

“It is time for us to stand up in this city,” said Lisa Clemons, a former police officer and activist with “A Mother’s Love.” She went on to tell reporters, “It is time to tell the city council that utopia is a bunch of B.S. We are not in Mayberry R.D.F. We are in the Wild, Wild West, and it is time for some answers.”