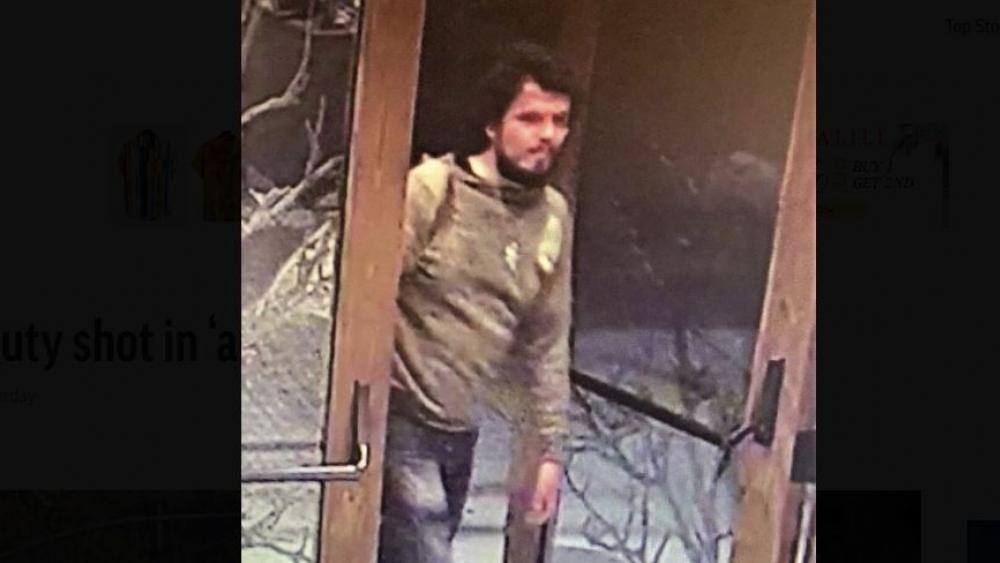 LOS ANGELES (AP) - A gunman who ambushed officers outside a California Central Coast police station, shooting one in the head, also may have killed a homeless man found slain execution-style on nearby railroad tracks, authorities said.

A hunt was underway Thursday for a suspect identified as Mason James Lira, 26, a transient from the Monterey area of the Central Coast.

He's believed to be the man with dark curly hair and beard who opened fire at the downtown Paso Robles Police Department before dawn Wednesday and then eluded an hours-long search.

A dispatcher monitoring the department’s security cameras spotted the man.

“We feel that this was an ambush, that he planned it, that he intended for officers to come out of the Police Department and to assault them,” Sheriff Ian Parkinson said.

“The suspect began firing at police cars as they entered the downtown area,” Parkinson said.

Two deputies who arrived to search the area heard gunshots but didn’t see the attacker until they were out of their patrol car and taking fire, the sheriff said.

One deputy was shot in the head. His partner returned fire and dragged the deputy to cover behind a police car, the sheriff said.

The deputy, whose name wasn’t released, had been on the force for two years. He had a bullet lodged in his head and was hospitalized in serious but stable condition, Parkinson said.

The downtown area was searched for hours but the attacker wasn’t located and is believed to have left the area, authorities said.

Surveillance camera photos from a downtown hotel and an ale house were released of the suspect, a young man in a long-sleeved shirt.

Some two dozen detectives were investigating with help from the FBI.

Shots were fired at five downtown locations, and some buildings were hit, including a Department of Motor Vehicles office, Parkinson said. However, they were not targeted, he added.

During the search, business owners contacted Paso Robles police to report seeing a body near the train station. Officers found the body of a 58-year-old man on the tracks.

He appeared to be a transient who was camping out overnight and he was shot in the back of the head at close range, Paso Robles Police Chief Ty Lewis said.

“We do believe it’s linked to our ambush, active shooter situation,” the chief said.

However, it wasn’t immediately clear whether he was shot before or after the attack on the police station.

The police chief urged family or friends to convince the gunman to surrender.

The attack on the police station appeared unprovoked and investigators weren’t sure of a motive, authorities said.

Paso Robles is an unlikely spot for such violence. The bustling community 175 miles (282 kilometers) northwest of Los Angeles is a tourist destination and centerpiece of the wine industry on California’s Central Coast.

The violence came just five days after another unlikely location, the community of Ben Lomond in Santa Cruz County farther north on the California coast, was the scene of an ambush on police.

Santa Cruz sheriff’s Sgt. Damon Gutzwiller, 38, was killed and another deputy injured Saturday in an attack allegedly carried out by an Air Force sergeant armed with homemade bombs, an AR-15 rifle and other weapons. Santa Cruz County Sheriff Jim Hart said the suspect, Steven Carrillo, was intent on killing officers.

Carrillo, 32, was arrested and the FBI is investigating whether he has links to the killing of a federal security officer who was shot outside the U.S. courthouse in Oakland during a protest against police brutality on May 29.

The FBI also is assisting in the shooting of the deputy in San Luis Obispo County, although the sheriff said there’s no clear link between the other shootings, although over time the investigation could lead there.

Parkinson said there was no local event or imminent arrest that might have prompted the violence. He also said investigators didn’t know if the attack was connected to anger swelling nationwide at police over the killing of George Floyd by Minneapolis officers. He called Floyd’s death unjust and horrific.

“You see what’s happening nationally, you see the riots, you see the looting, you see the acts of violence occurring ... there’s naturally fear as a result of that,” he said. “So trying to calm the community has been our goal.”