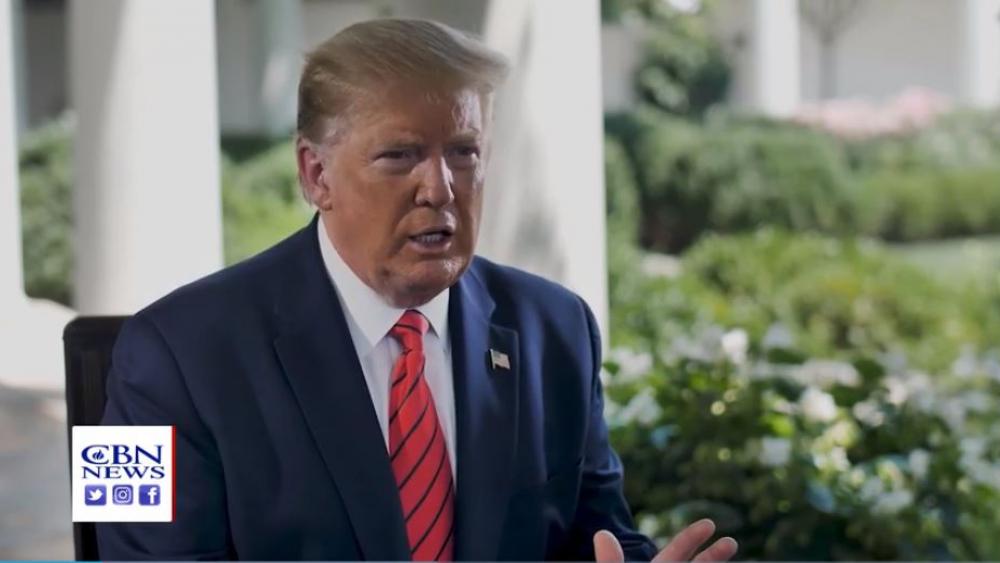 David Brody: Let me ask you. I don't want to talk about the John Bolton book, but I bet he did say something in that book about the media. He said something about you saying journalists should be jailed and then executed. I mean, you want to respond to that?

President Trump: He made it up. Look, he's admitted that he will lie. He's admitted that there was a report that I saw where he will admit that he will lie in order to get the job done. I gave John Bolton and he lied. I gave you John Bolton, the great opportunity and by the way, the things many of the things he said there are many other people in the room. Because it's not like I'm alone with one person, right? I have a lot of big delegation with me and they've got a big delegation. And Steve Mnuchin came out and Mike Pompeo came out and Mick Mulvaney came out. Many people, they all came out, and they said, it's a lie. He's a liar. I fired him. I got him out. He was no good only want to do is bomb people. Now, I don't mind having an opposing point of view. And frankly, I think I used him very well, because when people saw him, they know he was sort of crazy. And maybe it helped me negotiate good deals, frankly. But he was terrible. He had no personality. He had no warmth. What I don't think I've ever seen this guy smile If you haven't seen him smile. He said, John, do you have a smile? And he didn't even know how to answer the question. No, John. John was washed up. And I took him and I gave him something he couldn't get senate confirmed because they hated him. They hated him and they thought he was a whack job. I asked him, Do me a favor. Tell me. Are you still happy with the decision? You push it so hard to go into Iraq? He said, Yes. I said you're happy we spent almost eight trillion dollars in the Middle East because of that decision, you think was a good decision? Yes. I said this guy's bad. and then of course, the Libyan model. You remember the Libyan model, one of the stupidest things ever said on television was said by John Bolton, so he was pretty much gone early on, but we kept him around. And he went out and wrote a book. And by the way, the judge made a tremendous statement. I mean, usually, the judge said about the release of classified material. I think John Bolton's got a big problem. Plus, he's not going to be able to keep his money. I don't think there's a chance that he's going to be able to keep this money. So we'll see what happens.

Watch CBN News Chief Political Analyst David Brody's exclusive interview with President Trump Tuesday morning on The 700 Club. Check local listings. Then at 11:00 am, come back to CBNNews.com or the CBN News YouTube Channel to watch the entire interview.