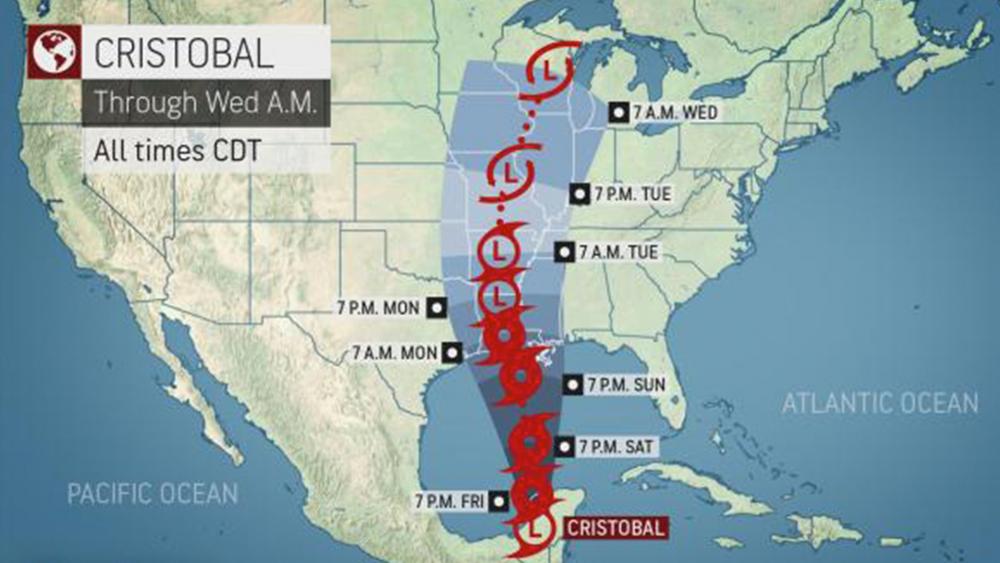 Cristobal was on the move again Friday, a day after the storm weakened to a depression and nearly crawled to a halt over southern Mexico. The storm was unleashing flooding rainfall on Friday morning as it headed north-northeast at 7 mph and with 35-mph sustained winds, according to the National Hurricane Center. AccuWeather forecasters expect the system to strengthen again over the warm waters of the Gulf of Mexico before striking the upper Gulf Coast of the United States late Sunday to early Monday.

The government in Mexico discontinued all tropical storm warnings that were in effect from Campeche to Coatzacoalcos, Mexico, as of 10 a.m. CDT Thursday. The dangers of life-threatening flooding and mudslides will persist into Friday. Cristobal, which stalled over southeastern Mexico as predicted, dumped 14 inches of rain in some areas as of early Thursday.

The storm will continue to move northward on Friday, eventually emerging into the Gulf of Mexico.

Some shift in the track of the storm is possible, especially after it begins to move northward from Mexico this weekend due to how an area of high pressure, currently over the southern U.S., interacts with it.

"There will be no impact on the United States at least through the end of the workweek,” AccuWeather Chief On-Air Meteorologist Bernie Rayno said. "It is this weekend that Cristobal will be approaching the Gulf Coast anywhere from the upper Texas coast to as far east as the Mississippi coast for landfall."

Since the system is sprawling in size, and it's likely to increase in size over the Gulf of Mexico, impacts from this feature are expected to precede the arrival of the storm's center by 36 to 48 hours, meaning places along the U.S. Gulf Coast could begin experiencing Cristobal's outer bands well before the storm makes landfall.

"As expected, interaction with the landmass of southeastern Mexico caused Cristobal to weaken and spend time as a tropical depression from Wednesday to Friday," Kottlowski said. "Now we are watching for the storm to regain strength as it departs the Yucatan Peninsula of Mexico and moves back over warm water Friday night into Saturday."

Storm Could Make US Landfall as Strong Tropical Storm

Landfall as a strong tropical storm in the U.S. is most likely, but there is a chance that Cristobal reaches hurricane strength as it spends time over warm Gulf waters. Sea surface temperatures were in the 80s across much of the region as of Thursday, and according to Rayno, 80 degrees Fahrenheit is a critical temperature threshold for sustaining tropical systems.

How quickly Cristobal gains strength while moving northward off Mexico's Yucatan Peninsula late Friday to Saturday may hold the key to intensity, later on, meteorologists say.

If the storm fails to ramp up right away, then it may be a sign that the system may not regain strength. But, if the storm rapidly organizes as it moves back over the warm water, then the risk of it becoming a hurricane prior to landfall will increase substantially.

"We are getting some information that suggests wind shear may increase enough to allow dry air to wrap into the system over the weekend while over the Gulf of Mexico, and that could limit strengthening as well," Kottlowski said.

"We do not expect the slow movement of Barry from last year and the 24 inches of rain it delivered along the central Gulf Coast," Kottlowski said, referring to a short-lived hurricane that struck the Gulf Coast in July of 2019 and triggered widespread flooding.

"But even rainfall of 6-12 inches with an AccuWeather Local StormMax™ of 16 inches can be enough to cause some serious localized flooding problems along and east of the storm track," he added.

Flooding could occur even in areas that have experienced a rainfall deficit for the year so far. Portions of the central Gulf Coast are currently experiencing moderate to severe drought. Mobile, Alabama, has picked up 20.52 inches of rainfall since the start of 2020, about 7 inches below normal for the year to date or 74% of normal.

As the storm strengthens over the weekend, winds will increase throughout the Gulf of Mexico, but especially in shoreline areas from Louisiana eastward to the Florida Panhandle and along the west coast of the Florida Peninsula. A storm surge up to 6 feet above ground is possible near and just east of where the storm makes landfall.

"The increasing winds will lead to an increase in coastal flooding with a building storm surge, well ahead of the center beginning on Saturday," Kottlowski said.

AccuWeather is expecting a storm surge of 3-6 feet near and just east of where the center makes landfall along the upper Gulf Coast of the U.S.

"Evacuation orders are generally issued by government officials where the storm surge is forecast to reach 3 feet or higher," Kottlowski said. "So we expect some evacuations with this but it is a matter of where the National Hurricane Center forecasts that level of storm surge."

Because of the sprawled out nature of Cristobal, impacts will begin well ahead of the storm center. Rip currents will increase in strength and number along much of the U.S. Gulf Coast this weekend.

"Tropical-storm-force winds could extend outward to 200 miles from the center of the storm, especially on the eastern and northern sides and be reached by Sunday morning from coastal areas of the western part of the Florida Panhandle through the Louisiana coast," Kottlowski said.

"Residents along the upper and eastern Gulf coast will need to take action to prepare for the arrival of tropical-storm-force winds and building storm surge from Cristobal by Sunday morning," he added.

Sustained winds of 50-60 mph are forecast with gusts to 70 mph near and just east of where the center makes landfall. However, large spiral bands from the storm can bring strong gusts well away from the center.

The combination of heavy rain and winds that cause a storm surge might be enough to lead to some flooding in New Orleans. The city's levee system has been significantly upgraded since the Hurricane Katrina disaster in 2005, but stormwater pumps failed to handle a torrential downpour that brought 7 inches of rain in six hours in July 2019 and led to flooding in the city. Depending on exactly where the bands of heavy rain set up and linger, street flooding in the city is anticipated from Cristobal.

All communities from the upper Texas coast to the west coast of the Florida Panhandle are urged to closely monitor the progress of Cristobal.

"The worst of the conditions from Cristobal will end up being on one side of the storm versus the other,” Rayno said, adding that most of the showers and thunderstorms will be skewed toward the eastern side of the system.

As Cristobal approaches the upper Gulf coast, areas near and to the east of the storm center may be at risk for tornadoes and waterspouts to develop. Cristobal's large size and dry air sweeping up from the southwest could be enough to cause rotating thunderstorms to ignite, with the potential for tornadoes to touch down, from late Sunday through Monday. The severe thunderstorms would tend to develop in the spiral bands that extend outward from the storm.

For ultimate safety, small craft along the Gulf coast should remain in port this weekend due to the likelihood of strengthening of a large tropical storm. Petroleum interests may need to take precautionary measures. Some of the rigs in the region have already been shut down due to the ongoing glut of fuel.

In contrast, due in part to the lop-sided nature of the storm and the further flow of dry air into the storm this weekend, rainfall will trail off dramatically west of the storm track. Impact on areas near and southwest of Houston may be limited to breezy conditions with surging temperatures and rip currents on the beaches.

Beyond this weekend, Cristobal is forecast to move inland over the lower Mississippi Valley next week. An area of heavy rain with localized flooding is possible as the storm moves northward and evolves into a tropical rainstorm.

The main rice-growing area in the U.S. is in the Mississippi Delta crop belt. About 65% of the total U.S. rice crop is grown there, with 40% of the U.S. crop grown in Arkansas alone. Therefore, any flooding could also have an effect on the rice crop, especially since the crop has just emerged.

AccuWeather meteorologists will be monitoring another area of showers and thunderstorms in the Atlantic for tropical development. Waters around Bermuda could help give birth to a system sometime next week.

AccuWeather is forecasting a busy tropical season in the Atlantic with 14 to 20 tropical storms, including seven to 11 which could strengthen further into hurricanes. Four to six major hurricanes -- Category 3 or higher -- are predicted. However, the 2020 season has already set a record. Cristobal became the earliest third named tropical storm on record in the basin when it was named on June 2. The storm beat the previous record which stood from 2016 when Colin formed on June 5.