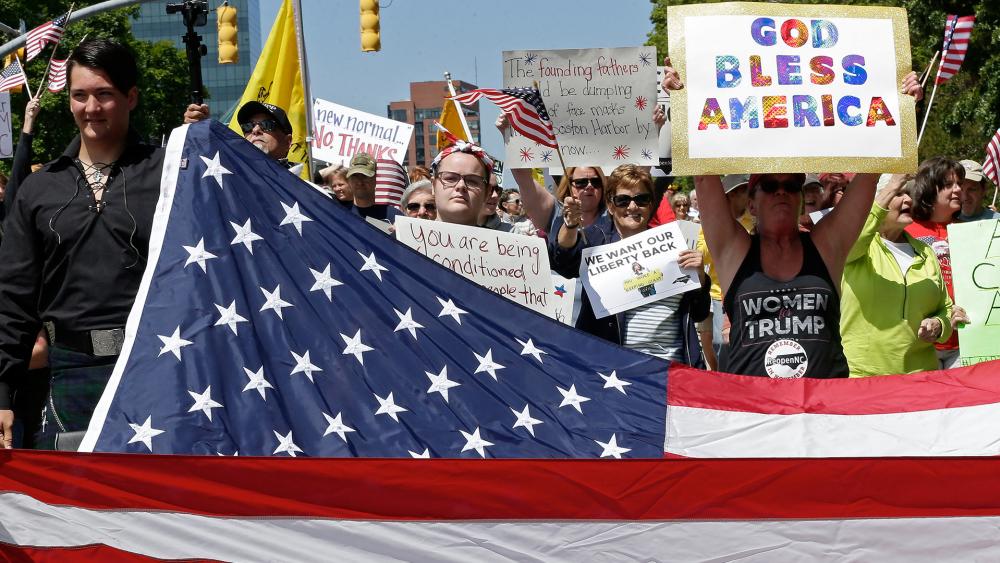 Although this image is not from Thursday's Return America rally, this photo was taken at a ReOpen NC protest in downtown Raleigh, N.C., by an AP photographer on Tuesday. (AP Photo/Gerry Broome)

Members of churches across the state of North Carolina rallied in downtown Raleigh on Thursday to protest against Gov. Roy Cooper's stay-at-home order and demand the right to hold in-person services inside their church buildings.

WRAL-TV reports the group known as Return America whose members include pastors and Christian educators, announced at the rally that they have filed a federal lawsuit against Cooper for not allowing people to assemble to worship inside their church buildings.

The lawsuit, filed by Berean Baptist Church and its founding pastor Dr. Ronnie Baity, located in Winston-Salem, and People's Baptist Church located in Greenville, is an attempt to block enforcement of Cooper's orders regarding religious services. Baity is identified in the lawsuit as the president of Return America.

"Return America, Inc., is a nonprofit organization that is comprised of a network of churches and individuals whose purpose it is to educate, motivate, and mobilize citizens in a united effort in promoting Judeo-Christian values; to educate and influence government in the principles upon which North Carolina and the USA were founded: the sanctity of life and protection of the unborn, the sanctity of marriage and family, Biblical morality, religious liberty, and the security of America," the lawsuit states.

"We have the ability to open our churches safely, with higher standards than they are asking us to do," Dr. David Gibbs, Jr., the CLA's founder, and a Baptist minister told WRAL.

Under the first part of the three-phase plan to resume business in the Tarheel State, there's no limit to the number of people who can attend an outdoor wedding or worship service.  However, an indoor gathering is still limited to 10 people or fewer, according to the television station.

During the second phase of the governor's plan, churches would be allowed to hold indoor assemblies, but only at a limited capacity.

"We are asking the court to give instruction to the governor to immediately open these churches," Gibbs told the station.