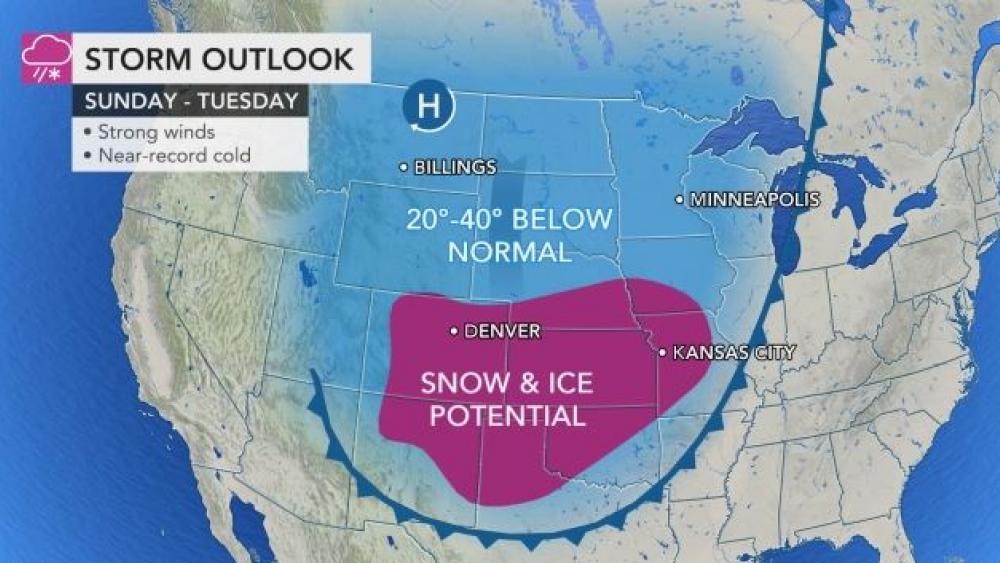 Waves of winterlike weather have already delivered helpings of record-setting, early-season snow and intrusions of cold air over the north-central United States. And forecasters warn that more wintry weather is in the pipelines for parts of the western and central U.S. in the coming weeks. A blast of frigid air may not only shatter records but also deliver cold more on par with the middle of winter to parts of the Rockies and Plains, laying the groundwork for an unusual snowfall far to the south for late October.

An Arctic outbreak even more extreme than one felt in early September is expected to race southeastward from the northern Rockies Friday night to the southern Plains on Monday and could deliver temperature departures from an average of 30-40 degrees Fahrenheit.

The air is forecast to be so cold at its peak as to bring nighttime low temperatures to within a few degrees of zero in parts of Idaho and much of Montana and Wyoming, as well as the western parts of the Dakotas and northern Colorado.

For example, "in Billings, Montana, the temperature is forecast to shatter the current record of 18 set in 1997 Saturday night by at least 14 degrees and to blow away the record low of 22 set in 2002 on Sunday night by 22 degrees," according to AccuWeather Meteorologist Reneé Duff.

The normal low temperature in Billings during late October is in the middle 30s, but even in the middle of January, the average low is 18 degrees.

In Missoula, Montana, the low could plummet to a bitter 3 degrees on Saturday night, nearing the all-time record low for October of zero degrees set back in 1971.

Record-challenging cold will be felt as far south as New Mexico, Kansas, Oklahoma, and Texas by early next week, where temperatures are forecast to dip into the teens and 20s at night.

A snowfall -- ranging from flurries to a heavy accumulation -- will accompany the blast of cold air as it rolls southward along the Rockies and High Plains.

Heavy snow, on the order of a foot or so, is most likely over the north- and east-facing ridges and peaks from Washington on Friday to northern Idaho and Montana on Saturday, Colorado on Sunday, and northern New Mexico on Monday as the cold air pours in.

"The heaviest snow with 12-18 inches and an AccuWeather Local StormMax™ of 30 inches is foreseen in the northeast-facing mountains in Montana," according to AccuWeather Senior Meteorologist Brett Anderson.

Snow or some sort of wintry precipitation will extend well east of the mountains and across part of the Plains as well.

A swath of 6- to 12-inch snow is likely to hit parts of the Dakotas and western Minnesota from Saturday to Sunday. Snow from the storm this weekend could push the October total in Minneapolis past the record mark. The October snowfall record is 8.2 inches set in 1991. Thus far this month, about 8 inches of snow has already fallen.

"We do expect at least a small amount of slushy snow or perhaps sleet, freezing rain, and plain cold rain to develop as the Arctic air takes root over the southern Plains sometime from late Sunday or Sunday night to Tuesday," Walker explained.

Temps to Drop in the South

Amarillo, Texas, may swing from record-challenging warmth in the upper 80s on Thursday to the chilly 50s on Friday as a preliminary burst of chilly air sets in. And then the mercury may plunge from highs in the lower 70s on Saturday to the 20s Sunday night and Monday. Snow or an icy mix may add another dimension to the sudden burst of wintry weather.

Amarillo picked up early accumulations of snow last season when 5.9 inches fell on Oct. 25, 2019, but the average date of the first inch of snow isn't until Dec. 5. An inch or more of snow has blanketed the area as early as Oct. 8 when 2.9 inches piled up back in 1970.

The first several hours of the arrival of the arctic air will be accompanied by gusty winds, which will cause AccuWeather RealFeel® Temperatures to drop even lower than plummeting actual temperatures by 10 to 20 degrees or more. In addition to adding to the chill, gusty winds and cold air will cause wet areas to freeze on surfaces then lead to substantial blowing and drifting snow in some cases.