'God Redeems ALL THINGS': Ministry Leader Booted from Plane Ends Up Helping Save a Life on His New Flight 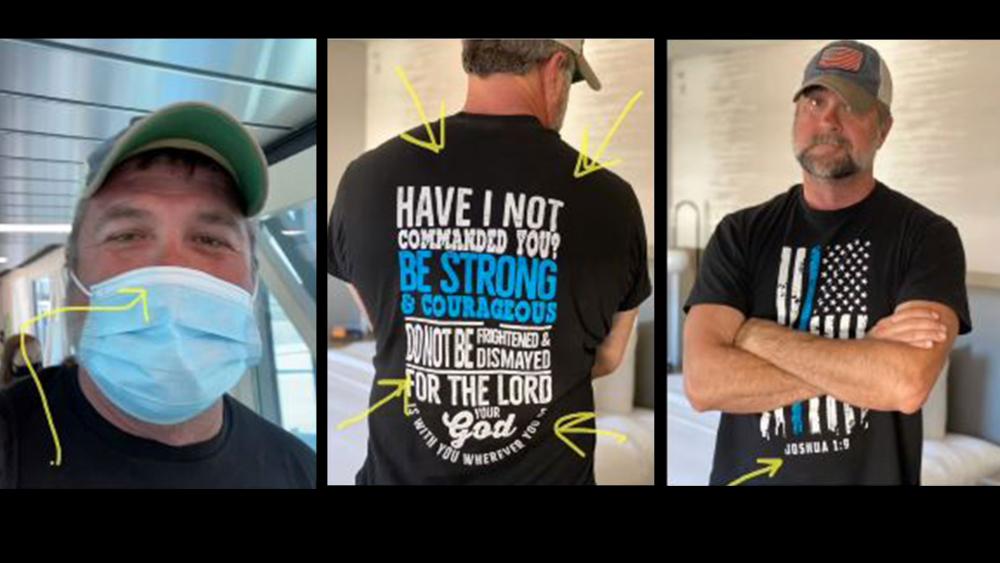 Victor Marx, the founder of  All Things Possible Ministries has posted a viral video to Facebook about how God can turn a tough incident into a life-saving moment.

In the three minute video posted on Sept. 23, Marx says he and his wife boarded a United Airlines flight when "a male airline flight attendant decided to harass" him.  According to the ministry leader, the flight attendant wanted Marx to raise his mask higher than his. In the video that was posted, Marx is seen in a photo wearing a mask covering his nose and mouth.

Marx said his wife was watching all of this unfold and couldn't believe it. "Is he serious?" she asked.

Then the attendant threatened to have Marx removed from the plane. When Marx questioned the man's reasoning, the flight attendant reportedly turned and walked away.

The video reveals that after a few minutes had passed, the captain of the plane, who Marx describes as being embarrassed, asked him to step outside.

Marx wonders, "What REALLY triggered the flight attendant to want me off of this plane?" He was wearing an American flag hat, and a Back the Blue t-shirt with the Bible verse, Joshua 1:9 imprinted on the back of the shirt.

"Have I not commanded you? Be strong and courageous. Do not be afraid; do not be discouraged, for the Lord your God will be with you wherever you go." - Joshua 1:9

Marx noted that even his KP service dog named Scout, who had helped him in Iraq while working with orphaned children affected by ISIS, was also confused.

"We've NEVER been kicked off a flight!" Marx said.

But then the video reveals that something amazing was about to happen to him and his wife.

Marx reported the plane's other passengers and crew members were very kind and apologetic.

"People knew what just occurred was not justified," he wrote in the video.

"So what did we do? We complied," Marx added.

The ministry leader says he and his wife got their luggage, rented a truck, found a hotel, and got up the next morning to drive to Los Angeles to take a different airline since he was banned from all United flights until they completed their internal investigation.

Marx then explains in the video that "it becomes very clear that God redeems ALL THINGS in His big plan for us all."

When the couple arrived at LAX and walked into the terminal they observed a man who was very disoriented and stumbling near the ticket counters.

"At times, the man would turn and swing violently and then stumble again," Marx recalled.

He tried to help the man, but the man collapsed to the floor and stopped breathing. He started CPR for about 8 to 10 minutes with help from an airport worker.

When the police arrived at the scene, they took over CPR efforts and were soon joined by EMT's with the fire department.  And the man named Michael responded to their efforts.

"Thanks to teamwork, he lived," Marx wrote. "Great job, police officers. They should be better funded not defunded."

As the video ends, Marx thanked his followers for all of their prayers for Michael. He also noted that he hoped the airline would lift his ban. After all, "30 years as a good customer should count for something," he wrote.

In an email to CBN News on Tuesday, Marx said, unfortunately, the airline's ban against him hasn't been lifted. "We found out that they have banned me permanently. They say once COVID passes they might reconsider, but we do not believe that to be true," he wrote.

"He (the flight attendant) said my mask wasn't high enough. But it was the same position as the pilot. What we can only deduct is my flag hat and shirt / support the blue and scripture triggered this fella," Marx noted.

Even though his wife and another ministry staff member were present when the incident occurred, United's internal investigation did not gather eyewitness reports from them, Marx says.

"We are very happy God redeemed this inconvenience and yet are concerned that one flight attendant can yield that much control or power over passengers without question or individual rights to respond," the ministry leader told CBN News. "We know there is a great divide in our society that is growing bigger, and we believe we might have been the unfortunate recipient of political bias."

CBN News contacted United Airlines for comment on the incident.

Leslie Scott, a spokesperson for United, told us in an email, "Following a thorough review of the incident that took place on Mr. Marx's Aug. 10 flight, we made the decision to ban the passenger due to his refusal to follow our facemask policy, as well as his threatening behavior toward our flight crew. The health and safety of all of our passengers and crew is United's highest priority."

United disputes Marx's depiction of how he was wearing his mask on the plane.

In the end, Marx says God still used the difficult incident for His glory, saying he was, "kicked off a flight to save a life."