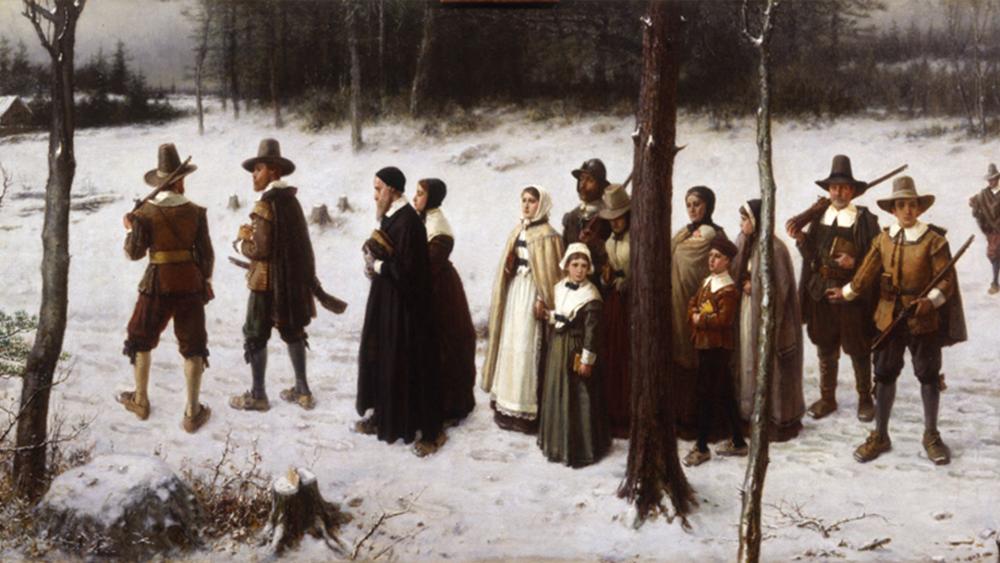 "The Return" and Franklin Graham’s 2020 Prayer March on the National Mall were certainly a good start to returning the nation to God. But it doesn’t end there. The next stop will be Plymouth, Massachusetts where, 400 years ago, the Pilgrims made a sacred covenant with God that this would be a nation to serve Him, love Him and follow His ways.

There in Plymouth, Carter Conlon of New York City’s Times Square Church believes he was led sovereignly to the very plot of land – Lot #1 – where the Pilgrims began to build and pray. And that’s where he’ll lead a nationwide call to God from 7:00 pm to 9:00 pm on Oct. 6.  It will be live-streamed so anyone anywhere can join in.

“We’re going to be hosting a prayer meeting from the very house built in 1790 that sits on the portion of ground where the first house in America was built by the Plymouth settlers in 1620,” Conlon said.

That first winter, those Pilgrims were freezing, starving, and deathly ill, but full of faith.

“It was in that house, that in a position of weakness, with half of them having given their lives the first year for the cause of freedom and religious freedom, they prayed,” Conlon shared.

America was Promised Freedom, But What Did It Do with that Freedom?

"And God promised them 400 years ago, they and their descendants would have that freedom here in what became the Land of the Free. But what did we do with that freedom?"

Conlon pointed out America enslaved an entire race of people. And today American families are broken, abortion is rampant, and the nation is unraveling.

“We’re going to ask God for forgiveness for what we did as a nation with the freedom God gave us,” the New York City pastor explained.

In a video titled Mercy Moments, Conlon pleads with Americans to join him Oct. 6.

“Everyone of us is being called at this moment, whether you live in New York City or you live in Ohio in a small town. Everyone has a part in what God wants to do.  He’s searching the land again,” Conlon says in the video. “This is what we’re facing in America today. God is looking for a people to agree with Him, that He could show us a Mercy Moment again in spite of our behavior.”

A Divine Appointment that Could Save a Nation

The Christian who’d bought the property where the Pilgrims first prayed began to feel for some reason God wanted him to get together with Pastor Conlon. A few weeks later, the pastor happened to sit down on a bench not 30 yards from the property. The homeowner and Conlon met and began to pray in that historically important house.

Conlon explained, “There was such an undeniable presence of God in that house, that when I went back to my hotel room that night, I couldn’t sleep. I said, ‘Lord, why did You lead me there?’”

‘My Heart Will be There Perpetually’

And God revealed to Conlon in 2nd Chronicles Chapters 6 & 7 how He would wait and wait in a place for His sinful people to return to Him.

Conlon quoted the words of the Lord, saying, "'And my heart will be there perpetually.' In other words, 'If you stray from me, I will wait here for you to come back'."

In other words, he argues that God has been essentially waiting in Plymouth, Mass. for 400 years. Now on Oct. 6, it’s time to return to Him.

'A God-initiated Moment in the History of This Nation'

In an essay titled, "What Have We Done With Our Freedom?" Conlon writes, "This is a pivotal moment for America. We’re going to pray and we’re going to believe that God is going to resurrect this nation again. This prayer meeting is not our idea; this is a God-initiated moment in the history of this nation. The very future of America now depends on our prayers."

"Tell everyone. Tell your family, tell your friends, and pray with us online on Oct. 6 from wherever you are. Let’s believe God for a mercy moment for America!"

Those who want to join can find out more information at the “It’s Time to Pray" website.