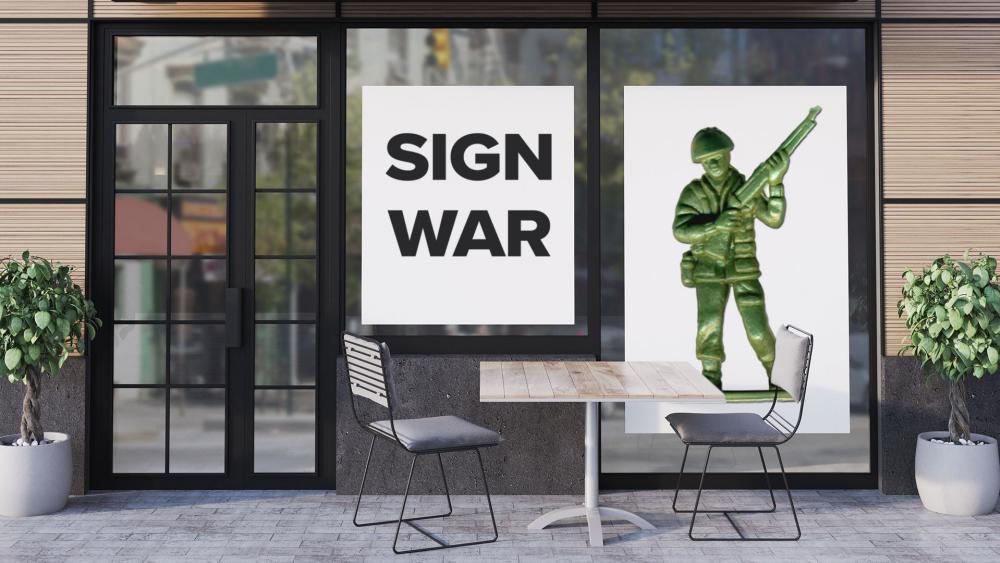 You may have heard of some great battles in American history such as Bunker Hill, Gettysburg, San Juan Hill, and Iwo Jima. But you probably haven't heard about the fun "sign war" that's being waged in the small town of Christiansburg, Virginia.

It all started when a music shop challenged a neighboring shoe store to a sign war with a message posted on its business sign.

And so the war began.

From restaurants to pharmacies to realtors, other local shops have joined in the fun, putting the small Virginia town on the map by poking fun at each other.

At one point, Super Shoes replied to the music store and a sushi restaurant at the same time saying, "Mosh Pits and Raw Fish: Both More Dangerous Than Shoe Shopping."

And Kabuki Sushi aimed a sign at Super Shoes and the Bridge Kaldro music store saying, "Yall Got Crocs but We Got Godzilla. We Shreddin This War Like Kaldro Shreds Guitars."

The local Holiday Inn also stepped up their game by posting:  "We've been quiet, but let's make this INNteresting."

Even the local Falling Branch Elementary School has fired off a round or two, saluting several businesses.

The Northwest Ace Hardware also fired a salvo at the Kabuki Japanese Steakhouse & Sushi with a sign that read: "Hey Kabuki! Your sushi wouldn't stink with a Yeti cooler! Sold Here...."

Even Christiansburg's First Church of God posted this message in front of their building:

"The sign war has been fun, spreading news of the Son. We want to do our part, bring love to every heart."

One resident started a Facebook group to keep track of all of the humorous signs. So far, the Christiansburg, VA Sign War page has gone viral, attracting more than 23,000 followers worldwide who want to share in the laughter and the positivity.

Followers of the group's page have left several encouraging comments.

"I just wanted to say the sign wars made it all the way to Ethiopia where I am from and I gotta tell you they made my day," one user wrote, leaving a laughing emoji on his post.

Another user commented, "Love how my little town is bringing so many across the world together with a sign war!"

And the group's page also attracted a couple of new followers on Monday who checked in from Edinburgh, Scotland and from Singapore.

The "war" is bringing in not only laughs but also dollars.

Since joining the war by posting song lyrics outside his store, one restaurant owner said his business is booming.

"It's amazing free advertisement for all of us," Kabuki Japanese Steakhouse owner Yoshi Koeda told WSLS-TV. "That's probably the best part of everything."

Ed Bridge, the owner of the Bridge Kaldro music store, told the station the idea for the sign war came from one of his employees.

"I'm just so humbled because this is bigger than my little music store," Bridge said.

It's a war that has brought a peaceful, positive feeling to the entire community.

Chelsa Stassin, the owner of Cut It Out Salon, told WDBJ-TV how it feels to be a part of town's sign wars.

"It feels amazing," Stassin said. "It's so funny to think that just being a small business, you could impact somebody with them reading my sign and driving by within a few seconds; it just completely like makes me so happy to see that it just brightens everybody's day, too."

Jonathan Friend, the owner of Clayton Wear, told the television station local businesses really had a tough time from the pandemic, but this really has been a clear sign of business leaders coming together to help each other.

"I think the signs are just really an homage we are really all in this together," he said. "So, it's been really uplifting to see all the businesses support each other."