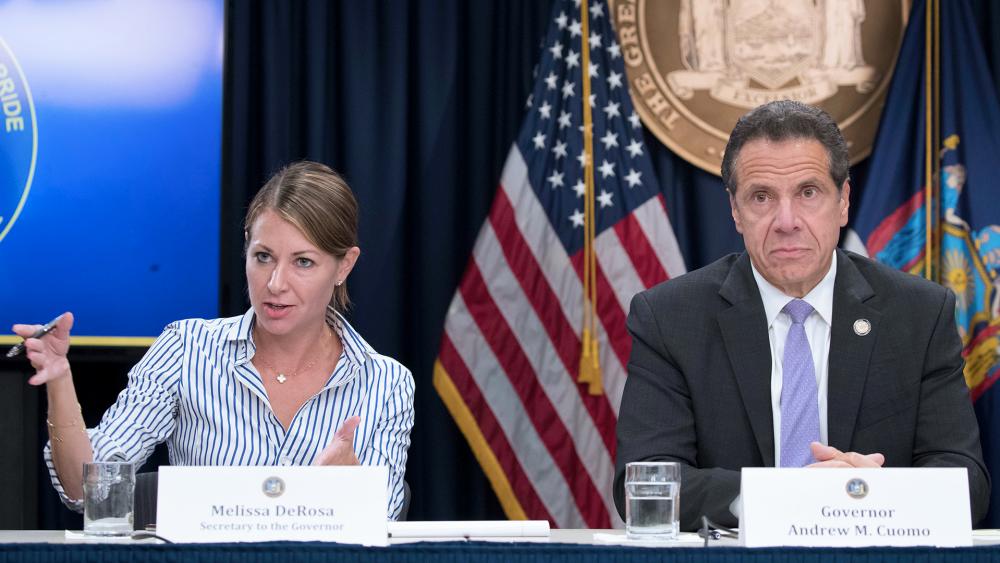 In this Sept. 14, 2018 file photo, Secretary to the Governor Melissa DeRosa, is joined by New York Gov. Andrew Cuomo as she speaks to reporters during a news conference, in New York. (AP Photo/Mary Altaffer, File)

Top Republicans and some Democrats in New York are blasting Gov. Andrew Cuomo after the New York Post reported one of his top aides privately apologized to Democratic lawmakers for withholding the real number of nursing home deaths from COVID-19, saying they feared the Trump administration would use those numbers against them.

Secretary to the Governor Melissa DeRosa told the lawmakers in the virtual meeting, "We froze" out of fear that the true numbers would "be used against us" by federal prosecutors, according to The Post.

The disclosure came as the Democratic governor and his administration were already facing backlash over their handling and reporting of outbreaks in nursing homes.

Some Republicans want Cuomo impeached or investigated for the alleged cover-up. The Associated Press revealed Thursday that Cuomo sent more than 9,000 COVID-infected patients back into nursing homes rather than sending them to other options like the USS Comfort which had sailed to New York to help with the crisis.

"For over six months, day after day, in briefing after briefing, Governor Cuomo stood before New Yorkers and lied about his directive that contributed to the deaths of thousands of seniors," said Dutchess County Executive Marc Molinaro, Cuomo's 2018 challenger.

"In the coming days, he will cynically try to convince us that it was for our own good — that it was someone else's fault. This is another lie. What is true, is Andrew Cuomo has proved himself unworthy of our trust, and unfit for public office," Molinaro stated in comments reported by Politico.

One Democratic state senator tweeted:  "Because of your decisions, thousands of people died who did not have to die."

You're only sorry that you all got caught.

Because of your decisions, thousands of people died who did not have to die.

In recent weeks, the Empire State has been forced to recognize the nursing home resident death toll is nearly 15,000 when it previously reported 8,500 - a number that excluded residents who died after being taken to hospitals.

“That played a very large role into this,” she added, saying the administration had asked legislative leaders whether it could “pause on getting back to everybody until we get through this period and we know what’s what with the DOJ.”

DeRosa issued a statement Friday saying the administration had to set aside lawmakers' request for data to deal with the Justice Department request first.

"I was explaining that when we received the DOJ inquiry, we needed to temporarily set aside the Legislature's request to deal with the federal request first. We informed the houses of this at the time," the statement said. "We were comprehensive and transparent in our responses to the DOJ, and then had to immediately focus our resources on the second wave and vaccine rollout. As I said on a call with legislators, we could not fulfill their request as quickly as anyone would have liked. But we are committed to being better partners going forward as we share the same goal of keeping New Yorkers as healthy as possible during the pandemic."

But it's unclear why New York couldn't provide data that nearly every other state published to state lawmakers and the Justice Department at the same time.

And lawmakers, including Assembly Member Richard Gottfried, have requested data about nursing home deaths since at least June.

Gottfried, a lawmaker who attended the Wednesday meeting and spoke to the AP, called the entire meeting with DeRosa “very disturbing.”

“They weren’t releasing data from the investigation,” he said. “It’s not the sort of thing they would make up. I don't think the state’s explanation is acceptable. The request for the data from me and others were linked back weeks before the August hearing. And certainly long before any expressions by the DOJ that I’m aware of.”

When asked whether lawmakers would subpoena the Cuomo administration, he said, “I don’t think the New York Legislature is well organized for conducting investigations."