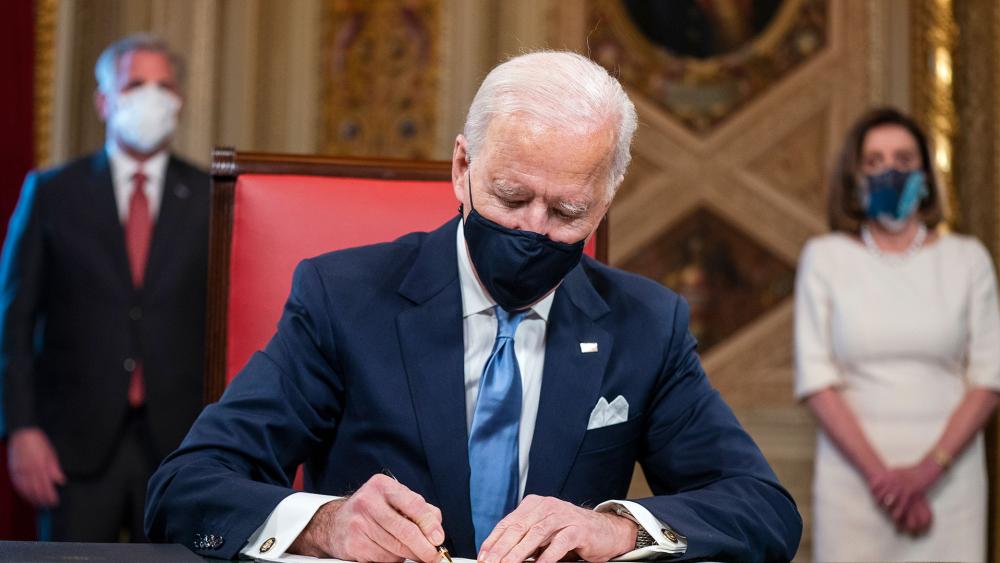 Just a few hours into his presidency, Biden struck at the heart of Trump's policy legacy signing a series of executive orders to reverse the former Trump administration's policies in key areas, including immigration, climate change and the handling of the COVID-19 pandemic in order to fill campaign promises.

Biden planned to halt construction on Trump's U.S.-Mexico border wall, end the ban on travel from terrorist-haven countries, rejoin the Paris Climate Accord and the World Health Organization, and revoke the approval of the Keystone XL oil pipeline.

In one of his first acts, Biden is reversing one of Trump's first acts, overturning what is variously known as the "travel ban" or the "Muslim ban," although it's actually intended to target terrorist countries. Trump in January 2017 banned foreign nationals from seven mostly Muslim countries from entry into the country. After a lengthy court fight, a watered-down version of the rule was upheld by the Supreme Court in a 5-4 decision in 2018.

The new administration says it will improve the screening of visitors by strengthening information sharing with foreign governments and other measures.

Biden is also immediately ending the national emergency that Trump declared on the border in February 2018 to divert billions of dollars from the Defense Department to border wall construction. He's also halting construction to review contracts and how wall money might be redirected.

Biden also is directing the government to rejoin the World Health Organization (WHO), which Donald Trump withdrew from earlier this year after accusing it of incompetence for allowing China's communist regime to cover-up the coronavirus.

Symbolizing Biden's commitment to a more prominent global role, White House coronavirus coordinator Jeff Zients announced that Dr. Anthony Fauci will deliver a speech Thursday to the WHO as head of a U.S. delegation. Fauci, the government's top infectious disease expert, will lay out how the administration intends to work with the WHO on reforms, supporting the coronavirus response and promoting global health and health security.

Biden is signing an executive order to rejoin the Paris Climate Accord, fulfilling a campaign pledge to get back into the global climate pact on day one of his presidency. It will take 30 days for the U.S. to officially rejoin the agreement.

The new president will also sign an order to revoke the presidential permit for the Keystone XL pipeline. When operational, the pipeline was expected to bring more than 800,000 barrels of crude oil a day from the oil-rich Canadian province of Alberta to Nebraska.

Fox News reports that Canadian officials fear the cancellation will not only do away with jobs on both sides of the border but will also weaken Canada's relationship with the U.S. as well as undermine U.S. national security.

Richard Madan, a correspondent for Canada's, CTV News, said in a tweet that Canadian officials view the expected cancellation as "a punch in the face to Canada."

A Canadian official tells me scrapping #Keystone project is “a punch in the face to Canada”, adding PM Trudeau raised the issue on his congratulatory call with Biden, who said they would discuss further after Inauguration .....

Another order signed by the president included a new mask mandate requiring people to wear masks on all federal property.

While Biden signed 15 executive orders Wednesday, many more are expected in the coming days.