Day of Shaming: Trump Says 'Mike Pence Didn't Have the Courage', McConnell Warns It Will 'Damage Our Republic Forever' 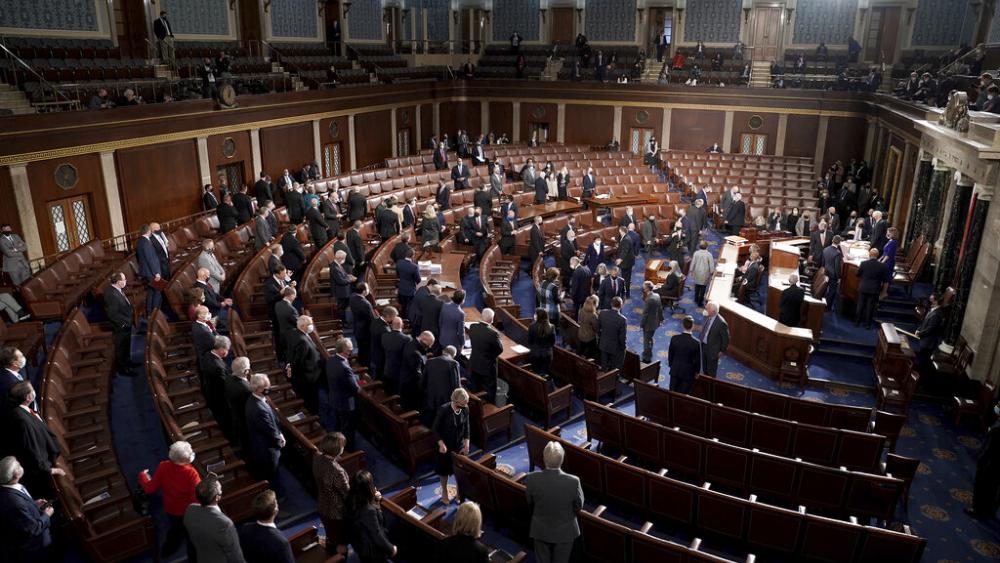 Speaker of the House Nancy Pelosi, D-Calif., and Vice President Mike Pence officiate as a joint session of the Congress Wednesday. (Erin Scott/Pool via AP)

House Speaker Nancy Pelosi said Wednesday that the day's turmoil on Capitol Hill presents  “a shameful picture of our country" to the world.

Pelosi also announced Congress would resume the Electoral College proceedings, making the decision in consultation with the Pentagon, the Justice Department, and the vice president, who is presiding over the electoral process.

The counting of electoral votes was suspended after protestors breached US Capitol Police security checkpoints and stormed the Capitol building while Congress was meeting in a joint session to count and certify the states' votes.

Earlier Wednesday, Vice President Mike Pence said it is only his job to open and count electors' votes. In a letter to Congress, Pence said, "It is my considered judgment that my oath to support and defend the Constitution constrains me from claiming unilateral authority to determine which electoral votes should be counted and which should not."

President Trump pushed back tweeting: "Mike Pence didn't have the courage to do what should have been done to protect our country and our Constitution, giving states a chance to certify a corrected set of facts, not the fraudulent or inaccurate ones which they were asked to previously certify."

The Vice President's three-page letter was released minutes before he presided over the Joint Session of Congress. The state certification began in alphabetical order starting with Alabama. But when it got to Arizona, more than half of House Republicans challenged the results.

"I rise today to object to a number of states that did not follow the constructional requirement when selecting electors," said US Rep. Steve Scalise (R-LA) minority whip.  "Madam Speaker, this is something that is clear that our founding fathers debated about as a fundamental decision of how we chose our president."

Objections in writing allow two hours of debate in both the House and Senate. Thirteen senators including Sen. Ted Cruz (R-TX) objected to Arizona's electoral votes.

"The electoral count act allows objections such as this one for votes that were not regularly given and let me be clear this objection is for the state of Arizona but it is boarder than that," Cruz said. "It is an objection for all six of the contested states to have a credible objective impartial body hear the evidence, and make a conclusive determination that would benefit both sides, that would improve the legitimacy of this election."

"The voters have spoken and if we overrule them it would damage our republic forever," he said. "My colleagues nothing before us proves illegality anywhere near the massive scale. The massive scale that would have tipped the entire election. Nor can public doubt alone justify a radical break when the doubt itself was insisted without any evidence."

"Congress does not determine the outcome of elections, the people do. The Congress is not endowed to administer elections, our states are given that power. By the end of the proceedings today, it will be confirmed once again something that is well known and well settled. The American people elected Joe Biden and Kamala Harris to be the next president and vice president of the United States," said Sen. Chuck Schumer (D-NY) Senate minority leader.