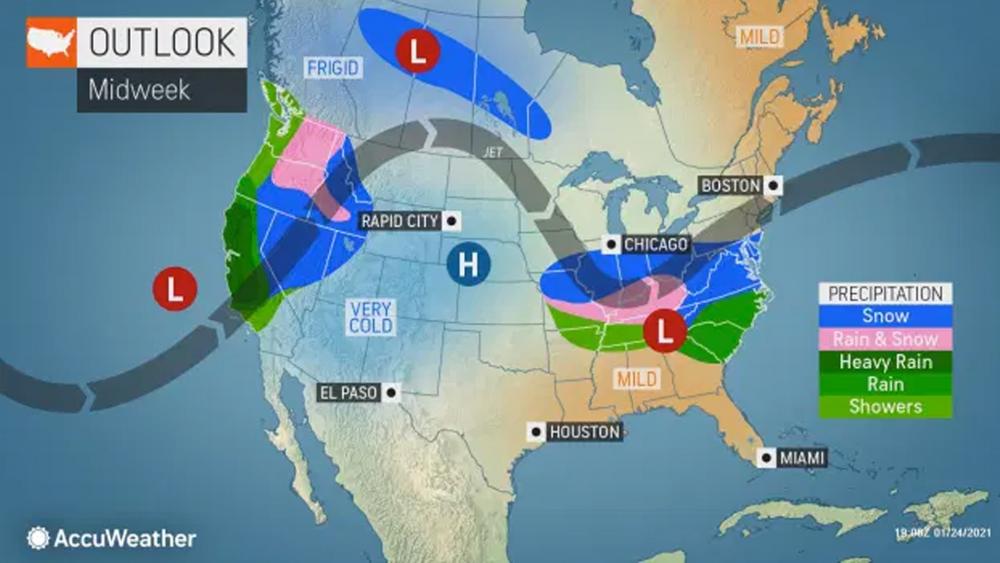 On the heels of an early week system bringing wintry conditions to a 1,500-mile-long swath of the country, a new storm will form and may unleash snow much farther south than its predecessor.

The upcoming storm will be a quick hitter, according to forecasters, but can unleash just enough rain and snow to lead to disruptions to travel and daily routines.

"A storm is expected to rapidly intensify as it heads off the Carolina coast Wednesday night into Thursday morning," AccuWeather Senior Meteorologist Carl Erickson said.

A fresh injection of cold air will allow precipitation on the northwestern side of the storm to fall as snow, first across portions of the middle Mississippi, Ohio, and Tennessee valleys on Wednesday and then into the central and southern Appalachians by Wednesday night.

The snow around the middle of the week should generally be light, leaving behind a fresh coating to 3 inches from southeastern Missouri and northern Arkansas through Kentucky and parts of northern Tennessee. A track farther to the north could bring some accumulation into southern Indiana and Ohio as well. Similarly, a track farther to the south could put the general 1- to 3-inch swath through middle Tennessee, including the Nashville area.

It is these relatively "minor" snow events that can take some motorists off guard, so travelers along stretches of interstates 55, 65, 69 and 75 should be prepared to travel at lower speeds than usual in case of slippery spots. Bridges and overpasses, as well as areas normally shaded during clear days, would be the first places to become slippery where untreated.

Higher snowfall totals are possible farther east as the storm gains strength while sweeping off the southern Atlantic coast.

From 1-3 inches of snow with locally higher amounts can fall across the higher terrain of West Virginia, southwestern Virginia and western North Carolina.

The anticipated track of the storm would spare the Washington, D.C., Baltimore and Philadelphia areas from much in the way of accumulation with at most a period of flurries or light snow late Wednesday night into early Thursday morning. AccuWeather meteorologists will monitor whether any northward shift in the storm track could bring more of an accumulating snowfall to these cities. At this time, commuters in this zone should expect the potential for enough snow to make roads slippery. These cities may wind up completely dry should the storm take a more southern track.

Farther to the north, a secondary feature or perhaps a northward extension of the southern storm is likely to produce snow showers in much of New England during Wednesday and Wednesday night. Snowfall in this part of the Northeast is likely to range from a coating to an inch with locally higher amounts.

The southern periphery of the storm will feature a soaking rain from the Gulf Coast to the Carolinas. However, as colder air rushes into the strengthening storm, precipitation could change over to the wintry variety in some places.

"Cold air flooding in on the backside of the storm may catch up to the precipitation in time to allow for some snowflakes to mix in later Wednesday night and Thursday morning across portions of North Carolina, including around the Raleigh metro area," Erickson said.

There is a chance, should enough cold air sweep in, that a few inches of snow could fall the coastal areas of northeastern North Carolina and the Tidewater of Virginia. At the very least, rain ending as some snowflakes is possible all the way to the coast.

Regardless, those heading out on Thursday morning will want to use caution across the region as there can be slippery spots on untreated surfaces.

Drier but cold conditions will then settle in behind the storm for the remainder of the week.