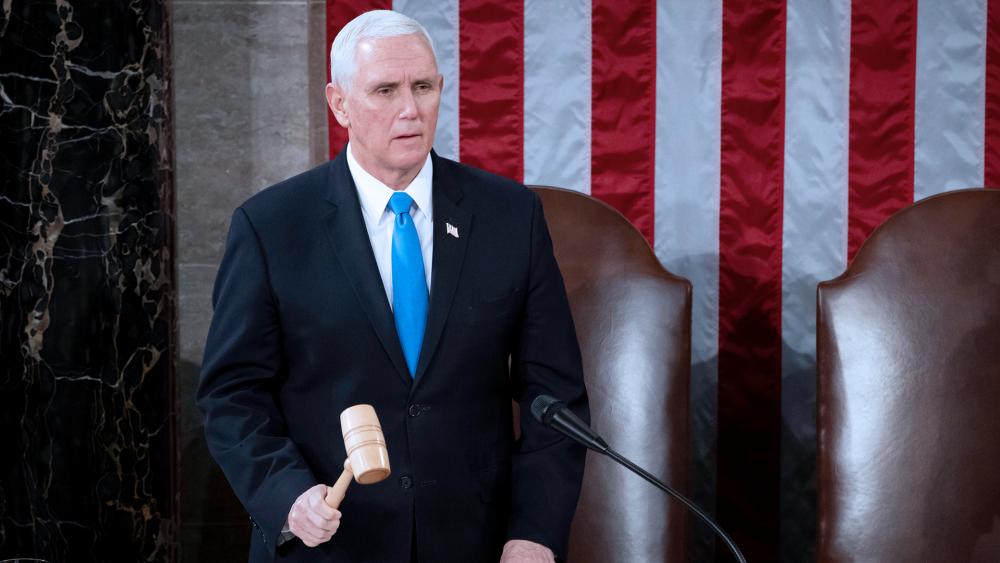 Vice President Mike Pence officiates as a joint session of the House and Senate convenes to confirm the Electoral College votes cast in November's election, at the Capitol in Washington, Wednesday, Jan. 6, 2021. (Saul Loeb/Pool via AP)

A lot of attention has been focused on the role of Vice President Mike Pence, many wondering if he has the ability to throw a wrench into the election results being certified during Wednesday's joint session of Congress.

President Trump hit on that topic multiple times today, issuing a tough challenge to Pence at the "Save America Rally" in Washington, DC.

"If Mike Pence does the right thing we win the election," Trump said.

"All Vice President Pence has to do is send it back to the states to recertify and we become president, and you are the happiest people," he said.

Later Trump also said, "Mike Pence is going to have to come through for us. If he doesn't, that will be a sad day for our country."

Can Pence Send Electoral Dispute Back to the State Legislatures?

During an interview on CBN's The 700 Club Wednesday, CBN News Political Analyst David Brody told host Pat Robertson that there was one real piece of drama to watch for during today's joint session of Congress.

"Will Mike Pence boot this back (the electoral votes) to the state legislature?" Brody said. "What he could do, is rather than just looking at the envelope and saying, 'No, I decertify these results.'  No one's thinking he can do that. Maybe the President thinks he can do that. But no one thinks he can do that. But what he could do, is as President of the Senate basically say, 'State legislatures, we have an issue here. We have electoral votes for Joe Biden, but we also have seven other states that have sent up dueling electors'."

"I have checked on this," Brody said. "There are seven states that have sent dueling electors to the National Archives. They are ready to go. So what Mike Pence could say is, 'Look, we've got a contested election here. We have a disputed election.' Then he could ask the state legislatures to figure it out and get back to him. That's what they (Trump supporters) are hoping."

Pence Explains His Role in The Electoral Dispute

Wednesday morning, Vice President Pence sent a letter to all members of Congress ahead of today's Joint Session of Congress.  In the letter, Pence addresses his role as outlined in the Constitution, serving as the President of the Senate and the presiding officer as the electoral votes are counted.

"Given the controversy surrounding this year's election, some approach this year's quadrennial tradition with great expectation, and others with dismissive disdain," Pence wrote. "Some believe that as Vice President, I should be able to reject electoral votes unilaterally. Others believe that electoral votes should never be challenged in a Joint Session of Congress."

"After a careful study of our Constitution, our laws, and our history, I believe neither view is correct," the Vice President noted.

"The President is the chief executive officer of the Federal Government under our Constitution, possessing immense power to impact the lives of the American people.  The Presidency belongs to the American people, and to them alone. When disputes concerning a presidential election arise, under Federal law, it is the people's representatives who review the evidence and resolve disputes through a democratic process," Pence continued.

"Our Founders were deeply skeptical of concentrations of power and created a Republic based on the separation of powers and checks and balances under the Constitution of the United States," he explained. "Vesting the Vice President with unilateral authority to decide presidential contests would be entirely antithetical to that design."

"It is my considered judgment," Pence continued, "that my oath to support and defend the Constitution constrains me from claiming unilateral authority to determine which electoral votes would be counted and which should not."

Do the Numbers Add Up?

Meanwhile, at the huge rally with his supporters in front of the White House today, Trump said the numbers from the election just don't add up.