NBA, Lebron James, and Nike Called Out Over China: ‘The Hypocrisy Is Overwhelming’ 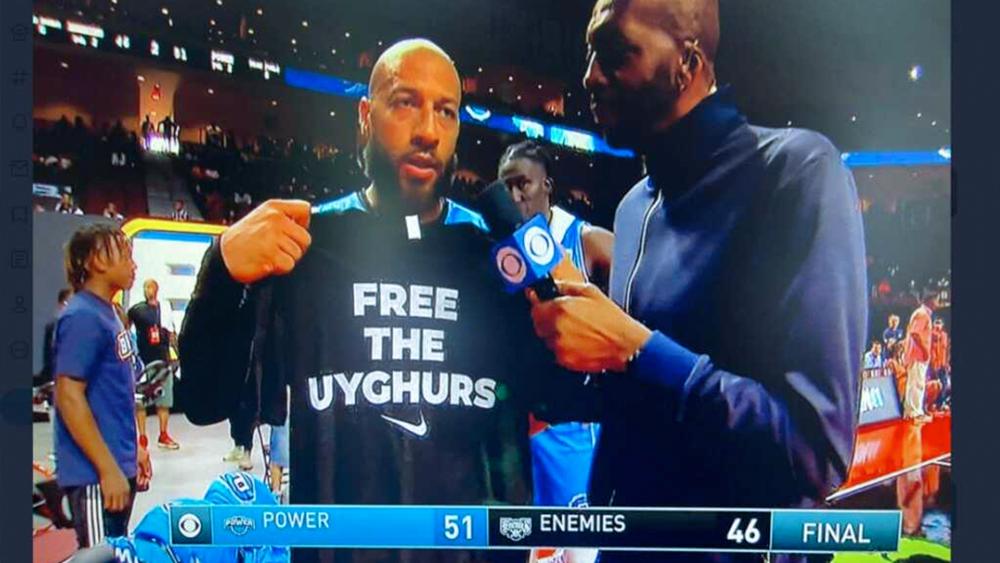 While the NBA has been criticized for championing social justice issues but ignoring China’s human rights abuses, The Big 3's Royce White is calling out China for holding millions of Uyghurs.

LISTEN TO MORE ON LEBRON, NBA HYPOCRISY ON TODAY’S PODCAST:

He’s also calling out the media for largely ignoring his message.

“When you know a moment like this should be going viral but instead you get crickets from media outlets,” the former NBA first-round draft pick wrote. “That’s when you know you’re doing it the right way. When it doesn’t suit anybody to talk about justice and freedom, that’s when you should talk about it.”

White, who appears to be of Muslim faith, has been critical of the NBA’s refusal to speak out against China. He has also criticized the hypocrisy of Nike, both directly and indirectly, with the logo on his t-shirt features what appears to be a reverse Nike swoosh.

How would @NBA have responded?

White has either worn or displayed “Free the Uyghurs” on t-shirts and even written the call to justice on his head so it could be seen during play.

Faithwire has reported previously on China’s ongoing human rights abuses in a number of areas, including against the Uyghurs.

Uyghurs are a Muslim ethnic group in the north-western region of Xinjiang, and China has been accused of committing crimes against humanity and possibly even genocide as evidence of mass concentration camps surfaced recently.

White issued heavy criticism of Lebron James, NBA, and Nike in an interview with Byline Times calling their hypocrisy “overwhelming”.

"The hypocrisy of the @NBA, @KingJames and @Nike is overwhelming" towards the Uyghur genocide.

My interview for @BylineTimes with former NBA player @Highway_30 on why he speaks out for the Uyghurs.https://t.co/4NfsYLtthW

White sounded off in the interview:

“The Uyghur concentration camps are the defining humanitarian issue of our time. It’s a litmus test for coherence in our ideas about justice.”

On the NBA’s silence on the Uyghur genocide, the basketball star said that “by and large, the NBA usually plays chameleonic politics.”

“To see them bend the knee for China in this situation is damning and absolutely irresponsible,” he added. “To see so many players and people go along with it is very disappointing… If my loved ones or I were locked in these camps, it would certainly be devastating to watch people bend the knee, but it would be especially devastating to see it from athletes and organizations that champion human rights.”

White also said that basketball players such as LeBron James and the sportswear company Nike were indulging in “hypocrisy” in their respective positions towards human rights. “LeBron James needs to become much more serious about having consistency in the domain of social issues, leadership, truth, and self-sacrifice,” he said. “Nike too for that matter. The hypocrisy is overwhelming and truly undermines their other humanitarian efforts.”

The Big 3 is a 3 on 3 basketball league founded by hip-hop star and actor Ice Cube and is gaining momentum as it grows and expands since its inception in 2017. Expect to see former NBA stars participating, and White’s calls for attention to the Uyghur persecution to continue.