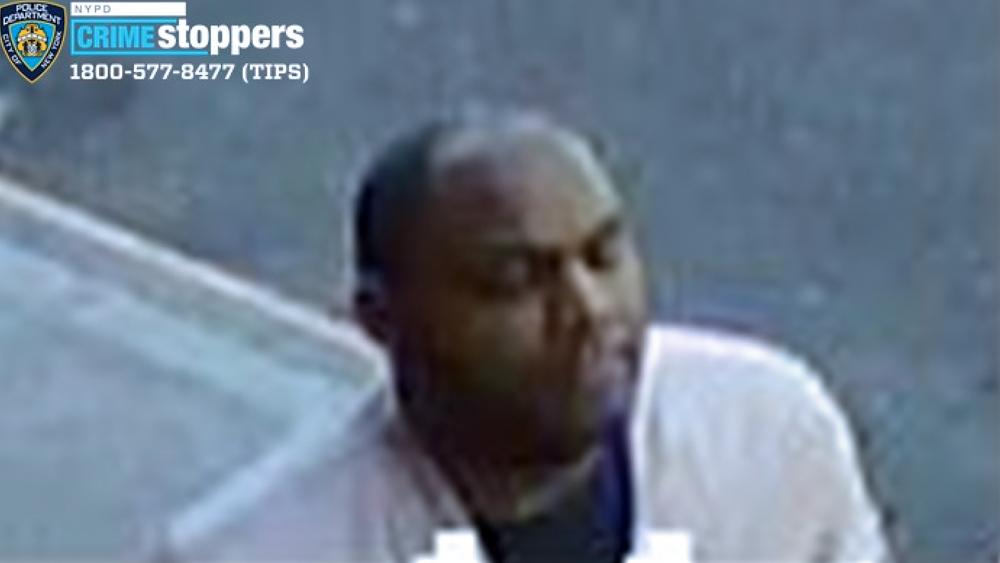 This image taken from surveillance video provided by the New York City Police Department shows a person of interest in connection with an assault of an Asian American woman, Monday, March 29, 2021. (Courtesy NYPD via AP)

A parolee convicted of killing his mother nearly 20 years ago was arrested on charges including felony assault as a hate crime, in an attack on an Asian American woman in New York City, police said Wednesday.

Police said they believe Brandon Elliot, 38, is the man seen on surveillance video kicking and stomping the woman near Times Square on Monday. They said Elliot was living at a hotel that serves as a homeless shelter a few blocks from the scene of the attack. He was taken into custody at the hotel around midnight. Tips from the public led to his apprehension, police said.

Elliot was convicted of stabbing his mother to death in the Bronx in 2002 when he was 19. He was released from prison in 2019 and is on lifetime parole. The parole board had previously twice denied his release. His record also included an arrest for robbery in 2000.

The woman identified as Vilma Kari, 65, was reportedly on her way to church. She was discharged from the hospital Tuesday after being treated for serious injuries, a hospital spokesperson said.

WCBS-TV reports the attack happened on West 43rd Street just before noon Monday. The video that captured the alleged assault shows a man kicking the woman to the ground and stomping on her head several times as she lays on the sidewalk.

Police said he made several anti-Asian statements as the woman lay on the ground. Witnesses told the television station the man said, "You don't belong here," before he ran off.

Link to a tweet containing a video of the alleged attack -- Warning: This Tweet Contains Cursing and Disturbing Images.

"She said he was walking towards her and he locked eyes with her," the woman's daughter's boyfriend, who gave his first name as Luca, told The New York Post. "She tried to avoid him, like how people do when you walk in New York City, but he came right for her. After the first hit, she wasn't even there. I can't see how she got up from that."

Kari suffered a fractured pelvis and severe bruising to her face, the newspaper reported.

The NYPD Hate Crimes division posted photos of the alleged suspect to Twitter with the hope the public would be able to help identify him.

"Help identify the below individual wanted in connection to an assault. On Monday, March 29th at 11:40 AM, at 360 West 43rd St, a female, 65, was approached by an unidentified male who punched and kicked her about the body and made anti-Asian statements. Info? 1-800-577-TIPS," the NYPD tweeted.

Help identify the below individual wanted in connection to an assault. On Monday, March 29th at 11:40 AM, at 360 West 43rd St, a female, 65, was approached by an unidentified male who punched and kicked her about the body and made anti-Asian statements. Info? 1-800-577-TIPS. pic.twitter.com/LkwfYhMCLr

Meanwhile, a security guard at a luxury Manhattan building who witnessed the attack was suspended Tuesday after video showed him doing nothing to aid the woman. Instead, the video shows him shutting the building's front door, according to The Post.

Two workers inside the building who appeared to be security guards were seen on the surveillance video witnessing the attack but failing to come to the woman's aid. Their union said they called for help immediately. The attacker was able to casually walk away while onlookers watched, the video showed.

The Brodsky Organization, which manages the building, said its workers "have been suspended pending an investigation in conjunction with their union."

In a statement posted to Instagram, the company said it "condemns all forms of discrimination, racism, xenophobia, and violence against the Asian-American community."

"The staff who witnessed the attack have been suspended pending an investigation in conjunction with their union," the statement said. "The Brodsky Organization is also working to identify a third-party delivery vendor present during the incident so that appropriate action can be taken."

New York City Mayor Bill de Blasio called the video of the attack "absolutely disgusting and outrageous" and said it was "absolutely unacceptable" that witnesses did not intervene.

"I don't care who you are, I don't care what you do, you've got to help your fellow New Yorker," de Blasio said Tuesday at his daily news briefing.

"If you see someone being attacked, do whatever you can," he said. "Make noise. Call out what's happening. Go and try and help. Immediately call for help. Call 911. This is something where we all have to be part of the solution. We can't just stand back and watch a heinous act happening."

The attack comes amid a national spike in anti-Asian hate crimes and happened just weeks after a mass shooting in Atlanta that left eight people dead at massage parlors, six of them women of Asian descent.