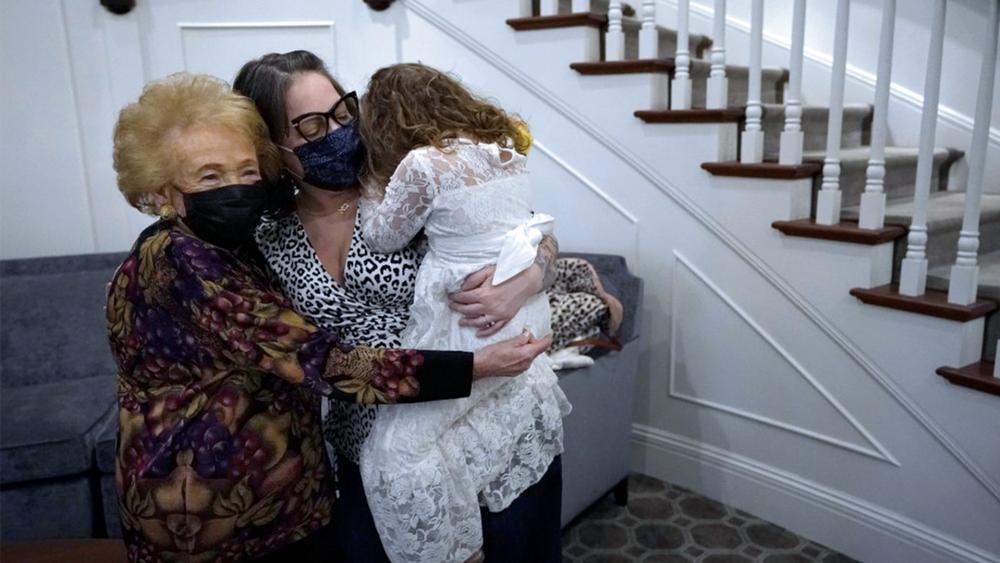 An 88-year-old woman in Ohio broke down in tears as her son hugged her for the first time in a year. Nursing home residents and staff in California sang “Over the Rainbow” as they resumed group activities and allowed visitors back in. A 5-year-old dove into the lap of her 94-year-old great-great-aunt for a long embrace in Rhode Island.

Nursing homes, assisted living facilities and other kinds of elderly residences battered by COVID-19 are easing restrictions and opening their doors for the first time since the start of the pandemic, leading to joyous reunions around the country after a painful year of isolation, Zoom calls, and greetings through windows.

The vaccination drive, improved conditions inside nursing homes, and relaxed federal guidelines have paved the way for the reunions.

There have been welcome-back parties, birthday celebrations, coffee hours on the patio, and more in recent days, giving older Americans and their families a glimpse into what life may look like in a post-vaccine world.

“This is the beginning of the very best to come, hopefully, for all of us,” said Gloria Winston, a 94-year-old retirement community resident in Providence, Rhode Island. “The world is going in the right direction. We need the nourishment of each other.”

Long-suffering families say the reopenings are well overdue. Most elderly care residents and many staffers have been fully inoculated for weeks since they were among the first vaccinated in the nationwide rollout.

Roughly 1.4 million residents and 1 million staffers at long-term care facilities are fully vaccinated, according to the Centers for Disease Control and Prevention.

COVID-19 cases and deaths in the facilities have also plummeted, from a peak of more than 30,000 cases and 7,000 deaths among residents in one week in December to fewer than 1,300 cases and 500 deaths in all of last week, according to the CDC.

(Overall in the U.S., the death toll has topped 540,000. Deaths per day have plummeted to an average of 1,000, down from an all-time high of over 3,400 in mid-January and the lowest level since early November. New cases are running at a still-troubling average of about 54,000 per day, plunging from a quarter-million per day in early January.) 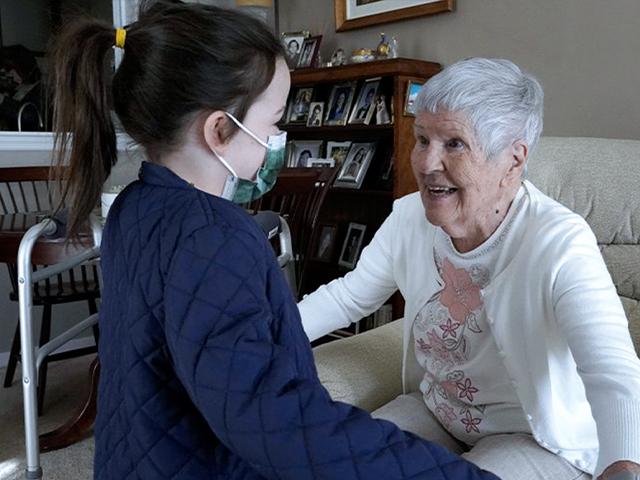 Federal regulators, in recognition of the improving situation, recommended earlier this month that long-term care facilities allow indoor visits at all times.

In Rhode Island, the first visitors Winston welcomed into the Laurelmead Cooperative since the outbreak started were her great-niece and her 5-year-old great-great-niece.

The three shared a flurry of hugs last week before Cordelia Cappelano, Winston’s great-great-niece, retreated, shyly burying her head in her mother’s body.

“I think I’ve had better hugs in my day,” Winston teased. “It’s as if we’re not family anymore.”

But after nearly two hours playing and catching up, Cordelia warmed up. She dove into Winston’s lap for one last hug before it was time to go.

“To be able to be this close and have Cordelia melt around her has just been wonderful,” said Wensday Greenbaum, Winston’s great-niece. “It’s just a release of all that anxiety and sadness that comes with being isolated. It’s been a difficult year, and this is one step closer to normalcy.” 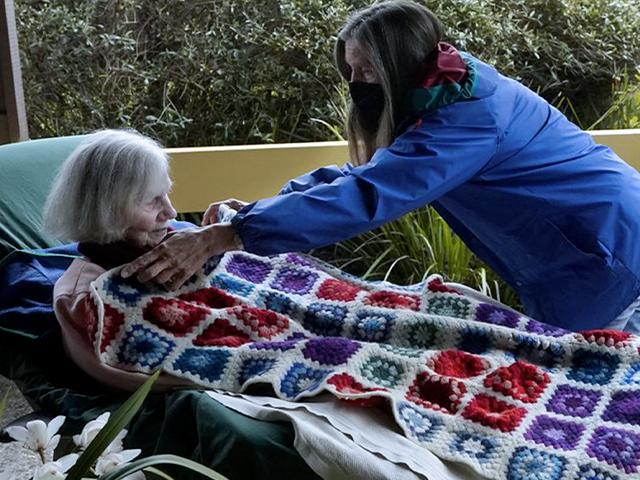 Celia Olson, right, adjusts a blanket on her mother, Connie, a resident at Chaparral House, while interviewed during a visit in Berkeley, Calif., Thursday, March 18, 2021. (AP Photo/Jeff Chiu)

In California last week, Celia Olson sat on the patio with her 92-year-old mother, Connie, at the Chaparral House in Berkeley. It was their second time meeting since visits recently resumed at the nursing home.

“This is really nice,” Connie Olson said as her daughter placed a blanket over her.

Over the past year, Celia Olson, a 65-year-old veterinarian, was able to see her mother only through a window or via Skype. Now both are vaccinated.

“It’s been a year of everybody just being traumatized and trying to understand how to navigate through the coronavirus situation,” Celia Olson said.

Brungs recalled how his mother — who is paralyzed from the waist down and spends most of her time alone — cried and told him how much she missed him during their 15 minutes together.

He promised her he would stay longer and play her favorite game — Yahtzee — when indoor visits at Ohio nursing homes officially begin on Tuesday.

“It was wonderful,” Brungs said. “The hug I got from her, it was just unimaginable how much it made me feel.”

“COVID robbed a year from us — a year where we couldn’t hug her, kiss on her and love her. That was tough, but now we’re making the most of it,” said the 27-year-old from LaFollette, Tennessee. “COVID is a nasty thing, but the one good thing about it is that it was a wake-up call to be really grateful for what you have.”

Other states are still reviewing and updating their policies to reflect the new federal guidance.

Many elderly residences say they will be taking a measured approach to reopening their doors, meaning stricter restrictions will probably persist in the short term in many places, to the frustration of families. 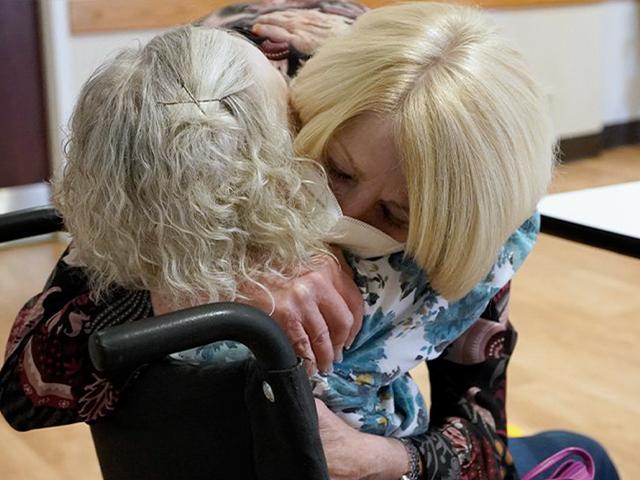 Mary Claire Lane, 86, left, a resident at Hellenic Nursing and Rehabilitation Center, in Canton, Mass., shares a hug with her daughter Anne Darling, of Attleboro, Mass., right, during a visit, Thursday, March 18, 2021, at the nursing home, in Canton. (AP Photo/Steven Senne)

In Massachusetts last week, visits at the Hellenic Nursing and Rehabilitation Center in Canton, some 20 miles (32 kilometers) south of Boston, were still limited to sit-downs in the dining room, with guests and residents separated by a clear plastic barrier.

A staffer was on hand to limit encounters to 30 minutes and make sure hugs and other physical contact happened only at the beginning and end of the session.

Anne Darling, who was visiting her 86-year-old mother, Mary Claire Lane, on Thursday, said she hoped the home would loosen its restrictions soon to allow her to bring the family’s beloved dog and younger family members.

“We miss her and she misses us,” Darling said. “If we could just bring in the little ones, it would just bring a joy to her heart. I know she’s well cared for, but it just gets lonely.”

In Bristol, Rhode Island, Charlie Galligan said visits have been gradually improving at his mother’s nursing home, but not fast enough. Most visits at Saint Elizabeth Manor are still limited to 30 minutes in the common dining room with social distancing and other precautions, he said.

Galligan’s 88-year-old father, Jack, who has Alzheimer’s, and his 84-year-old mother, Audrey, who has a traumatic brain injury, were recently granted a compassionate care visit.

The couple, who can barely communicate with each other but spent nearly every day together before the outbreak, were allowed to hug twice and spend up to an hour together.

“It’s heart-wrenching,” Galligan said. “My dad has declined so much more in the past year. He’s lost without her.”