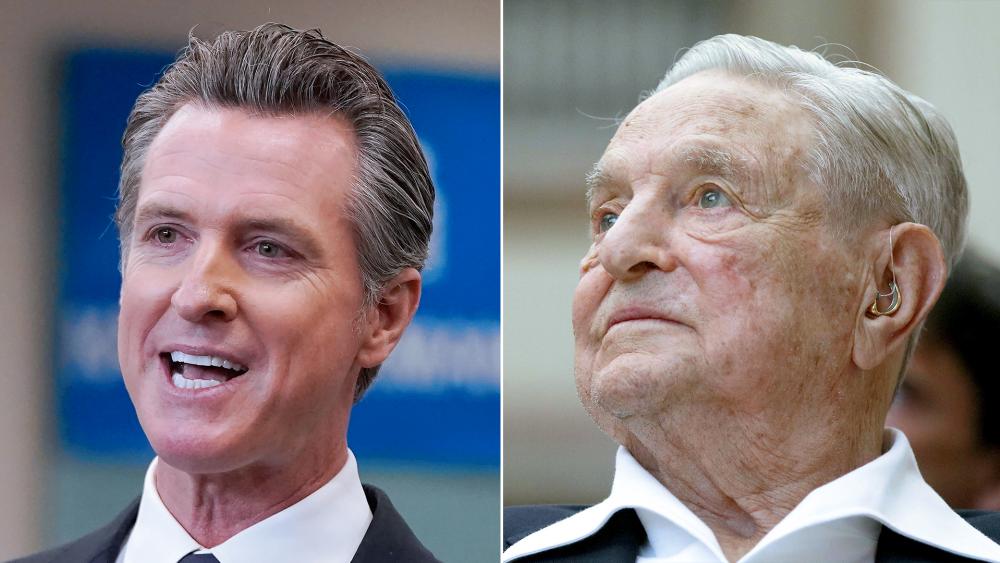 Gavin Newsom's battle to hold on to his job as governor of California just got an extra infusion of cash from billionaire and leftist political sugar daddy, George Soros.

Soros reportedly added another $500,000 to the governor's coffers through a group called "Stop the Republican Recall of Governor Newsom," bringing his overall contributions to the embattled Newsom to a cool $1 million. The contribution, made on Monday, was Soros' third donation to the PAC, following a total of $500,000 from several earlier donations, according to Fox News.

The added donation comes as the recall election is shaping up to be much closer than first thought.

Larry Elder, talk radio host, and conservative commentator is leading the pack of 46 challengers against Newsom, should the recall succeed.

The Daily Caller reports that polls show Elder is slightly ahead of the incumbent Newsom less than two weeks ahead of the California recall election. If victorious, Elder would be the first African American governor in the history of California.

Early voting has begun in California with 20% of residents having already marked their ballot.  With recall voting day just ahead on Sept. 14, the results show so far that a majority of Latinos who voted for Newsom in 2018 by 64%, are now favoring his recall, according to John Fund of National Review.

There's no question Newsom is in the fight of his political life. If the recall succeeds, it threatens not only his own political career but the one-party rule by Democrats in California for the first time in nearly twenty years.

How did Newsom get in such a mess?

Fund writes that his governance during COVID-19 may have been Newsom's undoing. "His handling of COVID-19 has been characterized by constantly shifting lockdowns, closed schools, vaccine-distribution snafus, and an unemployment-benefits scandal that may have seen $31 billion improperly go to prisoners, fraudsters, and people out of state. Half of the state's people are under a mask mandate."

And as CBN News reported, he didn't help himself by hypocritically defying his own lockdown mandates and boosting his elitist credentials by dining at the opulent French Laundry, a top Napa restaurant, while his restrictions were snuffing the life out of many of California's small businesses and restaurants.

The Democrat governor's mandates for schools have followed the dictates of the teachers' unions by keeping schools locked down, forcing kids to stay home, and inflicting harm on those who have no alternative to the public schools.

She told Fox News's Tucker Carlson on his show Thursday night that she voted for the recall, which she says is bipartisan, and that she resented the false narrative put out by Newsom that the recall campaign was a "right-wing conspiracy."

"I was tired of the 'rules for thee but not for me' attitude of the prince of the French Laundry, who shut down our public schools but then he sent his kids to school," Romero told Carlson. "I looked at Larry's record and believe that he's our best option to really break the monopoly of special interest when it comes to education and to offer, especially Latino and African American families in California school choice options," she said.

Romero said according to statistics, 70% of Latino and 80% of Black children are not meeting proficiency levels in math. School choice is a key reason many minorities are voting for the recall.

"But because of the way in which the schools are run, even when the state identifies a school as chronically underperforming, kids can't get out. You're zip-coded there," she said. "The powerful monopoly of the California Teachers Association, which is a major endorser of the Democratic Party and of course Gavin, it blocks any type of reform."

Beyond failing schools, Californians are concerned about rising crime and skyrocketing homelessness that has tents pitched along public sidewalks, rising taxes and regulation, and an out-of-reach housing market.

For the first time ever, more people and businesses are moving out of California than are moving in.