'It Can't Be Reversed': Conservative Group Reportedly Abruptly Suspended From Facebook With 'No Reason Given' 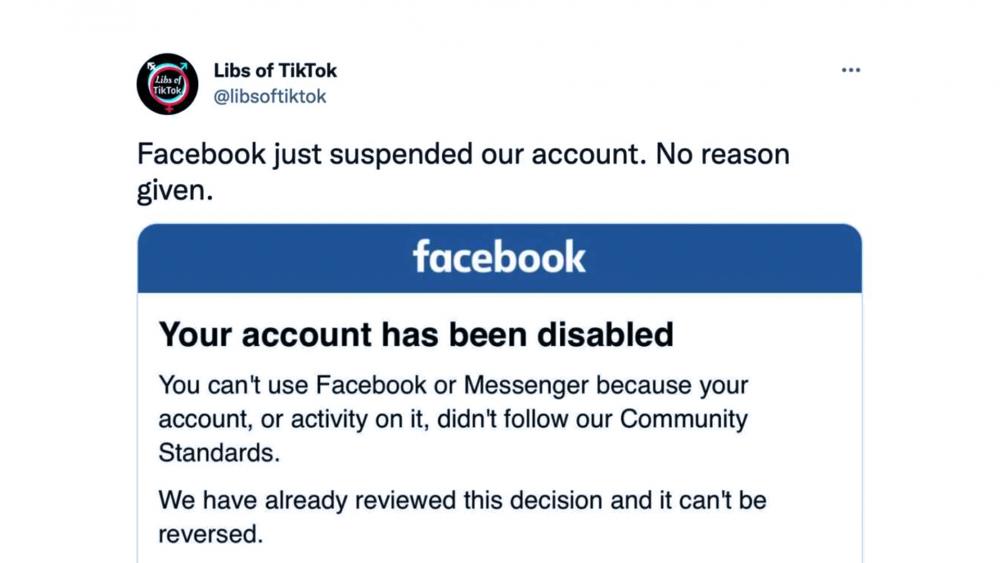 Libs of TikTok, a Twitter account that has gained a massive following for sharing disturbing and oft-strange videos of purported progressive bias in education and other facets of society, has reportedly been suspended from Facebook.

The message was accompanied by a screenshot, presumably from Facebook alleging Libs of TikTok “didn’t follow…community standards” and won’t be able to use Facebook or its Messenger service.

“We have already reviewed this decision, and it can’t be reversed,” the screenshot reads.

Libs of TikTok immediately appealed the decision after the suspension and said, within two minutes, Facebook reportedly responded the determination was final.

“I’m sure we totally got a full and fair review,” Libs of TikTok sarcastically tweeted.

The Libs of TikTok Facebook page was live again as of Wednesday night, though its owner was purportedly unable to access it.

As CBN’s Faithwire previously reported, this is hardly the first time Libs of Tik Tok has found itself in the crosshairs of social media companies. The account has reportedly been banned and punished on Instagram and Twitter in the past, though it is currently active on both platforms.

Earlier this year, the account’s founder was reportedly in hiding after the release of a Washington Post article from columnist Taylor Lorenz titled, “Meet the woman behind Libs of TikTok, secretly fueling the right’s outrage machine.”

The article, which sparked a storm of reactions, publicly named the anonymous account owner and led to threats and consternation.

The individual behind Libs of Tik Tok, though, has refused to back down, continuing to expose videos many conservatives believe expose gender issues and biases in schools and other arenas.

Most recently, Boston Children’s Hospital has faced intense backlash and furor after promoting “gender-affirming hysterectomies” for young girls who identify as transgender. Libs of Tik Tok was instrumental in exposing now-deleted video footage of doctors discussing these issues.

In Arizona, a teacher arranged a drag show for students and was later arrested after allegedly having sex with a student. https://t.co/egPaYZwD5I

In June, Libs of Tik Tok sparked furor by exposing Pride in the Park, an Indiana event dubbed a “family-friendly” drag show.

Libs of Tik Tok shared information on the event, writing, “In Jasper, Indiana, a pride event with a drag queen performance is being advertised for all ages, and they are encouraging kids to bring cash to tip the drag queens.” Pride in the Park was later canceled.

Critics loathe Libs of Tik Tok and accuse the account of sparking misplaced anger, though supporters laud the owner’s effort to expose bias and harmful material that is reaching children.

It’s unclear if Facebook will reverse its purported decision, though CBN’s Faithwire will continue monitoring the situation to provide updates.