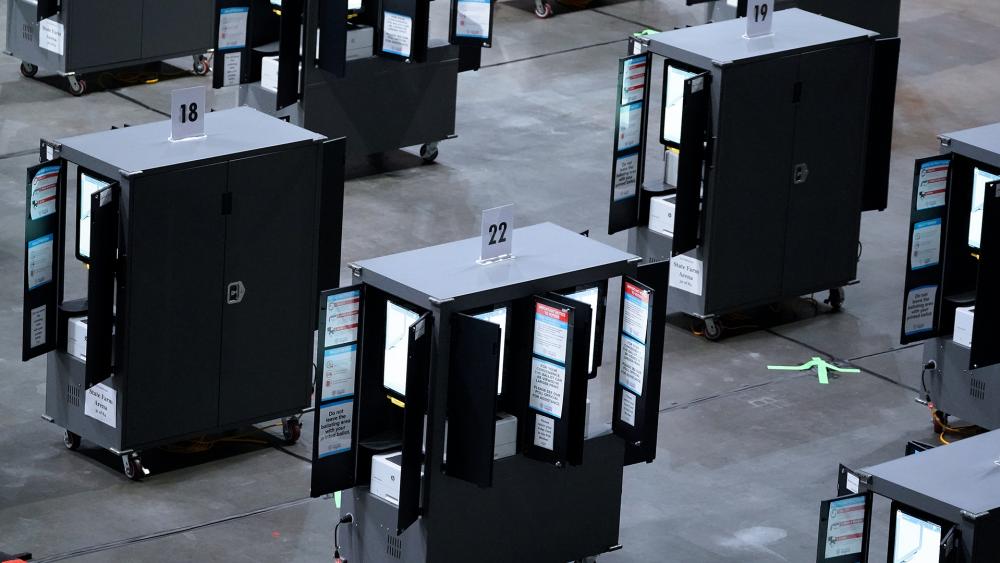 Electronic voting machines from a leading vendor used in at least 16 states have software vulnerabilities that leave them susceptible to hacking if unaddressed, the nation's leading cybersecurity agency announced in an advisory sent to state election officials.

The U.S. Cybersecurity and Infrastructure Agency (CISA) said it hasn't found evidence that the flaws in the Dominion Voting Systems' equipment have been exploited to alter election results, but these systems are vulnerable on multiple fronts. The advisory is based on testing by a prominent computer scientist and expert witness in a long-running lawsuit in Georgia that targeted outdated voting machines in 2017.

In a statement, Dominion defended the machines as "accurate and secure."

The advisory, which was first reported by The Associated Press, details nine vulnerabilities in the machines and suggests protective measures to prevent or detect their exploitation.

CISA Executive Director Brandon Wales said in a statement that "states' standard election security procedures would detect exploitation of these vulnerabilities and in many cases would prevent attempts entirely."

The advisory urges prompt mitigation measures, including both continued and enhanced "defensive measures to reduce the risk of exploitation of these vulnerabilities." Those measures need to be applied ahead of every election, the advisory says, and it's clear that's not happening in all of the states that use the machines.

University of Michigan computer scientist J. Alex Halderman, who wrote the report on which the advisory is based, has pointed out that using digital technology to record votes is dangerous because computers are inherently vulnerable to hacking and thus require multiple safeguards that aren't uniformly followed. He and many other election security experts have said that using hand-marked paper ballots is the most secure method of voting and the only option that allows for meaningful post-election audits.

Halderman explains one of the vulnerabilities could allow an attacker to forge cards used in the machines by technicians, giving the attacker access to a machine that would allow the software to be changed. "Attackers could then mark ballots inconsistently with voters' intent, alter recorded votes or even identify voters' secret ballots," Halderman said.

"They're trying to get ahead of the game and shape the battlefield regarding the citations of the vulnerabilities that we've known about since even before the 2020 election – back when it was in vogue to talk about security vulnerabilities," Colbeck said.

"But somehow, after November 3 the only talking point that was allowed to be talked about was that these were the 'most secure elections in history,'" he added. "That tells you that there's an agenda – and that agenda is not the truth."

In Georgia, the machines print a paper ballot that includes a barcode — known as a QR code — and a human-readable summary list reflecting the voter's selections, and the votes are tallied by a scanner that reads the barcode.

"When barcodes are used to tabulate votes, they may be subject to attacks exploiting the listed vulnerabilities such that the barcode is inconsistent with the human-readable portion of the paper ballot," the advisory says. To reduce this risk, the advisory recommends, the machines should be configured, where possible, to produce "traditional, full-face ballots, rather than summary ballots with QR codes."

The affected machines are used by at least some voters in at least 16 states, and in most of those places, they are used only for people who can't physically fill out a paper ballot by hand, according to a voting equipment tracker maintained by watchdog Verified Voting.

But in some places, including all of Georgia, almost all in-person voting is on the affected machines.

Georgia Deputy Secretary of State Gabriel Sterling said the CISA advisory and a separate report commissioned by Dominion recognize that "existing procedural safeguards make it extremely unlikely" that a bad actor could exploit the vulnerabilities identified by Halderman. He called Halderman's claims "exaggerated."

Dominion has told CISA that the vulnerabilities have been addressed in subsequent software versions, and the advisory says election officials should contact the company to determine which updates are needed.

Meanwhile, Just The News reports the Democratic primary in one Georgia county has been called into question after a hand count revealed the voting machines were off by thousands of ballots.

DeKalb County commission candidate Marshall Orson has asked the local elections board not to certify the election results, citing numerous issues that have surfaced in his race since election day, The Atlanta Journal-Constitution reports.

Orson also asked for a formal recount and an "independent review" of the election in his letter sent to the board on Thursday.

The first election results showed Orson placing first for the commission District 2 seat. Lauren Alexander was second and Michelle Long Spears came in third. Orson would have then been up against Alexander in a runoff.

But Spears found out the results showed her receiving zero votes at most election precincts in the district.

The Georgia Secretary of State's office admitted last month in making several programming mistakes to the voting machines caused the error in the final results.

A re-scan of the ballots was attempted in the race, but this led to a hand count that was finished about midnight on Memorial Day, according to the Journal-Constitution.

The final results released Wednesday night revealed Spears is now in first place and headed to a runoff with Alexander. Orson placed third and is out of the race for the June 21 runoff.

"Numerous issues have been revealed regarding this race and it is imperative that the public have confidence that the results accurately reflect the will of the voters," Orson wrote in the letter. "At this moment in time, the public cannot have such confidence."