Church Cornerstone Still Stands After Tornado Crushes Sanctuary: 'The People Are the Church; Not the Building' 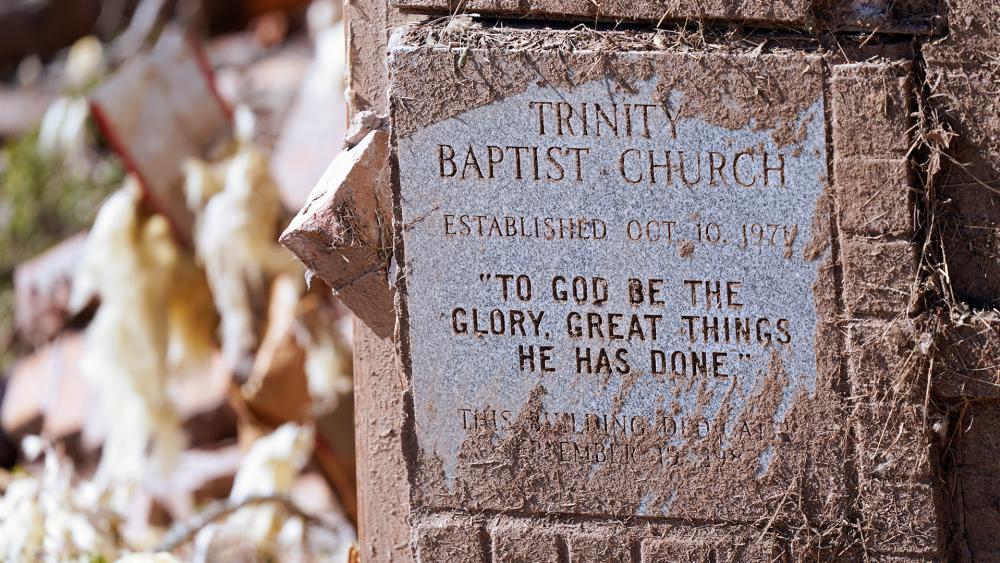 The Trinity Baptist Church cornerstone is covered in debris but still standing after a tornado hit in Idabel, Okla., Nov. 5, 2022. (AP Photo/LM Otero)

Residents in southeastern Oklahoma and northeastern Texas are working to recover, thankful to have survived after a storm stretching from Dallas to northwest Arkansas spawned tornadoes Friday night, producing flash flooding, killing at least two people, injuring dozens, and leaving homes and buildings in ruins.

Preliminary damage reports indicate the deadly storms that moved through parts of Arkansas, Louisiana, Texas, and Oklahoma produced at least an EF3 tornado in East Texas that was possibly even more powerful when it crossed into McCurtain County in southeast Oklahoma and hit the town of Idabel, KTAL-TV reports.

According to the outlet, an EF3 tornado is classified with winds of 136-165 miles per hour, causing severe damage, including destruction to roofs and some walls torn from well-constructed houses; even trains could be overturned; most trees in forested areas uprooted, and heavy cars lifted and thrown.

Morris County, Texas, Judge Doug Reeder said in a social media post that one person died as a result of a tornado in the far northeastern Texas County, offering no other details.

In Oklahoma, Gov. Kevin Stitt (R) went to Idabel on Saturday to see the damage. Keli Cain, a spokesperson for the state’s Department of Emergency Management, said a 90-year-old man’s body was found at his home in the Pickens area of McCurtain County, about 36 miles north of Idabel.

The rural town of about 7,000 at the foothills of the Ouachita Mountains saw extensive damage. “There are well over 100 homes and businesses damaged from minor damage to totally destroyed,” Cain said.

Trinity Baptist Church in Idabel was preparing to complete a new building when the storm ripped apart their sanctuary and flattened the shell of the new structure next door, according to Pastor Don Myer.

The 250-member congregation was to vote after the Sunday service on whether to move ahead with the final work to complete the building, Myer said.

“But we didn’t get to that. Every vote counts and we had one vote trump us all,” Myer, 67, said. “We were right on the verge of that. That’s how close we were.”

Myer said the congregation is going to pray on what happened, see how much their insurance covers, and work to rebuild. On Saturday morning, a few members of the church took an American flag that had been blown over in the storm and stood it upright amid the wreckage of the original church building. 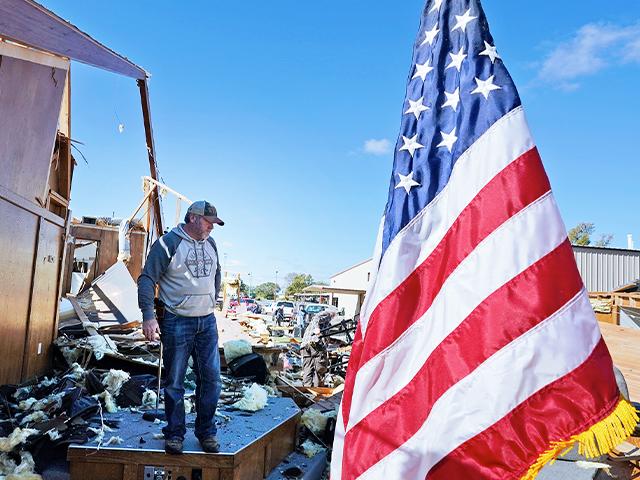 In a post to the church's Facebook page Saturday, the writer noted the cornerstone of the building was still standing following the storm and it was still sharing an important message.

"As we sorted through the rubble this morning, I noticed that our cornerstone still stands. The message on it reads, 'TO GOD BE THE GLORY, GREAT THINGS HE HAS DONE.'"

"As we move forward from here, we trust that our church family is held fast by Christ, our Chief Cornerstone. We look forward to surrendering ourselves fully to God as He walks us through the coming weeks and months," the post continued.

"Thank you, everyone, for your support in this time. Our prayers are with our community in this great time of need. God bless you all," the post concluded.

On Sunday, the church shared photos on its Facebook page showing members of the congregation greeting each other and worshipping together among the ruins of their building.

"What a beautiful morning to worship God as a Family of Friends!" the church wrote.

"210 gathered this morning to praise God in the midst of a heartbreaking situation. Our church has shown great hope through it all, and we trust God to guide us as we look to the future," the post read.

"We thank God, first of all, for His faithfulness and presence in this time," the post continued.

After describing the special worship service, the post noted, "Our service concluded with a heartfelt time of prayer. We have been blessed to hear about the many, many prayers being offered up for our community from across the nation. Please continue to keep McCurtain County in your prayers as many are dealing with catastrophic loss. God bless you all."