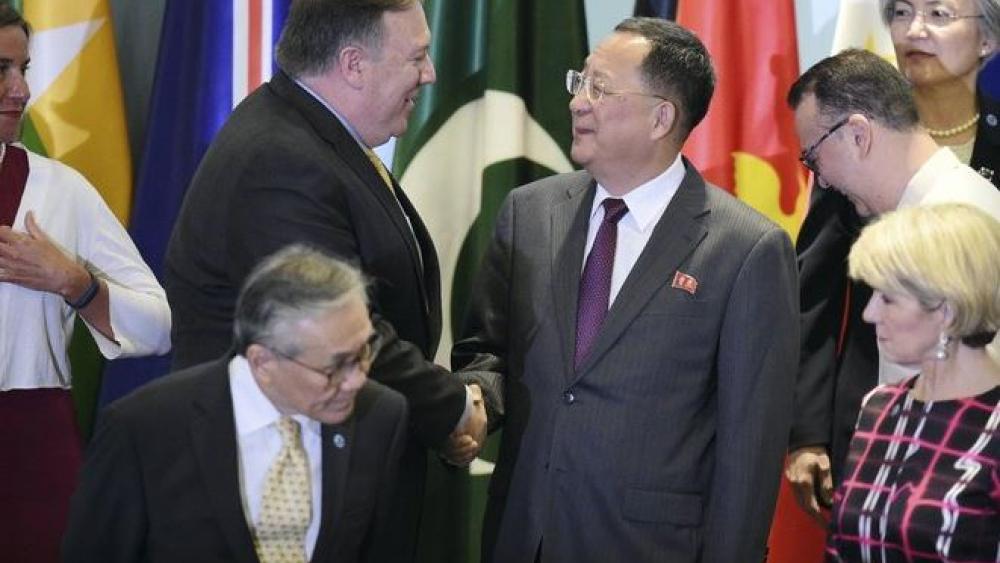 SINGAPORE (AP) — Roller-coaster nuclear diplomacy between the United States and North Korea hit highs and lows on Saturday as the countries’ top diplomats traded polite words and barbs, leaving efforts to rid the North of its atomic weapons at an uncertain juncture.

At a security conference in Singapore, U.S. Secretary of State Mike Pompeo accused North Korea and countries including Russia of continuing to violate U.N. sanctions aimed at pressing Pyongyang to give up its nuclear arsenal. But at the same time, he oversaw the handover of a letter to North Korean leader Kim Jong Un from President Donald Trump and exchanged pleasantries with the North’s top diplomat.

North Korean Foreign Minister Ri Yong Ho, meanwhile, greeted Pompeo with a smile, but then delivered a scathing attack on the Trump administration for approaching the negotiation poorly by insisting on sanctions enforcement. Ri said North Korea would not be forced into acting unilaterally and demanded that the U.S. undertake “confidence building” measures if the negotiation was to be successful.

After Pompeo warned anew that no sanctions would be lifted until North Korea fully and finally denuclearizes, Ri told the annual ASEAN Regional Forum that the North would not be bullied into concessions.

“Confidence is not a sentiment to be cultivated overnight,” he said. “In order to build full confidence between the DPRK and the U.S., it is essential for both sides to take simultaneous actions and phased steps to do what is possible one after another.” North Korea’s official name is the Democratic People’s Republic of Korea.

“Only when the U.S. ensures that we feel comfortable with and come close to it, will we be able to open our minds to the U.S. and show it in action,” Ri said.

The U.S. has previously dismissed calls for a phased approach, insisting that sanctions be maintained until the North delivers on its commitments but suggesting that some other steps may be possible.

Ri, though, appeared unmoved and accused elements of the U.S. government of going against Trump’s wishes by taking a hard line on sanctions.

“What is alarming, however, is the insistent moves manifested within the U.S. to go back to the old, far from its leader’s intention,” he said.

Instead of responding reciprocally to North Korea’s suspension of nuclear tests and missile launches and other goodwill gestures such as the return of suspected remains of American troops killed in the Korean War, the U.S. has maintained hostility, Ri said.

“The United States, instead of responding to these measures, is raising its voice louder for maintaining the sanctions against the DPRK and showing the attitude to retreat even from declaring the end of war, a very basic and primary step for providing peace on the Korean Peninsula,” he said. He also accused Washington of taking “extremely inappropriate moves” by discouraging third countries from sending high-level delegations to the North’s 70th anniversary celebrations in September.

Pompeo had already left the meeting when Ri delivered his remarks in order to travel to Jakarta for talks with senior Indonesian officials. As he arrived in Jakarta, the State Department said that a written reply to Kim from Trump had been delivered to Ri in Singapore.

“We had a quick, polite exchange,” Pompeo tweeted. “Our US delegation also had the opportunity to deliver (Trump’s) reply to Chairman Kim’s letter.”

State Department spokeswoman Heather Nauert said Trump’s reply to Kim was given to Ri by Sung Kim, the U.S. Ambassador to the Philippines who has been leading logistical negotiations with the North on its pledge to denuclearize. Nauert would not address the content of Trump’s letter to Kim.

The White House said earlier in the week that Kim had sent a new letter to Trump and that the president had written a response.

Earlier Saturday, Pompeo warned Russia, China and other countries against any violation of international sanctions on North Korea that could reduce pressure on the North to abandon its nuclear weapons. Pompeo’s comments came on the heels of a new United Nations report that found North Korea has not stopped its nuclear and missile programs and is violating U.N. sanctions, including through illicit ship-to-ship transfers of oil.

Speaking on the sidelines of the Singapore forum, Pompeo told reporters that the U.S. has new, credible reports that Russia is violating U.N. sanctions by allowing joint ventures with North Korean companies and issuing new permits for North Korean guest workers. He said Washington would take “very seriously” any violations, and called for them to be roundly condemned and reversed.

“If these reports prove accurate, and we have every reason to believe that they are, that would be in violation,” Pompeo said, noting that the U.N. Security Council had voted unanimously in favor of the sanctions. “I want to remind every nation that has supported these resolutions that this is a serious issue and something we will discuss with Moscow.”

“We expect the Russians and all countries to abide to the U.N. Security Council resolutions and enforce sanctions on North Korea,” he said. “Any violation that detracts from the world’s goal of finally, fully denuclearizing North Korea would be something that America would take very seriously.”

At the United Nations, a summary of a report by experts monitoring U.N. sanctions against North Korea was sent to the Security Council on Friday that said North Korea is continuing with both its nuclear and missile programs. And, in addition to the oil transfers, it said the North was violating sanctions by transferring coal at sea and flouting an arms embargo and financial sanctions.

Late Friday, U.S. Ambassador to the United Nations Nikki Haley raised the alarm, saying that “talk is cheap.” ″Russia cannot support sanctions with their words in the Security Council only to violate them with their actions,” she said in a statement. She made the remarks as the U.S. asked the Security Council to add a North Korean bank executive, a North Korean company, a Chinese company and a Russian bank to the U.N. sanctions blacklist.

In his discussions with Southeast Asian officials in Singapore, Pompeo said he had implored them all to “strictly enforce all sanctions,” including an end to ship-to-ship transfers of oil for North Korea, and had been encouraged by the response.

Despite the warning to Russia, Pompeo said he remained optimistic that Kim will follow through on his pledge to Trump to denuclearize. But he said the timeline for the North’s full and final denuclearization remains a work in progress. 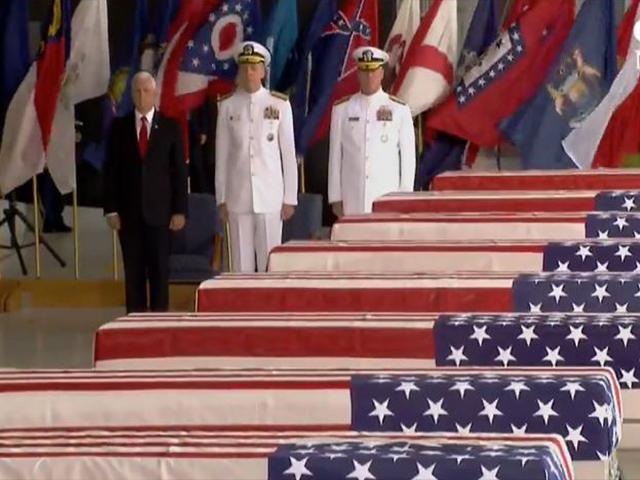 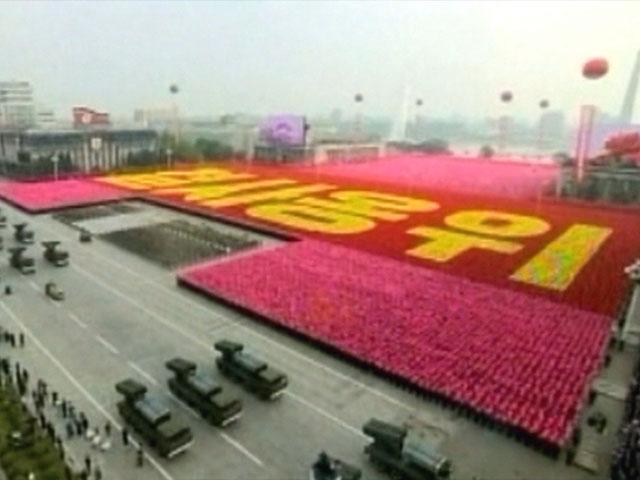 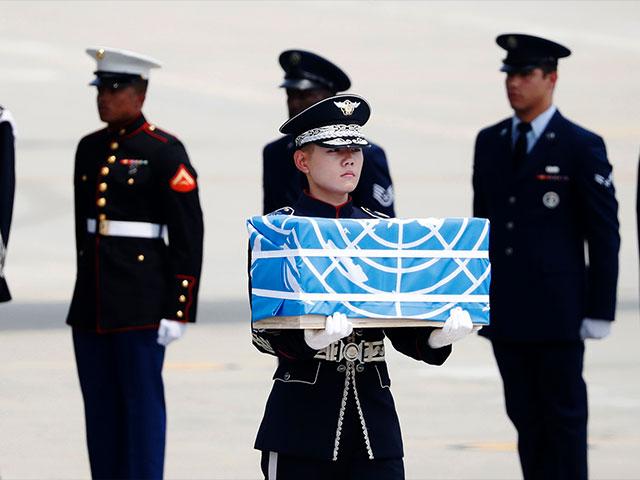