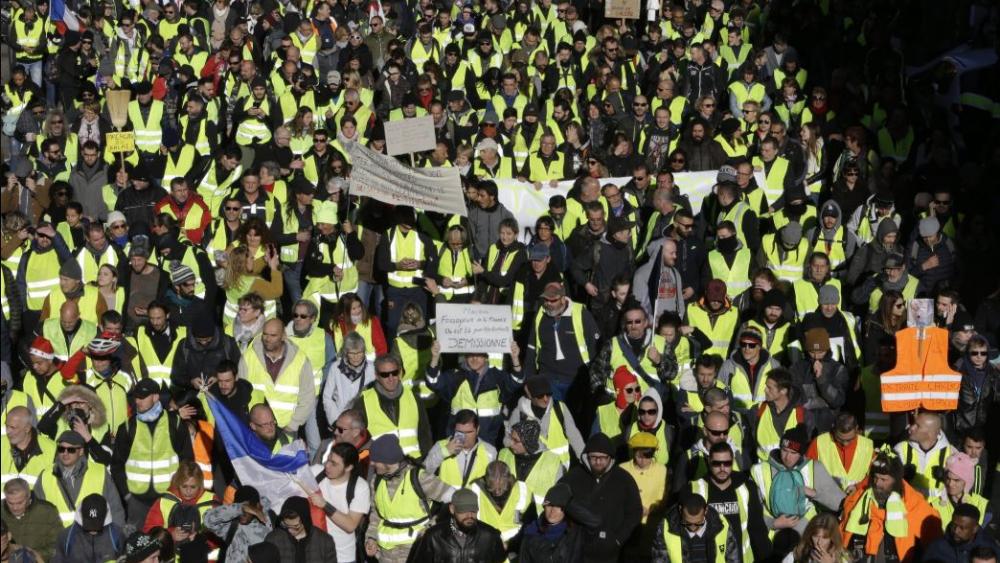 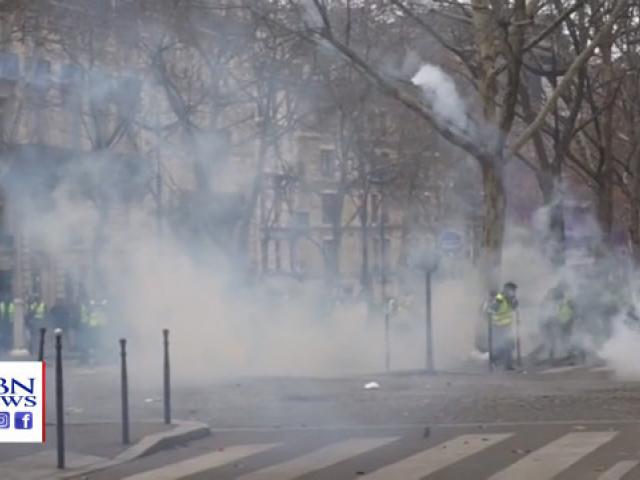 PARIS (AP) — The rumble of armored police trucks and the hiss of tear gas filled central Paris on Saturday, as French riot police fought to contain thousands of yellow-vested protesters venting their anger against the government in a movement that has grown more violent by the week.

A ring of steel surrounded the president’s Elysee Palace — a key destination for the protesters — as police stationed trucks and reinforced metal barriers throughout the neighborhood.

Stores along the elegant Champs-Elysees Avenue and the posh Avenue Montaigne boarded up their windows as if bracing for a hurricane but the storm struck anyway Saturday, this time at the height of the holiday shopping season. Protesters ripped off the plywood protecting the windows and threw flares and other projectiles. French riot police repeatedly repelled them with tear gas and water cannon.

Saturday’s yellow vest crowd was overwhelmingly male, a mix of those bringing their financial grievances to Paris — the center of France’s government, economy and culture — along with groups of experienced vandals who tore steadily through some of the city’s wealthiest neighborhoods, smashing and burning.

Police and protesters also clashed in other French cities, notably Marseille, Toulouse and Bordeaux, and in neighboring Belgium. Some protesters took aim at the French border with Italy, creating a huge traffic backup near the town of Ventimiglia.

The French government’s plan was to prevent a repeat of the Dec. 2 rioting that damaged the Arc de Triomphe, devastated central Paris and tarnished the country’s global image. It did not succeed, even though it was better prepared.

Although Saturday’s protest in the French capital started out quietly, tear gas choked the Champs-Elysees Avenue by early evening.

Interior Minister Christophe Castaner said 135 people had been injured and 974 taken into custody amid protests around the nation.

An estimated 125,000 people had demonstrated around France while 10,000 took their anger to the streets of Paris, double the number in the capital last week, he said. Toughening security tactics, French authorities deployed 8,000 security officers in the capital alone, among the 89,000 who fanned out around the country.

A Starbucks near the Champs-Elysees was smashed wide open and protesters were seen stepping over broken glass and serving themselves to beverages. The window of a nearby bank was smashed in with a wrought-iron decoration used to encircle city tree trunks.

All of the city’s top tourist attractions — including the Eiffel Tower and the Louvre museum — shut down for the day, fearing the kind of damage that hit the Arc de Triomphe a week ago. Christmas markets and soccer matches were canceled. Subway stations in the city center closed and the U.S. embassy warned citizens to avoid all protest areas.

Yet in a sign of the financial disconnect that infuriates many of the protesters, a few blocks from the famed boulevard, people were sitting in Paris cafes, drinking cocktails and chatting.

Amid the melee, President Emmanuel Macron remained invisible and silent, as he has for the four weeks of a movement that started as a protest against a gas tax hike and metamorphosed into a rebellion against high taxes and eroding living standards.

France’s yellow vest protesters have political stances ranging from the far right to the far left but the leaderless group is united in its sense that Macron and his government are out of touch.

“We are here to tell (Macron) our discontent. Me, I’m not here to break things because I have four children,” said protester Myriam Diaz. “But I still want to be here to say ‘Stop, that’s enough.’”

Some protesters sang the French national anthem — “The Marseillaise” — as they confronted phalanxes of police in heavy riot gear. One protester in Paris showed an Associated Press reporter a fresh wound on his jaw, saying a rubber bullet fired by charging police had glanced his face.

“I was running with my hands up. They charged,” said Ludovic, a 38-year-old cabinetmaker from the eastern city of Colmar. He only gave his first name, saying he feared being tracked by security authorities. He said he was fleeing the Champs-Elysees, choked with tear gas, when police moved in.

A scattering of yellow vests, as well as women, children and retirees, were among the 17,000 people marching to demand action against climate change. One sign read “No climate justice without fiscal and social justice.”

Cyril, a 25-year-old garbage truck driver, came from Normandy with three others. He said he earns only 1,430 euros ($1,625) a month despite working 45 hours a week and has decided not to have children because doesn’t feel he can earn enough to raise them. This was his third weekend of protesting in Paris.

“I’ve come to defend myself,” he said, adding that he thought Macron’s mistake was trying to reform the French economy too quickly. “He’s done more in 18 months than the others in 30 years.”

Macron on Wednesday agreed to abandon the fuel tax hike, which aimed to wean France off fossil fuels and uphold the Paris climate agreement. Many economists and scientists say higher fuel taxes are essential to save the planet from worsening climate change, but that stance hasn’t defused the anger among France’s working class.

Late Saturday, after announcing that the violence in Paris had been “contained,” Castaner, the interior minister, took a victory stroll down the Champs-Elysees.

Tear gas had dissipated and a standoff was over. It had pitted a line of security forces, backed by two armored vehicles, against protesters, some lobbing objects and cherry bombs to taunt police.

Belgian police fired tear gas and water cannon Saturday at yellow-vested protesters calling for the resignation of Prime Minister Charles Michel. The protesters in Brussels threw paving stones, road signs, fireworks, flares and other objects at police and about 100 were detained.

Across the ocean, U.S. President Donald Trump seized the moment to once again criticize the 2015 Paris climate accord that he is abandoning.

“People do not want to pay large sums of money ... in order to maybe protect the environment,” he tweeted. 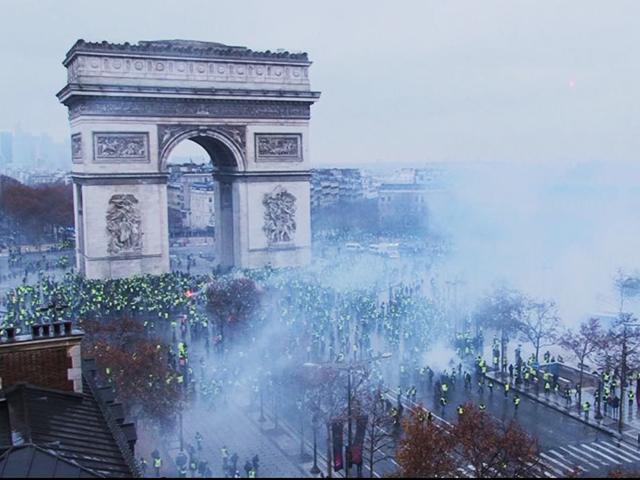