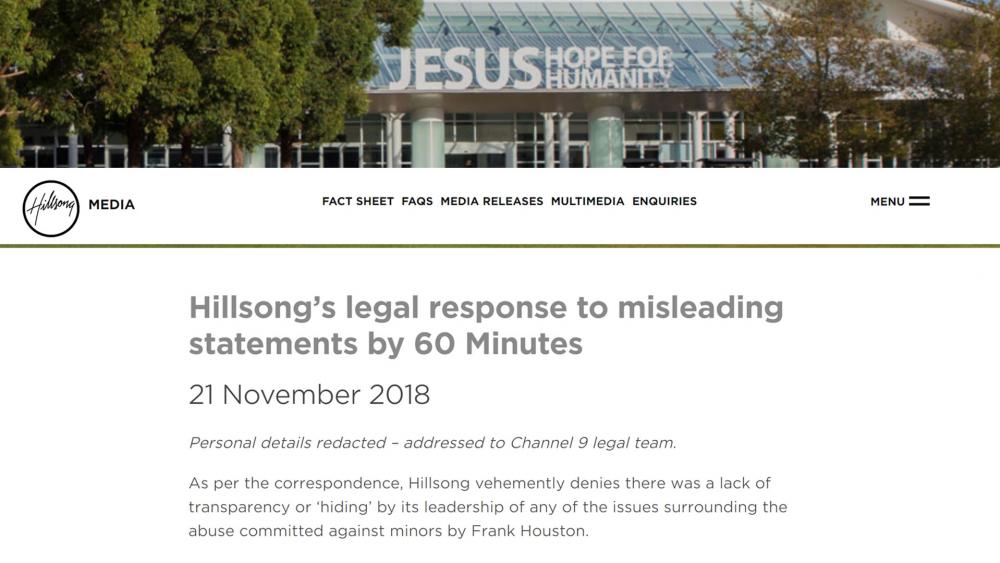 Can a man really be tried for the sins of his father?  This is apparently the case in Australia where the founder of the Hillsong Church is being investigated for allegedly not informing the authorities about sex crimes committed by his father.

A man who claims he was molested by Frank Houston, once an influential pastor of the Assemblies of God in New Zealand, told his story Sunday night on Channel 9's news program "60 Minutes."

Brett Sengstock said he was molested by Houston multiple times during a five-year period almost 30 years ago. Sengstock recalled the abuse in graphic detail during the interview. He claimed Houston began to molest him when he was about seven years of age.

Houston admitted to the molestation before his death in 2004. However, his actions were never reported to the authorities.

The news program and other media outlets have said Houston was a pastor at the Hillsong Church. The church released a statement on its website through their attorney which reads in part:

"Hillsong and Brian Houston (Frank's son) have made it clear on multiple occasions that they are incredibly grieved for the victims and the hurt and pain that the criminal actions of Frank Houston has caused them. The victim you interviewed on your episode is no exception. We wish to emphasize that all of these criminal actions occurred before Hillsong Church existed."

Australian authorities are presently investigating Brian Houston for allegedly not reporting sex crimes committed by his father, according to aol.com.

However, the church board and eldership did respond to the Royal Commission three years ago with a statement about the case.

Among the facts listed by the church elders:

In its latest statement dated Nov. 21, 2018, Hillsong writes, "it is abundantly clear, through available evidence, that the victim was an adult in mid '30s when Hillsong Church and Brian Houston became aware of the abuse, and the victim did not want the matter reported to the police."

In the statement, the church also points out "a list of representations and false statements made on the 60 Minutes program segment regarding the handling of the abuse by Frank Houston following the disclosure of the abuse."

The church also requested that Channel 9 and other media outlets make the following statement on-air: