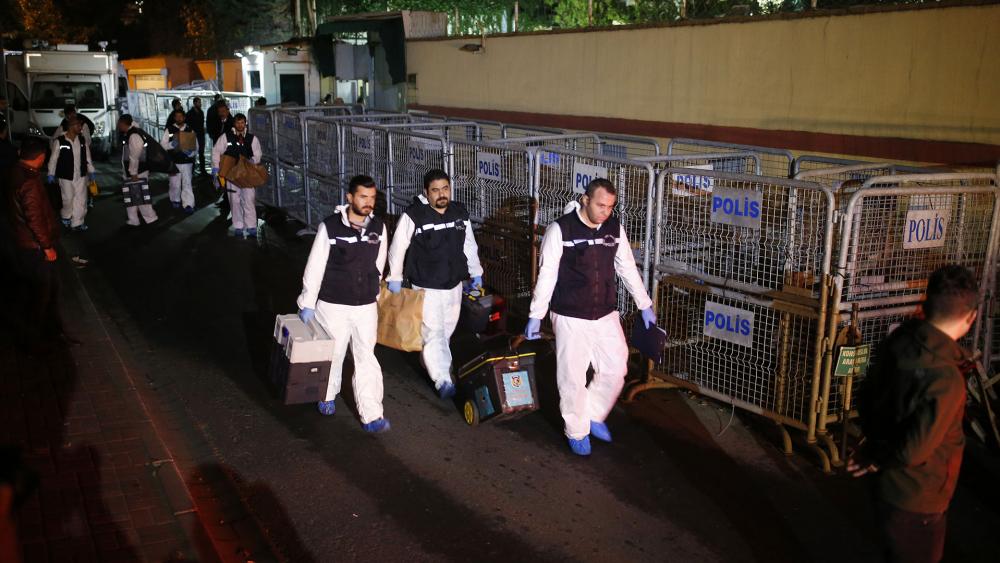 ISTANBUL (AP) - Saudi journalist Jamal Khashoggi was killed in a "fistfight" in the Saudi Consulate in Istanbul, the kingdom said early Saturday, acknowledging the writer's death for the first time. Authorities said 18 Saudi suspects were in custody for his slaying and intelligence officials had been fired.

The overnight announcements in Saudi state media came more than two weeks after Khashoggi entered the Saudi consulate in Istanbul for paperwork required to marry his Turkish fiancée, and never came out. Since his disappearance, the kingdom had rejected Turkish fears he was killed and dismembered there as "baseless," but growing international pressure and comments by U.S. officials up to President Donald Trump appears to have forced the kingdom to acknowledge the slaying.

While it fired officials close to Crown Prince Mohammed bin Salman, the kingdom stopped short of implicating the heir-apparent of the world's largest oil exporter. King Salman, his father, appointed him to the committee that will restructure the kingdom's intelligence services after Khashoggi's slaying. No major decisions in Saudi Arabia are made outside of the ultraconservative kingdom's ruling Al Saud family.

It also appeared to downplay the fact that Turkish officials say an "assassination squad" from the kingdom including an official from Prince Mohammed's entourage and an "autopsy expert" flew in ahead of time and laid in wait for Khashoggi at the consulate.

In a statement Friday night, White House press secretary Sarah Huckabee Sanders said the U.S. will closely follow international investigations into Khashoggi's death and will advocate for justice that is "timely, transparent and in accordance with all due process."

The announcements came in a flurry of statements carried by the state-run Saudi Press Agency early Saturday morning.

"Preliminary investigations conducted by the Public Prosecution showed that the suspects had travelled to Istanbul to meet with the citizen Jamal Khashoggi as there were indications of the possibility of his returning back to the country," the statement read. "Discussions took place with the citizen Jamal Khashoggi during his presence in the consulate of the kingdom in Istanbul by the suspects (that) did not go as required and developed in a negative way, leading to a fight and a quarrel. . The brawl led to his death and their attempt to conceal and hide what happened."

The Saudi statements did not identify the 18 Saudis being held by authorities.

"The kingdom expresses its deep regret at the painful developments that have taken place and stresses the commitment of the authorities in the kingdom to bring the facts to the public opinion, to hold all those involved accountable and bring them to justice," the statement said.

On Wednesday, the Turkish pro-government newspaper Yeni Safak, citing what it described as an audio recording of Khashoggi's slaying, said the squad immediately accosted the journalist after he entered the consulate, cutting off his fingers and later decapitating him.

Turkish crime scene investigators this week searched the Saudi Consulate building in Istanbul and the nearby residence of the Saudi consul general, and came out carrying bags and boxes. On Friday, investigators questioned staff and explored whether his remains could have been dumped outside Istanbul after his suspected killing, Turkish media and a security official said.

The prominent journalist had written columns critical of the Saudi government while living in self-imposed exile in the U.S.

Trump has said that the consequences for the Saudis "will have to be very severe" if they are found to have killed him, but has insisted that more facts must be known before making any judgements.

Trump's previous warnings over the case drew an angry response Sunday from Saudi Arabia and its state-linked media, including a suggestion that Riyadh could wield its oil production as a weapon. The U.S. president wants King Salman and OPEC to boost production to drive down high oil prices, caused in part by the coming re-imposition of oil sanctions on Iran in November.